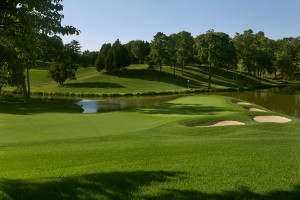 It's been a three-year process to get Congressional (18th hole shown) ready for the U.S. Open. Photo Russell Kirk.

USGA executive director Mike Davis lives and breathes course set-up, and for that reason his stamp has been all over the U.S. Open since he took over responsibility for the championship in 2006. Here’s how Davis has helped to shape the 2011 Open at Congressional.

It started more than two years before the Open when Davis looked at Congressional’s Blue Course hole by hole and discussed possible course modifications with architect Rees Jones and club officials. The first decision was to move some tees back to bring landing areas back into play that had been lost with increased driving distance since the last Congressional Open in 1997. That’s pretty much standard operating procedure these days, but the second decision was more subtle and involved shifting fairways.

“One of the themes at Congressional is that on many holes in the drive zone you had fairway, then a bunch of rough, then the bunkers sitting totally out in the rough,” says Davis. To bring those hazards more into play, Davis suggested moving the fairways closer to the bunkers, often right to the edge of them, making it more likely the ball would roll into them. “It looks better, and it certainly plays better because now those features come into play,” he says. (This did not mean widening the fairways, but shifting the fairway cut to the right or to the left, wherever the most strategic bunkers were located.)

The placement of the new back tees went along with this concept. In some cases, the new tees were not moved straight back but were also shifted at an angle. On the third hole, for example, the new tee is more to the left creating a right-to-left hole where the tee points more toward the now prominent bunkers on the right. On the 11th hole, the fairway was shifted to the right so that it abuts a creek, which is now much more in play.

It was also at this time that Davis determined the sixth hole, a par five for members that had played as a long par four in past tournaments, should be a par five. With water in front and also tight to the right of the green, he felt too constrained in hole locations, figuring that a flag on the right side near the water was just too harsh for a long-iron approach. The hole was lengthened to 555 yards—still very reachable in today’s game. Now Davis feels he can put the hole on the right side, because players have the option of laying up.

In addition to the obvious risk of the water, another subtle touch was added in the course setup, a closely mown area behind the green. “The tendency is going to be to bail out long because you want to clear the water,” says Davis. “But if you do that, you may roll down a big hill and there’s even a stream way back there if you fly the green. The idea was let’s put some risk-reward in.”

The next step was an unplanned one. Congressional decided on its own that it had such agronomic and drainage problems with its greens that they should be rebuilt. This project started less than two years before the Open, a risky move, but it all worked out. With a new strain of bentgrass and improved drainage, the putting surfaces should be firmer, faster, and smoother than they were in 1997 or for the AT&T National that has been played at the Blue Course in recent years.

The plan was to rebuild the greens to exactly the same contours as before—no redesign was intended. But Davis, like a mad scientist, couldn’t resist. He had drawings of all 18 greens in his office, color-coded to show the percentage of slopes in various portions of the greens. He saw that there were areas where they just wouldn’t be able to put hole locations at U.S. Open green speeds. Why not just soften them just a little bit? It wouldn’t even be noticeable to the eye, but a subtle softening of the contours would improve the course by opening up new possibilities for hole locations.

“The difference in slope is ever so slight…but it’s the difference between something working and not working,” Davis says.

Even as the Open approached, Davis continued to think about tweaks. As recently as March, he, Jones, and Congressional officials agreed on a significant change to the par-five 16th. They ripped up the rough around the green, planted bentgrass, and mowed it at fairway height. The green is elevated, with drop-offs on all sides. Depending on tee placement and how far the player hits the ball, it’s a hole that can be reached in two strokes. But now the players have something else to think about, because if they miss the green their ball will roll pretty far off the putting surface and leave a difficult pitch shot.

“The U.S. Open could be won or lost there,” Davis says. “In the last couple rounds, we’ll make sure the hole is short enough where if you hit a good drive you can go for it, so you may see some eagles. But if somebody hits the wrong shot, you may see bogey or double bogey, too.”

As the above comment illustrates, tee placement is something that Davis has been thinking about a lot in preparation for the Open. There has been a lot of hand-wringing over Congressional’s length of 7,574 yards, but in fact it will not play that long in any round. Tees will be moved up on various holes each day in order to make them play differently (more on this here).

Davis was promoted from senior director of Rules and competitions to executive director this spring, but he maintained his U.S. Open course setup duties. That means he will ultimately be the one who decides on those tee placements and he will be running the daily afternoon meetings with USGA officials and course superintendent staff, evaluating the conditions and what needs to be done to get or keep the course the way they want it.

That’s why Davis was out on the course on Monday with other USGA staffers evaluating the five hole locations (one for each round and another for a Monday playoff) that they picked out a month earlier.

“I hit putts to all of the hole locations every day,” Davis says. “I want to see how they react at U.S. Open green speeds. I might move the locations a foot here or a foot there if I find a slightly better one.”

All of the decisions are subject to evaluation and change during championship week due to the conditions, especially the weather. “If it’s real wet and they can throw darts, I may get a little more aggressive with hole locations versus if it’s really dry or if it’s windy, something that would make it harder, then we may back off a little bit,” he says.

What he sees could lead him to have the greens measured for firmness with a device designed just for that purpose, leading to a discussion of how much or how little water to put on them. It’s a safeguard against situations like Shinnecock Hills in 2004—though Davis knows that when courses are set up to play as tough as they do in a U.S. Open that there is always a danger of going over the line.

“Sometimes you have to say to yourself, OK I don’t want to roll the dice here, I’m going to have to play it conservatively,” says Davis. “Then you put too much water on the course and you don’t have it exactly the way you want it. Other times maybe you go on a certain weather forecast and the forecast is absolutely wrong. They say it’s guaranteed to rain tomorrow, so you don’t apply water to the course thinking that Mother Nature going to take care of it. You don’t get rain and now all of a sudden the course is too firm.”

Such are the thoughts that are constantly churning in Davis’s mind—along with rough height, green firmness, fairway width, hole locations, tee locations, wind affects, player skills, and much more.

“How does a Tour pro hit a 5-iron, how much rough can they recover from, where’s the breaking point of the greens being too firm? Those are all things you have to understand about the group of players you’re setting up a course for,” says Davis. “And I think understanding grasses is more important than the average person would believe.”

While all of the details are important, Davis tries to keep in mind the big picture of how the course was designed. “To really get the most out of each course,” he says, “it’s helpful to think about what the architect was intending here.”