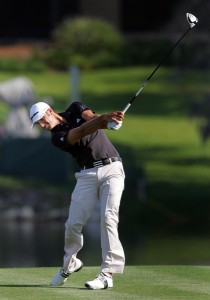 Some thoughts from the second round of the Masters:

There’s an old Augusta National story told about Sam Snead playing a practice round late in his career and telling a young player how he used to hit the ball over the trees to cut the corner with his tee shot on the 13th hole. The young player tried it, and his ball rattled among the pines. “Of course, the trees were much shorter in those days,” Snead belatedly added.

Snead wouldn’t be able to pull that trick on Dustin Johnson today. On Friday, Johnson launched a drive over those towering trees and hit an 8-iron second shot to the 510-yard par five. It was a tee shot that had the caddies and players in the group ahead looking back in amazement when they heard the ball land.

The tee has been moved back 25 yards since the time of that Snead story. That might actually help a player such as Johnson have more space to launch the ball over those trees. But the biggest differences are technology and the stunning power of players like Johnson and Alvaro Quiros, who has also hit an 8-iron second shot into the 13th this year.

In a first-person piece in SI Golf Plus a little more than a month ago, Rory McIlroy said that Tiger Woods is now an “ordinary golfer.” Last August, McIlroy said that he hoped to face Woods in the Ryder Cup, saying “unless his game improves in the next month or so, I think anyone in the European team would fancy his chances against him.”

Granted, McIlroy’s comments were reasonably accurate about the state of Woods’ game. But they have seemed unnecessary and probably unwise for a player to utter, especially considering the smackdowns Woods administered to Stephen Ames and Rory Sabbatini in the past after they spoke about Woods’ vulnerabilities. Better to let sleeping Tigers lie and leave it to the media to make comments about his game.

Now here we are at the Masters and Woods has moved into position to challenge McIlroy, three strokes off the young Northern Irishman’s lead through 36 holes. Both said they are not really thinking about who else is on the leaderboard. True enough, especially at this relatively early stage. The two are not paired on Saturday, but it would be an intriguing Sunday showdown if they play together in the final round.

Last year, in his high-profile return to the golf scene at the Masters, Woods ended up paired with K.J. Choi in all four rounds, the first two at the whim of the Masters committee and the last two because of their scores. Now they will be together again in the next-to-last twosome after both posted 137 totals for the first two rounds.

Choi or fellow Korean Y.E. Yang could do for hybrid clubs what Ray Floyd did for the 5-wood in 1976. When Floyd blew away the field by eight strokes with a record-tying 271 that year, he did it by carrying a 5-wood in order to hit his second-shot approaches to the par-5s higher and land them softer. This was at a time when 5-woods were used mainly by seniors and high-handicappers.

Now Choi and Yang are contending in the Masters with bags that contain no irons longer than a 6-iron, replacing those irons with hybrids. That’s the kind of transitional set currently used mainly by seniors and high-handicappers. Like Floyd, they are doing it in order to hit their approaches higher. Choi went even farther at the beginning of the week, also replacing his 6-iron with a hybrid but he has since put the 6-iron back in the bag.

Bill Kratzert flunked both Rules and history in his commentary on Augusta National’s streaming video on Friday. Kratzert was the analyst as Graeme McDowell was frantically searching for his ball in the thick growth of juniper to the left of the 12th green. At least Kratzert called it juniper, but based on his general “expertise,” I can’t be confident that was right.

Kratzert recalled what he termed a similar situation for Arnold Palmer in the final round in 1958. He described how Palmer had trouble finding a ball on the 12th hole and fuzzily said something about him making a five with one ball and then a three with another ball that was allowed to count. Then he said that after that situation there was a change in the wording of the Rules from a ball “should be found” to “must be found.”

This wasn’t even close. What really happened was that Palmer’s tee shot flew the green and embedded in wet turf behind the green (not into the bushes). There was no trouble finding the ball. Palmer claimed he should get relief for an embedded ball, a Rules official said no.

Palmer hacked his ball out of the lie and made a five. He then declared that he would play out the hole with a second ball and get a ruling from the Committee. He made a three with the second ball, the Committee ruled as he continued to play out the round that the three counted, and he won his first Masters.

Kratzert’s take on the Rules change about a lost ball had no basis in reality. But he wasn’t done messing up on the Rules. As McDowell began to head back away from the green, he angrily tossed away a ball. Kratzert said we would find out if that ball was McDowell’s original or another he had found depending on whether he went back to the tee or to the drop area. But the drop area is only an option for a ball in the water hazard fronting the green, not for an unplayable ball, so there was no way he could use the drop area in any case.

McDowell actually could have gone back to the tee for either a lost ball or unplayable ball. But it must have been lost, because it clearly appeared that the two club-length relief option for an unplayable ball would have gotten him out of the undergrowth because they were searching very close to the edge of it.

By the way, the controversy about Palmer wasn’t so much about whether he should have gotten relief (it seems pretty clear the Committee was right and the official wrong) but whether he followed proper procedure in playing out one ball and only then playing the second ball. Under the current Rules, the player must declare his intention to play a second ball before taking further action after the doubtful situation arises. But the wording of the Rule was different in 1958 and we don’t know exactly what Palmer said and when he said it, so there’s no way to know if the decision was correct or not.

Also by the way, I recall Scott Simpson losing a ball in that same area in the early 1980s in a round where he had shot a 31 on the front nine. After the round, a frustrated Simpson said, “Yeah, you lose a lot of balls at Augusta National,” a course famous for its lack of rough.