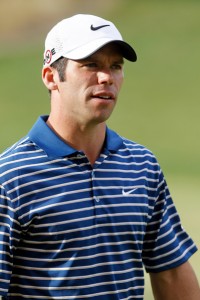 Paul Casey would have made the 2010 European team under the new system. Credit Icon SMI.

Well, I wasn’t expecting that. Based on a suggestion from Ryder Cup captain Jose Maria Olazabal, the European Tour’s tournament committee announced that the number of captain’s selections would be reduced from three to two in 2012.

The top European players compete on world schedules that limit their appearances on the European Tour. This is even true of those who are not members of the U.S. PGA Tour—Lee Westwood played in only seven European Tour events in 2010, not counting majors and World Championship events. You would think that a captain would want more flexibility under those circumstances.

In the fine print, however, Olazabal made a savvy move that will improve the chances of the best players becoming automatic qualifiers. Before, the top five players (reduced to four in 2010) from the world ranking points list were taken first and then the next five came from the European Tour points list. Now, they will start with the European Tour list.

How does the change help? Because you go deeper onto the second list than you do the first one.

In 2010, it happened that the first four players on both lists were the same (Lee Westwood, Martin Kaymer, Rory McIlroy, Graeme McDowell). That meant the team was filled out by the fifth through ninth players on the European Tour list. But if the process had been reversed, it would have been filled out by going down to ninth on the world list instead.

What would that have meant for the team? Edoardo Molinari, Luke Donald, Padraig Harrington, and Justin Rose would have qualified on points, along with Ian Poulter (he would have earned a spot as fifth on the European list; he was also seventh in world ranking points). Francesco Molinari, Ross Fisher, Miguel Angel Jimenez, and Peter Hanson would not have qualified, assuming nine automatic qualifiers as in 2010. Francesco Molinari would have joined the automatic qualifiers if 10 players made it, as under the 2012 system.

You will note that all three of Colin Montgomerie’s captain’s selections—E. Molinari, Donald, and Harrington—would have automatically qualified. That would have left him free to pick Paul Casey (controversially omitted from the team), Francesco Molinari, and either Fisher or Jimenez.

The bottom line is that Casey and Rose would have been on the team in place of Hanson and either Fisher or Jimenez. (Fisher probably would have gotten the nod on merit. It would have been an interesting decision, considering Jimenez’s experience and team spirit. But his Ryder Cup record was pretty poor prior to 2010). That’s definitely a stronger team.

It happens that the 2010 team would have looked the same under this system whether there were two captain’s picks or three, assuming that F. Molinari would have been selected. What if there had been four captain’s picks? Taking four players from the European list and then four from the world list, Rose is the odd man out among automatic qualifiers but he would have been a likely captain’s pick, leaving the roster the same.

The Olazabal method is likely to produce a stronger group of automatic qualifiers by going deeper on the world list. That means it subtly sabotages the European Tour’s incentive for its players to compete more in Europe. While it makes it far less likely that a captain would have to make a choice that leaves a player of the caliber of Casey off the team, he still might have a difficult decision between a more European-based player versus one who plays a lot in the U.S.

I’m not going to give Olazabal a total pass on his reduction of captain’s picks to two, especially when you consider that the U.S. captain now has four, a change Paul Azinger made in 2008. In the 2010 scenario it doesn’t really make a difference, but there are other possible scenarios. Even in 2010, what if Sergio Garcia hadn’t lost his game and desire, and been in the mix for a captain’s pick? In a future year if the tops of the two lists are less similar, that would mean losing some of the advantage of being able to go farther down on the world list for automatic qualifiers.

With the varying schedules of European players, more flexibility would be a good thing. If you went only four deep on each list for automatic qualifiers, you could always pick the next players on the lists in the absence of a clearly better choice. But it’s the part of the Olazabal system that didn’t get the headline that is really the key change, and a good one for the strength of the European side.