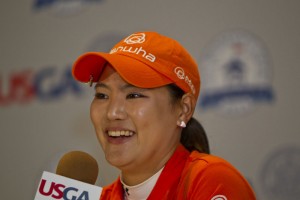 So Yeon Ryu made an impression at the U.S. Women's Open with her play, her smile, and her ability to communicate in English.

Two Koreans met in a playoff for the U.S. Women’s Open. Bad news for the LPGA Tour?

Not if you were watching the tournament. If you were, you saw two young, engaging, smiling, and, yes, attractive players delivering great golf with the game’s biggest title on the line, and even delivering good interviews—in English—afterwards. It’s only a shame that weather delays kept most of it off network television, leaving most of the action to ESPN2 and the final drama to Monday morning, cutting down the size of the audience.

The winner, 21-year-old So Yeon Ryu, was a revelation. A college junior (but a professional with six victories on the Korean Tour), she has played less than a handful of tournaments in America. She must have received A’s in her English courses back home. After finishing her regulation round on Monday, she did a thoroughly engaging interview with Roger Maltbie, expressing herself very well and coming off as a sweet, friendly girl.

After that, she signed autographs and even posed for pictures with fans as she waited for the playoff (there were still some players on the course finishing regulation play before the playoff could begin). Then she walked down the fairways of the playoff with a big smile, enjoying the moment. Meanwhile, she was hitting her drives down the middle of the fairway, her irons right at the flag, and her putts into the center of the hole: After a birdie on the 72nd hole to force a playoff, she birdied two of the holes in the three-hole playoff.

As for the runner-up, Hee Kyung Seo, she’s known back in Korea as “the Supermodel of the Fairways” for her height, elegance, and sense of style. She turned 25 last week and is a rookie on the LPGA Tour, though she won a tournament last year playing on a sponsor exemption granted by Korean sponsor Kia.

Despite her limited amount of time in America, her English is pretty good, too. As it worked out, Seo caught a bad break by finishing Sunday night, because she had to go out cold in a playoff against a player who had just played those same three holes, but she was gracious in defeat. Her play was impressive, too, most notably rounds of 68-68 on a 36-hole Sunday under U.S. Open conditions to bring herself to the brink of the title.

It’s still true that success by American players is a key to the growth of the LPGA Tour, especially in light of how the number of tournaments staged in the U.S. has dwindled. But if either Ryu or Seo emerges as a force, it wouldn’t hurt.

Oddly, this was the first win by a Korean on the LPGA Tour this year—Taiwan’s Yani Tseng has been doing the honors for Asia with four wins. That’s partly because of the LPGA’s criminally thin schedule, with only 10 tournaments played before the Women’s Open. And partly because while there has been a wave of good Korean players in the past decade, there hasn’t quite been a breakout player. That’s perhaps a little unfair, since Jiyai Shin and Na Yeon Choi led the money list in 2009 and 2010, respectively, but neither has been playing particularly well in 2011.

Frankly, it’s tough to keep the Korean players apart. The names are part of it, and I’m not being an ugly American by saying so. Even K.J. Choi, the top male Korean, once said when asked about Koreans on the LPGA Tour, “Too many Kims!”

With such a large contingent of Korean players, and different ones popping up to occasionally win tournaments, it’s tough to keep them apart. Was it Eun-Hee Ji or Eunjung Yi who won the 2009 U.S. Women’s Open? I always have trouble remembering. (It was Ji. But Yi did win in Toledo in 2009. Neither has won since.)

I’ve typed “So Yeon Ryu” and “Hee Kyung Seo” a bunch of times in the last few days, and each time I still have to look up the name because I can’t rely on my memory (it doesn’t help that one’s first name is nearly the same as the other’s last name). Time might take care of that, but only if either one becomes a frequent winner or constant contender.

I have to say it was a bit comical to American ears to have two players in the playoff whose names are pronounced “You” and “So,” leading to such exchanges as, “Where is you, Roger?”

The first Korean player to try to distinguish herself from the pack by thinking about how to call herself was Birdie Kim, who won the 2006 U.S. Women’s Open. Unfortunately, Birdie hasn’t given us any reason with her play since to remember her—she hasn’t even made a cut since 2009.

Initials are a good idea. It’s worked pretty well for K.J. Choi. On the LPGA Tour, I.K. Kim is an easier handle than In-Kyung. And the best is N.Y. Choi, giving her the memorable nickname NYC.

Then again, if all Koreans went by initials, that could get confusing, too. And S.Y. Ryu doesn’t quite have a ring to it. But it will be interesting to see if she can build on her victory, instead of fading back into the woodwork as U.S. Open champs Birdie Kim, Inbee Park, and Ji have done.

She certainly seems to have the potential for greatness. Ryu turned pro at the age of 17 and immediately won on the Korean Tour at that age. She’s been doing on her side of the Pacific what Michelle Wie has been doing here, combining college with playing the Tour, but with more success. In 2009, Ryu narrowly was beaten out for Korean Player of the Year honors by Seo, but then beat Seo in a playoff in the first event of 2010 (a precursor to the Women’s Open).

Now she faces a choice of whether to return to college or take an LPGA Tour card immediately. Or perhaps she could still do both, though it would be harder to do from Korea than for Wie from Stanford. In any case, we should be seeing Ryu on these shores frequently before too long, following in the footsteps of Shin and Seo, who joined the LPGA Tour after being the leading player in Korea.

With that smile, those English skills, and that golf talent, Ryu could even be a top attraction on these shores. Though it’s best not to get ahead of ourselves—the same could have been said about Grace Park a few years ago.