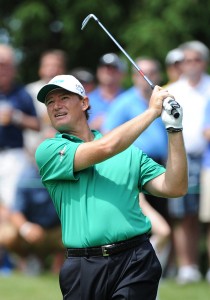 There has been plenty of talk about Robert Allenby as a Royal Melbourne specialist on the Presidents Cup team, but what about Ernie Els?

Allenby grew up nearby, loves the course, finished second there in the 1991 Australian Open as an amateur and won the 1992 Johnnie Walker Classic and 1993 Players Championship there in his first two years as a pro.

But Els has some more recent history, winning the Heineken Classic at Royal Melbourne in 2002, 2003, and 2004, then finishing second in 2005. That accounts for the the course’s entire four-year run as host of that event.

Els’s 2004 win was one of the strangest victories of recent times. He shot a 60 in the first round and carried an eight-stroke lead into the final round. He proceeded to lose all of that eight-stroke advantage with a 42 on the front nine, falling into a tie with Adam Scott (another 2011 Presidents Cup team member). Els then birdied four of the first five holes on the back nine on the way to a 32 for a 74 and a one-stroke victory over Scott.

Captain Greg Norman, by the way, should also be able to impart local knowledge—he won three of his five Australian Opens at Royal Melbourne.

Els’s 60 led to cries that Royal Melbourne, which plays at about 7,000 yards (just under then, just over now), was obsolete as a tournament site. As far back as 1991, the last time the Australian Open was played there, Jack Nicklaus called it a “good members’ course.”

Nicklaus later explained that he meant it as a compliment. Much like Augusta National, another Alister MacKenzie design, Royal Melbourne has wide fairways that enable the average player to get around, but subtleties—undulating greens, drop-offs around the putting surfaces, and placement of bunkers—that make it a challenge for the best players when the greens are especially firm and fast. In fact, Royal Melbourne embodies the principle of being a course for everyone even more than Augusta, since it doesn’t have water hazards.

The challenges become more evident when the wind is blowing, which it wasn’t when Els shot his low number on a course rated among the world’s 10 best. But in any case, the Presidents Cup is a match-play event, which makes scoring less of an issue. The scores might be low because the course is fairly short, but what matters is that the golf is interesting and at Royal Melbourne the rewards don’t come without some risk.

This is Royal Melbourne’s first event since 2005. There haven’t been a lot of changes since then. Four holes have been lengthened by small to moderate amounts, but that includes two par fives and a short par four that will still be reachable in less than regulation. There are only two par fives this time, with one hole that normally plays as a par five changed to a par four from a shorter tee box.

A fairly subtle change is a switch to Legend couch grass on the fairways, which is a bit stickier so that the drives won’t get quite as much roll. An area of fescue grass was installed around the greens in order to preserve the ability to bounce the ball onto the putting surfaces.

The greens use a strain of grass called Suttons mix, which came from England in the 1920s but now is found only at Royal Melbourne. The club switched to Penncross bent greens from 1989 through 1999, a period that included the 1998 Presidents Cup, but unhappy with those surfaces work began in the mid-1990s on developing a “new” Suttons mix. The greens were converted to the new Suttons in 1999, allowing for the firm, fast surfaces for which Royal Melbourne is famous. Those greens have recovered from drought-induced problems that plagued them late in the last decade.

There have been some changes to the configuration of the Composite Course since the last Presidents Cup. Royal Melbourne has West and East courses, the West designed in 1926 by MacKenzie and the East a few years later by his Australia associate Alex Russell. While the West is one of the world’s greatest courses (ranked 13th in the world by Golf Magazine), it has four holes across a road. When the World Cup came to Royal Melbourne in 1959, it was decided to create a composite course choosing 18 of the 21 holes that are in the main “paddock” to avoid any road crossings. (The East course has 11 holes across a different road.)

The Composite includes 12 holes from the West and six from the East. There have been three different orders of holes used, including a new one for the 2011 Presidents Cup. This is the first time a different hole has been used, with the par-three 16 East (it’s the 14th on this Composite routing) in play instead of the nearby par-three 4 East. This was done to greatly improve spectator viewing on the par-four 3 East (13th Composite). The “new” hole is shorter, but, again, with match play scoring isn’t as much of an issue.

The routing has also changed so that the old Composite 18th (18 East) will now be played as the 16th. The thinking was that this will be good for spectators, as nearly all matches will reach that strong hole with its green next to the clubhouse. The new Composite 18th (2 West and formerly the 10th on the Composite) is another strong par four—converted from a par five, played from a shorter tee box, with its green also near the clubhouse.

Another positive effect is that the par-five 15th is a good swing hole down the stretch, whereas the last Composite didn’t have a par five after the 10th and finished with seven straight par fours.

The last time the Presidents Cup came to Royal Melbourne, the U.S. was dusted 20.5 to 11.5 for its only loss in the eight times the Cup has been contested (with one tie). On that occasion, the U.S. players were unenthusiastic about having to travel halfway around the world, and the Internationals took advantage.

The U.S. seems more sanguine about the journey this time, with eight team members having competed in the Australian Open last week and another in Singapore. Three of the U.S. players were on the 1998 team at Royal Melbourne, Tiger Woods going 2-3, Jim Furyk 1-3, and Phil Mickelson 0-2-2. Woods, by the way, played two of his team matches with Fred Couples, this year’s captain, going 1-1. Woods and Furyk won their singles matches and Mickelson halved his, but it was too late as the Americans were hopelessly behind after the first three days.

Els is the only 2011 International player who was on the 1998 squad. He went 3-1-1, another positive experience at Royal Melbourne. Allenby was heartbroken to miss that team after playing in 1994 and 1996, failing to qualify or be a captain’s pick due to a down year in 1998 after suffering an injury at the end of the previous year. He didn’t make it on points this time, but captain Norman picked him this time.