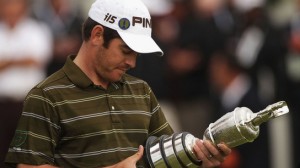 Was Luis Oosthuizen's victory a once-in-a-lifetime moment or a sign of what's to come?

Whenever an unexpected player breaks through and wins a major, the questions are always immediately asked, “Is this guy for real or a fluke?” and, “Will he win another major?”

I guess it’s human nature. It would seem churlish to badmouth a guy who has just won a major championship. Perhaps more to the point, it would go against what we’ve just seen with our own eyes. We just watched the man win a major championship. Ergo, he must be very capable of winning majors in the future (we seem to forget that there are only four majors a year and dozens of players who might win them).

The same discussion occurs when a young hotshot hits the Tour and wins once or twice. Nearly always there is some mention of young phenoms of the past who have flamed out, but nearly always it is stated that this guy is different, he’s the real deal. Yes, I have been guilty of this. I still remember writing that about Robert Gamez when he won twice as a rookie in 1990. Oh, by the way, he didn’t win again for 15 years.

I am writing this, of course, in the wake of Graeme McDowell winning the U.S. Open and Louis Oosthuizen the British Open. Neither of them came completely out of nowhere (though Oosthuizen was a 200-to-1 shot), so I will go along with saying that they aren’t flukes. (Even if I thought they were, I probably wouldn’t say it—I’m no churl.)

But the common view seems to be that this was their breakthrough, and that they will henceforth be forces to reckon with in the majors and probably collect more titles. I’ll have to see more before I go along with that.

The arguments for Oosthuizen are that he’s got a great swing, that he blew away the field at St. Andrews, and that he proved in the final round that he can handle pressure.

He certainly does have a great swing. ESPN’s commentators were raving about it, especially Tom Watson. (At one point, another of the commentators told Watson that Oosthuizen’s swing looks a lot like his, and Watson said, emphatically, “That’s better than mine!”)

As for blowing away the field, Oosthuizen’s favorable draw in tee times in the first two rounds probably had something to do with that. I think it’s safe to say he would have won anyway, but if the afternoon starters hadn’t been blown away by the wind on Friday chances are that a couple of them would have finished less than seven strokes behind.

Regarding pressure, I agree that it’s not easy sleeping on and playing with a 54-hole lead, especially when you’re a young player trying to prove yourself. You only have to go back four weeks to find an example of how tough it can be (that’s a Dustin Johnson reference).

In assessing Oosthuizen’s future, you have to consider that he had missed the cut in six of the seven majors he had played in, and finished dead last in the one where he made it all 72 holes. He had missed the cut or withdrawn in five of his previous seven tournaments coming into the British Open. And he owned only one victory on the European Tour.

Could it be that he just caught lightning in a bottle? That his game was exceptionally well suited to St. Andrews? That he will revert to his previous form now that the magical week is over?

Well, no, I don’t think he will be missing cuts in most of his majors from here on in. But I’m definitely in a wait-and-see mode.

OK, here’s where I get part of the way back on the bandwagon. I really was impressed with Oosthuizen’s demeanor. He seemed to be able to treat the final round of the British Open as just another round. And he seemed grounded enough that he will be able to gain confidence without letting this win go to his head.

And, of course, there is that great swing, one that looks like it should hold up for a long time. There is his ability to hit the ball both long and straight off the tee. The European Tour stats this year show him 29th in distance (293 yards) and 44th in accuracy (66 percent of the fairways), a very good combination. A look at prior years shows that he’s always been long, but that his accuracy left a lot to be desired until 2009, when he started hitting more fairways while giving up a few yards in distance. That shows that he may be coming into his own now at the age of 27.

McDowell, three years older, came into the U.S. Open with a better pedigree—some European Tour wins and a bunch of top-25 finishes in majors. But I’ve got to say that in a way I like Oosthuizen’s chances better, because his game looks like it has more upside.

In winning the U.S. Open, McDowell impressed me as a gritty player with a good game. He almost certainly will win some more events on the European Tour and on the PGA Tour if he elects to play in the U.S., and should be a regular on Ryder Cup teams. I see him staying in the top 30 or 40 in the world for quite a while. But did he look like a guy who’s going to be pounding on the door at a bunch of majors? I don’t think so.

If he can drive the ball anything close to the way he did at St. Andrews, Oosthuizen has a chance to be a top-10 player. That’s a big if, though, and that’s why I’m reserving judgment.