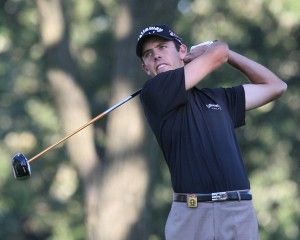 It was set up to be a relatively dull Masters Sunday. Rory McIlroy had a four-stroke lead over a quartet of players who were good but hardly a murderer’s row. Tiger Woods was seven strokes behind, with eight players in front of him.

The impact of this Masters seemed more likely to come from the crowning of 21-year-old McIlroy as the second-youngest champion than any final-round drama. If there was to be drama it would require a McIlroy collapse, which had the prospect of making it as much a sad Masters as a stirring one.

Well, we got the collapse, which was a tragic story to match Ken Venturi in 1956 and Greg Norman in 1996. But we got so much more. The McIlroy story line was eclipsed by the wildest back-nine shootout in Masters history: Never before have eight players held at least a share of the lead during the back nine.

In back-nine drama, there were shades of the 1986 Masters, minus the star power of that Jack Nicklaus-Seve Ballesteros-Greg Norman-Tom Kite shootout. But the major it most closely resembled was another one from 1986, the U.S. Open at Shinnecock Hills where 10 players were tied for the lead as the final twosome reached the turn.

Ray Floyd ended up winning that one by two strokes, as did Charl Schwartzel at Augusta National on Sunday. But Schwartzel’s surge came later than Floyd’s, waiting until the last four holes to take command with four straight birdies, making the excitement last until the 72nd hole.

Was it one of the two or three greatest Masters ever? Probably not, because, although Tiger Woods was involved, it wasn’t a clash of titans in the mold of 1986, 1975 (Nicklaus-Johnny Miller-Tom Weiskopf), or 1954 (Sam Snead-Ben Hogan).

It most resembled a couple of Masters won by relatively unheralded players in spectacular fashion. In 1959, Art Wall birdied five of the last six holes to pass 12 players, including Arnold Palmer, and win by one stroke. The 2011 Masters probably falls a bit short of 1987, where Larry Mize chipped in to win a playoff over Ballesteros and Norman in a tournament that featured the closest down-to-the-wire finish ever—not only were there three tied at the top but three more finished one behind.

This one wasn’t that close at the end, but that was only thanks to Schwartzel’s unprecedented feat of making birdies on the last four holes, a finishing burst that will live on in Masters lore.

Schwartzel’s sprint to the finish means that there was less of a “what if” quality to this Masters for the other contenders. As it turned out, a stroke here or there wouldn’t have mattered. But with such a large cast of characters, it’s worth taking a look at what they will take away from this Masters.

Charl Schwartzel: This wild Masters was won by one of its calmest, low-key competitors. Perhaps that’s why he was able to feel so comfortable over the birdie putts on the last four holes. The main takeaway for Schwartzel is that in his first chance at a major, he handled the heat. Oh, by the way, his heroics weren’t limited to the last four holes. He started the round by chipping in for a birdie on the first hole and holing out for an eagle on the par-4 third, strokes that involved both skill and good fortune.

Adam Scott: A very encouraging tournament for the 30-year-old former phenom whose career had taken a dip in the past couple of years. Now he’s back on track to possibly fulfill his early potential, and the best sign is that he’s putting well since switching to a long putter. The stroke even held up on Augusta’s treacherous greens. Also a positive is that he was the first one to emerge from the pack to take control and did nothing to squander it at the end; Schwartzel’s finish was simply too good. It was Scott’s best showing in a major—even in his good years early in his career he didn’t shine in the biggest events.

Jason Day: The 23-year-old birdied the last two holes when it appeared that such a finish would get him into a playoff. He took a couple of years to get his footing after coming from Australia to the U.S. as a 19-year-old, but made great strides last year. This was another big step forward.

Tiger Woods: Tiger’s naysayers and supporters both gained ammunition on Sunday. The 31 on the front nine was vintage Woods, the missed three-footer and four-footer on the back nine with the tournament on the line was nothing like the killer closer we used to know. My take: While the back-nine hiccups show he’s not all the way back, this tournament marked significant progress for Woods.

Geoff Ogilvy: He’ll always remember the five straight birdies on the back nine and so will most viewers: They came at a time when we were thinking, “This is crazy. What else can happen now?” Charge came too late, but it was his best Masters finish. Avoided the big numbers that have been his bugaboo at Augusta in the past.

Luke Donald: Speaking of what else can happen now, Donald’s 18th hole added to the craziness even though it was too late to affect the outcome: great approach from a terrible stance on the slope of a fairway bunker hits the flagstick and ricochets off the green, Donald says “take that!” to the bad break by chipping in. Tie for fourth keeps him in the top rank of players, question is whether he will add more wins to his Match Play triumph. Tee shot into the water on the 12th was a bad mistake; showed resiliency in fighting back from that and also from a bad start in the first round.

Angel Cabrera:: Amazing how he doesn’t pop up very often but when he does it’s in a major. Didn’t win it this time, though. If he had, his tally would have been three PGA Tour wins, three majors.

K.J. Choi: Remarkable stat that he was either second, third, or fourth after seven straight Masters rounds in 2010-11 until slipping to a tie for eighth on Sunday. Nice player, but don’t know if he has quite enough ammunition to win a major. His plan of replacing his irons up to the 5-iron with hybrids worked out well.

Bo Van Pelt: The least likely player on the leaderboard, and lone American other than Woods. Got into the thick of things even faster than Ogilvy by making eagles on the 13th and 15th, but couldn’t stand the rarified air as he bogeyed 16 and 17.

Rory McIlroy: Hard to say how this will affect him. At 21, is he already on the way to being another Norman, defined by his major losses? He says he’ll be back as strong as ever, but a final-round 80 to lose a four-stroke lead has to be a hard thing to get over. Then again, he’s still got so much time in front of him and so much talent that he may be all right. It was a quick and ugly departure from the lead, hitting two trees on the 10th hole on the way to a triple bogey and getting so shaken that he missed two-footers on the next two holes. Has to keep it together better than that; he was only two strokes off the lead with eight holes to play after the 10th. Handled himself with class afterward, not only with a gracious TV interview but also answering all reporters questions on the way to, and inside, the clubhouse. Undoubtedly won fans with that, just as Norman did after his 1996 debacle.

One Response to “Takeaway Thoughts From a Wild Masters”