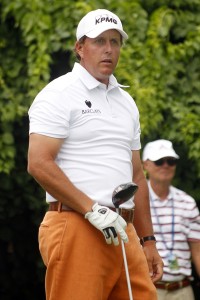 Rees Jones used to be so great at redesigning courses that you had to hire him if you wanted to get a major championship. Now apparently he doesn’t know what he’s doing and his redesign of Cog Hill has been so criticized that it appears it will cause the course to lose the BMW Championship.

And yet, he’s still the same Rees Jones.

It’s not that Jones has changed his philosophy since his successful days to do something drastically different at Cog Hill or Atlanta Athletic Club, also a magnet for criticism when it hosted the PGA Championship last month. Maybe he’s employing a few more tricks in an effort to challenge the pros and combat equipment advances, but his redesigns all fit on a continuum.

The reaction to Jones is basically a bandwagon effect, one he has seen from both sides. Early on, his redesigns, starting with The Country Club for the 1988 U.S. Open, received much praise. The praise led to more redesign work at major-worthy courses, those courses hosted majors, and before you knew it, Jones was the go-to guy.

In truth, Jones probably wasn’t that much better than other architects at preparing courses for majors, though he certainly did display the right touch as he was able to strengthen courses for championships while retaining their character. But the architecture business is one where name and reputation mean a lot, whether it’s new courses trying to promote themselves or established ones trying to land majors. Jones was in the right place at the right time to build a reputation, and he took advantage of it.

But once in the spotlight, you become fair game for criticism, and the brighter the spotlight the greater the glare. It’s probably no surprise that a man who prepares U.S. Open courses would get some criticism from players, who often go on record against U.S. Open excesses. At some point in the last couple of years, that criticism reached critical mass.

There is often a herd mentality among PGA Tour players. Once a few players air an opinion on an issue, it seems that all of a sudden everyone on Tour feels the same way. And so now it’s open season on Rees Jones.

Jones also takes some hits from the golf architecture buffs who populate the message boards on www.geoffshackelford.com and www.golfclubatlas.com, where many consider his work to be unimaginative. He does have some defenders these days, and he had some critics even when he was on a roll, but overall the tide has definitely shifted.

Among the players, Phil Mickelson’s criticism has been over the top. He said last week that Cog Hill should be redesigned again by an architect who “really knows what they’re doing.”

Given Jones’ track record over the past three decades, I think it’s safe to say he knows what he’s doing, even if you don’t agree with what he does.

Mickelson also piled on in his comments about Atlanta Athletic Club at the PGA Championship, with pointed barbs that make it seem like he has a vendetta against Jones. The speculation is that it arises from Mickelson’s dislike of Jones’ redesign of Torrey Pines, where Mickelson won three times before the change but not since. But it’s coming off as petty and personal.

At both Atlanta and Cog Hill, Mickelson said that his concern wasn’t for himself or his fellow pros but that the course was too tough for the average player. Why all this new-found concern for the average Joe? Architects have been building courses too tough for the average player for about three decades, and Mickelson is just starting to complain about it now? In fact, Mickelson himself designed a course in Arizona, Whisper Rock, that needed to be tweaked to make it more playable. I think the “average guy” comment is Mickelson’s way of trying to look not too much like a complainer—hey, I’m not complaining for me (which he really is) but for you average players out there.

It should be pointed out that the high handicapper has three other courses to choose from at Cog Hill. The No. 4 course was specifically designed for the low-to-mid-handicapper—and has carried the nickname Dubsdread since its opening in the 1960s.

The comments that probably stung the most came not from Mickelson but from Steve Stricker, who said that Cog Hill “should probably get their money back” for the redesign. That Stricker, probably the nicest guy on Tour, would make that statement indicates the depth of feeling among the pros about the redesign (other nice guys like Zach Johnson, Stewart Cink, and Geoff Ogilvy took their shots, too). And it’s a sad situation, considering that Cog Hill owner Frank Jemsek is himself one of the nicest guys in golf.

I haven’t played the redesigned course, nor been on site at the BMW, so I can’t really weigh in on the redesign. But the reaction does seem extreme for the changes that were made: rebuilt greens with more segmenting to make long putts harder and tongues for difficult hole locations, deeper greenside bunkers, more and deeper fairway bunkers, one new water hazard, and the green moved closer to water on the 18th.

Whatever one thinks of the quality of the work, there’s no question it turned out to be an unfortunate business decision by the Jemsek family, who were seeking to fulfill Frank’s late father Joe’s goal of having Cog Hill host a U.S. Open. Really, it was more a case of bad timing than misguided thinking.

The U.S. Open goal seemed realistic in that the USGA was starting to go to public courses like Bethpage Black and Torrey Pines, and also was looking for a different Chicago site with Medinah and Olympia Fields no longer in favor. But Cog Hill was a good-but-not-great course that was passed over when it bid for the Open, so it looked like a redesign was the way to go.

At the time (2006), it looked like Jones was the safe choice. His redesign of Torrey Pines, a nothing-all-that-special course of about the same vintage of Cog Hill, had done the trick. Unfortunately for Jemsek and Cog Hill, they didn’t know that Jones was on the verge of going out of style.

That’s not necessarily the reason Cog Hill hasn’t been awarded the Open. Jones is still well regarded by the USGA, but the organization wasn’t thrilled with their experience with Chicago government officials for the 2002 Open at Olympia Fields and they found what they feel is a great site not too far away in Wisconsin, Erin Hills, which was awarded the 2017 championship.

But the redesign not only cost the Jemseks $5 million, with no U.S. Open return, it ultimately is costing them the BMW Championship, which Cog Hill has hosted since 1991 (though less than annually since becoming a FedExCup playoff event). Nor can this publicity be good for business.

It can’t be good for Jones’ business, either. Making players unhappy doesn’t disqualify you from redesigning courses for majors—it might even be seen as a qualification—but still there is a feeling that maybe Jones’ 24-year run as primary Open doctor has passed. First praised, then panned, Jones undoubtedly knows that it all comes with the territory.