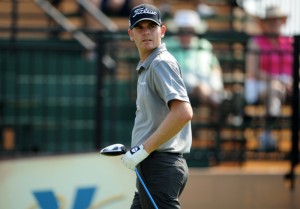 OK, so it wasn’t exactly riveting television watching Brendan Steele beat out fellow rookie Kevin Chappell by grinding out pars on the last 12 holes at the Valero Texas Open. It was close enough to keep you tuned in (assuming you’re the type who will watch when no big names are involved), but there just wasn’t much happening.

The two remained tied as they made nothing but pars from the 11th through the 16th before Chappell finally flinched with a bogey on 17. Steele provided some tension at the finish by missing the green with a wedge on the par-five 18th and then holing a 6-foot, 7-inch par putt for the victory.

But while we always focus on the back nine on Sunday, the journey to a PGA Tour victory encompasses 72 holes. If you followed Steele every hole of the tournament (of course, why would you unless you were immediate family), you would have seen some fireworks. It’s hard to win on the Tour without doing some special stuff.

In the first round, for example, he holed a 26-foot birdie putt on his fourth hole and later sank two shots of about 25 feet from the fringe for birdies on the way to a 69. One of them came on his last hole of the day, the ninth hole at TPC San Antonio’s AT&T Oaks Course, meaning he beat Kevin Na by 13 strokes on that hole. More importantly, those hole-outs saved some strokes that were certainly nice to have in hand on Sunday afternoon.

On Friday, Steele moved up the leaderboard by fighting through strong winds to shoot a 72. A key was the sixth hole where he salvaged a one-putt bogey despite an unplayable-ball penalty after a wayward tee shot. But he did squander strokes with his worst moment of the tournament, a three-putt from six feet on the 15th hole for a double bogey.

It was on Saturday afternoon that Steele made the burst that ultimately won him the tournament, playing the back nine in 31, taking only nine putts. While he made five birdies, just as important was a par on the 12th hole where he holed out from the fringe for the third time on the week, making a 33-foot shot after blasting a greenside bunker shot to the opposite fringe. That came in the midst of a four-hole stretch where he made putts of between 10 and 15 feet for birdies on the other three holes. Birdies on 17 and 18 gave him a 68 and a one-stroke lead heading into the final round.

The 28-year-old Steele led the 2010 Nationwide Tour Championship by five strokes through 54 holes, and he found that tougher to sleep on than his narrower margin at the Texas Open.

“You don’t want to be known as the guy who blew a five-shot lead,” said Steele, who did hold onto to win that season-ending Nationwide event and earn a PGA Tour card for 2011. “When you’ve got a one-shot lead, it’s not even your tournament. There’s so many guys that could still win with a good round. I was a lot more calm today.”

Steele won it with his short game, getting up and down four times for pars on the final nine on a day when the winds picked up again and made low scoring difficult. He didn’t miss a putt inside 12 feet in the final round.

Will we ever hear from him again? We can’t say for sure. He might just be a guy who got hot enough to beat out a relatively weak field in the week after the Masters and drifts back into the shadows.

He’s got one thing in his favor, though—he’s a very good driver of the golf ball, a rare player who is both longer and straighter than average (doing it with a strong grip and somewhat quirky swing). He ranked second in total driving (combined distance and accuracy) on the Nationwide Tour in 2010, and against the tougher competition of the PGA Tour he is still a very good 25th this year.

No matter what happens, he’ll always remember the 2011 Valero Texas Open—even if most of us will have forgotten it by next week.