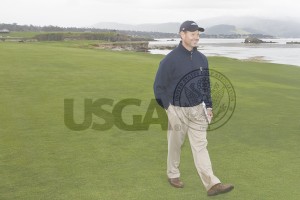 Mike Davis steps into a new role at the USGA. Credit John Mummert/USGA.

When I heard through the grapevine that the USGA was considering Mike Davis for its vacant executive director position, I thought they would be making a mistake by picking him. Not because he wouldn’t be able to handle it, but because he was doing such a great job as senior director of Rules and Competitions that I didn’t want to see him leave that post.

Now that the USGA has selected Davis to succeed David Fay as executive director, I’ve come around to thinking it was a good move. Wisely, they have restructured the position to keep Davis in charge of course setup for the U.S. Open, where he has won raves since taking over that role five years ago.

“We would be idiots if we extracted Mike from U.S. Open activities,” USGA president Jim Hyler said in making the announcement. “Mike will continue to be involved with the U.S. Open from a site selection standpoint as well as golf course setup. He’s the best in the world at that.”

Davis has some other attributes that will help him, too. He’s passionately committed to the USGA and its core missions. He has experience as an administrator from his previous role, where he managed the Rules and Competition staff. Perhaps best of all, he will be a great public face for the USGA.

In addition to being a course setup guru, Davis excels at public relations. He’s such a good interview that he was quoted frequently in stories about the U.S. Open and the reportage on him was nearly always positive—not an easy feat for a man who sets up Open courses, a subject that always has the potential for controversy because the championship always treads the line between difficulty and unfairness. He has even earned universal praise from the players for his setups. The positivity is mostly because he really has done a bang-up job, but also at least a little bit because he’s such a gregarious, nice guy that you don’t want to write anything bad about him or about anything he does.

Davis never turns down an interview, even though his full-to-bursting schedule must make it difficult to fit in all the requests. He doesn’t do it because he enjoys seeing his name in print or his face on the screen. He does it because he loves talking about golf and course setup, and also because he’s considerate enough that he doesn’t want to let down the requester.

He’s also forthright and unguarded in interviews. That’s rare in somebody running a large organization; usually men in such positions are very careful about what they say. But in his openness, Davis is much like his predecessor, Fay, who didn’t play things close to the vest.

I remember interviewing Fay once about future U.S. Open sites, and he talked so openly and positively about what seemed an unlikely possibility of going to California courses Pebble Beach, Riviera, and Olympic in consecutive years that I almost felt he was telling me between the lines that it was going to happen. But Fay wasn’t a read-between-the-lines guy, he was just telling me in his unguarded way that the trifecta couldn’t be ruled out. (As it turned out, the USGA passed on Riviera but went to Pebble Beach in 2010 with Olympic scheduled for 2012.)

Fay was also a rare executive who often answered his own telephone (imagine calling Tim Finchem or Roger Goodell and having them pick up the phone). While I don’t expect Davis to do that, it wouldn’t be out of character.

Fay was always a welcome presence on U.S. Open telecasts, where he explained Rules situations and was brought in for an occasional comment. NBC would be wise to do the same with Davis.

Davis also harkens back to seminal USGA executive director Joe Dey in combining the course setup and executive roles. Dey not only ran the USGA as executive director from 1934 to 1969, he was hands-on in running the U.S. Open. In fact, he acted as a Rules official during the championship and was involved in a number of well-known rulings. Dey was the first-tee starter when he disqualified Porky Oliver and five others for starting too early in the fourth round in 1941 (the players teed off early to avoid a storm while Dey was taking a lunch break in the middle of a 36-hole final day. The DQ ruling cost Oliver a spot in a playoff as the players finished their rounds before the final verdict).

Davis won’t be that involved with the Open. He will oversee course setup before and during the Open, but will relinquish his duties in the actual conduct of the championship such as making rulings and deciding when play will be suspended. And he’s giving up the setup role at the USGA’s other championships.

That’s because the USGA has grown by leaps and bounds since Dey’s day and there is much more involved with the executive director position. (Of course, Davis also has a much bigger staff to help him deal with things; Dey was practically a one-man band in his early days on the job.)

The challenge for Davis will be getting up to speed on other aspects besides competitions, Rules, and closely related operations like agronomy. Most important are equipment regulation and the business side.

When Dey’s tenure ended, he was replaced by P.J. Boatwright, his right-hand man on U.S. Open setup. But the USGA was expanding in the 1970s, and Boatwright wasn’t comfortable running the entire organization. He ended up relinquishing his executive director role in 1980 while staying with the USGA to direct Rules and Competitions.

Davis freely admitted on Wednesday that he has a lot to learn on the business and finance side, and that he will rely heavily on others in those areas. That apparently suited the search committee fine.

The USGA created the position of chief business officer in 2007, hiring Peter Bevacqua to fill the role of supervising business matters. One also has to consider the odd structure of the USGA, which is actually run by volunteer presidents who serve two-year terms and by a volunteer board of directors. In fact, volunteers are heavily involved in all aspects of the operation—even in conducting the U.S. Open where Davis has shared power with the chairman of the championship committee, another revolving-door position.

Fay’s power seemed to wane in the last few years as USGA presidents exerted their influence and Bevacqua came on board at headquarters. But perhaps it wasn’t Fay’s power so much as his enthusiasm that was eroding as he neared the end of his 21 years at the executive position.

That won’t be the case with Davis, whose enthusiasm is palpable. The USGA will be well served by having him as the head of the organization.