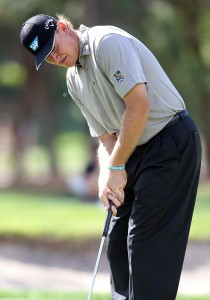 Putting woes have kept Ernie Els from making the field at the Masters, which hasn't offered a special invitation. Photo copyright Icon SMI.

Neither of the South Africans, born eight months apart 43 years ago, was able to do it for reasons that were agonizing in different ways. Goosen entered the round with a share of the lead but, playing with a bad back that affected his swing, hit his drive way to the right on the first hole and made a double bogey. He was four-over through five holes and out of contention by the time they reached the back nine.

Els started three strokes behind, but was in the lead coming down the stretch after playing the first 12 holes in 6-under. Then he bogeyed the 17th and missed a four-foot par putt on 18 to finish one shot out of a four-way playoff.

Not only did they fail to win, they didn’t make any headway in the other way to still make the Masters—earn a place in the top 50 in the world ranking through this week’s Arnold Palmer Invitational. Goosen entered the Transitions 52nd. He’s not playing at Bay Hill this week because of his back, but a finish in the top 10 at the Transitions (except a huge tie near the bottom of the top 10) would have earned him enough points to lock up a Masters spot. Alas, his final-round 75 left him in a tie for 20th and he slipped to 53rd on the world ranking. No Masters for the Goose.

Els entered in 68th place on the ranking. While coming very close to winning on Sunday, he ended up in a four-way tie for fifth in the tightly bunched group at the top of the field and only moved up to 62nd. Only a win would have gotten him into the top 50 at the Transitions, but if he had made the playoff and lost he would have moved to 55th with a better chance to claw his way into the Masters field at the Arnold Palmer.

Should Els even have to claw his way into the field? The Masters rules allow the tournament to invite a foreign player who didn’t otherwise qualify. So why not give one to Els in recognition of his overall achievements—three majors, two runner-ups in the Masters, 18 PGA Tour wins, and Hall of Fame status? (Goosen, incidentally, matches Els with two U.S. Opens and two Masters runner-ups but doesn’t have a third major and has only seven PGA Tour wins, so he doesn’t have as strong a case.)

The Masters has been giving out foreign exemptions sparingly in recent years. There are good reasons for this. The special exemption started out decades ago when there was no world ranking and only a handful of foreigners played the PGA Tour. Since most of the qualification categories were geared toward the PGA Tour, the special exemption category gave the tournament the discretion to ensure that the best international players were able to tee it up at Augusta when they wouldn’t otherwise qualify.

Now everybody around the world has an equal chance to make the top 50 in the world ranking, and thereby qualify for the Masters. And many international players compete on the Tour on a regular or semi-regular basis, so they can get in by winning on the PGA Tour or by their top-30 ranking on the money list or in the FedExCup. It’s still not quite a level playing field for international players who aren’t PGA Tour members, and that, I suppose, is why the special invitation rule remains on the books.

That explains why non-PGA Tour member Ryo Ishikawa received a special invitation two weeks ago when he was 52nd in the world ranking (he’s now 50th). Well, that and the fact that he’s huge in Japan and pumps up the television ratings in that country.

As a player who plies his trade mostly on the PGA Tour, Els has every chance to make the Masters through the normal categories. In that sense, he doesn’t deserve special treatment. Then again, he’s Ernie Els, and maybe that counts for something. The USGA sometimes gives special U.S. Open exemptions to great players in their 40s who just missed out by the regular criteria (Vijay Singh, for example). Maybe the Masters should consider doing the same thing. But if they give that kind of special invitation, it shouldn’t be limited to non-Americans. There’s no reason a U.S. player shouldn’t get the same consideration.

So, I would be OK with inviting Els, but only if the special invitations were opened up to Americans.

There’s one other issue that might be staying Augusta’s hand regarding Els. The field has been getting larger than Masters officials would really like, and that makes them averse to adding to it. The field has crept up well into the 90s with the return of the popular automatic invitation for PGA Tour winners, the addition of the top 30 in the FedExCup to the top players on the money list (even with the money list standard cut from 40 to 30), and inviting the top 50 in the world ranking at the end of December and also two weeks before the tournament. There are currently 95 players in the field (not counting past Masters champions unlikely to play), with two more likely to be added via the world ranking and maybe another one or two by winning the Arnold Palmer or the Shell Houston Open.

As it is, Els will be absent from Augusta for the first time since 1993, barring a strong showing at Bay Hill (a runner-up finish would probably get him into the top 50 on the world ranking) or a last-minute special invitation. If he misses, it won’t be just because of the Masters committee—Els’s putter must take the brunt of the blame.

It’s not just the misses from 4 feet, 6 inches for birdie on the 16th hole and 4 feet, 2 inches for par on the 18th on Sunday, though those were the most costly. His body of work has been exceedingly poor on the greens since 2011. He ranked 181st on Tour in putting last year, losing .699 strokes per round on the greens, and is 157th this year at -.476. His only year of better than Tour average putting since 2005 was in 2010, not coincidentally his best season in that span. At the Transitions, he was mediocre at -.059, meaning he putted at virtually the Tour average from the distances he putted from.