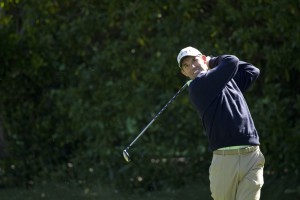 We knew that the European Tour’s Abu Dhabi HSBC Championship was going to be the competitive epicenter of the golf world this week, as it features most of the world’s top players. Turns out it’s producing more news, too.

The latest is that Padraig Harrington was disqualified on Friday for signing an incorrect first-round scorecard. Harrington, who shot a 65 in the first round to trail by one stroke, inadvertently moved his ball while replacing it on the seventh green. That was OK; the problem was that he didn’t put it back in its original spot. The infraction could be—and was—spotted on television. A viewer informed the European Tour by email, but too late for a two-stroke penalty to be applied before Harrington signed his scorecard.

Hmm…where have we heard this before? Oh, yes, just two weeks ago when Camilo Villegas was disqualified from the PGA Tour’s Hyundai Tournament of Champions for an incorrect scorecard after inadvertently violating a different rule.

I understand the importance of the rule about replacing the ball in the same place after it is marked and that players may end up being penalized for infractions that really didn’t help their play. And I’m fine with officials investigating possible violations reported by television viewers.

That still leaves plenty to be bothered about. First, the European Tour—like the PGA Tour—should have a Rules official monitoring the telecast. This is especially important because of the DQ-for-an-incorrect-scorecard rule. With so many hours of golf being televised now, there is just too much chance of a player inadvertently committing a violation that doesn’t really gain him an advantage—and getting DQ’d for it. It’s now happened twice in the last three weeks. Monitoring telecasts might cost a player strokes here or there, but it would save the draconian punishment of disqualification.

(A couple of parenthetical remarks here: Former USGA executive director Frank Hannigan pointed out in a Golf World column that the PGA Tour did briefly institute monitoring in 1991 only to stop it when players complained after an official saw Tom Kite dropping in the wrong place after hitting into a water hazard and took action to correct the mistake. The players complained because it made Kite look bad, and the monitoring was stopped. I was watching that broadcast and I remember it well: I’m not impugning Kite’s integrity in any way but that drop was way off, and officials were right to step in.

Now, for you television viewers who are inclined to report a rules infraction for a violation that was clearly inadvertent and didn’t even help the player: If you can reach officials at the site in time so that the situation can be reviewed before the player signs his scorecard, go ahead. But if it’s too late for that, DON’T CALL!!! And don’t email or tweet about it, because officials might not get word in time.)

As for that disqualification rule, the Harrington incident provides more ammunition for changing it so that if a violation is discovered after the scorecard is signed but before the end of the tournament, the penalty strokes could be added when the penalty comes to light (this would cover only instances where the player did not know he had incurred a penalty). A further provision that I endorse is that an additional two strokes would be added for signing the incorrect scorecard.

European Tour official Andy McFee, who had the unfortunate responsibility of disqualifying Harrington, was quoted as saying that the European Tour had suggested to the rules-making R&A that such a change be made, but it had fallen on deaf ears. Mike Davis of the USGA, which shares rules-making responsibilities with the R&A, has said that this change has been discussed, and rejected, in the past. That doesn’t mean it shouldn’t be discussed again—and it probably will be.

There is a technology issue here, too. Golf telecasts now often feature extreme close-ups of the ball, and are viewed on high-definition televisions. When the incident occurred, Harrington saw some movement of the ball when he touched it but thought it oscillated and returned to its original position. But what Harrington could not detect with the naked eye, a slow-motion replay could. As he put it afterwards, when he saw it in slow motion he could see that the ball moved “three dimples forward and it’s come back maybe a dimple and a half.”

Whoa. If the naked eye couldn’t determine in real time if the ball moved, should it even be a penalty? Is this even an appropriate use of television replay in golf? What if there is a close-up of a ball being addressed by a player, and watching it in slow motion you can see that it moves a millimeter? What if in super-slow motion you can see on a pitch shot from the rough that the ball left the club for a tiny fraction of a second and then the club hit it again—a double hit that could never be detected by the naked eye?

When the rules were written, this technology didn’t exist. Was it really the rulesmakers intent to have a player penalized for movement of the ball that is so slight it can’t even be seen by the naked eye?

Unfortunately, this is not an easy problem to solve. The rules state that a ball is deemed to have moved if it leaves its position and comes to rest in any other place. Technically, a ball that has moved a millimeter really has moved. Rules need to be precise, and it’s hard to come up with appropriate wording that would allow the ball to move a minuscule amount without penalty. But perhaps this could be addressed not in the rules, but in the decisions on the rules by writing a decision on the appropriate use of replay.

The argument about it being unfair to be penalized for an incident that wouldn’t have drawn a penalty if it wasn’t on television doesn’t hold up in a case like Villegas, who tapped down a divot as his ball was rolling back toward him. That’s something that could have been spotted by a spectator or a fellow competitor. But Harrington’s infraction could only truly be detected in slow motion. I think that’s cutting things too fine. And then using the hammer of disqualification on top of that just adds insult to injury.

Frankly, this makes golf look silly to non-golfers. A bigger problem is that it looks silly to a lot of golfers, too.

UPDATE: I hadn’t watched this on YouTube when I wrote; I was basing it on Harrington’s quotes. Now that I have seen it, I do have to say it’s clear that the ball moved, you don’t have to watch it in slow motion to see that. Still, it’s understandable how Harrington would have thought that it just oscillated. Anyway, what was he supposed to do? He could have asked his fellow competitors if they noticed it (they probably didn’t). He could have called in a Rules official and explained the situation, but since he didn’t think it moved he would have been told to leave it where it is. Essentially, he made a “judgment call” and was proven wrong. He wasn’t cheating (there did not appear to be any blemish on the green, and the forward movement was not enough to help him) and he wasn’t ignorant of the Rule. Yet the DQ rule still got him.

The other news out of Abu Dhabi was world No. 1 Lee Westwood saying early in the week that he plans to skip the Players Championship in May. This was a blow to the PGA Tour, which likes to think of the Players as the fifth major. If top players elect to skip it, it’s not a major—even a fifth one.

This was a risk that the Tour took when it moved the Players from late March to May. On the one hand, being played two weeks before the Masters meant that the Players was overshadowed. But there was a benefit to that spot on the schedule—it gave the best players in the world a reason to show up. The Tour might not have appreciated being viewed as a Masters warm-up, but it did ensure a Players field worthy of the fifth major tag.

But a May date is more problematical for top European players who are not members of the PGA Tour. They’ve traveled to the U.S. in March-April, and they have the U.S. Open trip ahead in June. Now, with the Players in May, they have to make an extra trans-Atlantic trip. Or not. There’s no guarantee that the Players is important enough for all of them to do that every year. And if they don’t, the Players loses prestige. Just the opposite of what the Tour planned when it moved away from the Masters.