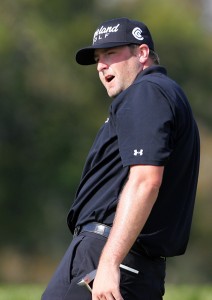 There have been 14 PGA Tour events so far this year. None has been won by a player who came into the year with more than five career wins.

No Tiger Woods or Phil Mickelson—the first time since 1992 that neither of them has won a tournament before the Masters (unless Mickelson wins in Houston this week). Not even a Jim Furyk, Steve Stricker, or Stuart Appleby.

In fact, only three of this year’s PGA Tour winners had more than two career wins. One of them comes with an asterisk: Michael Bradley, with three previous wins, won in obscurity at the Puerto Rico Open held the same week at the WGC-Cadillac Championship, and one of his prior wins also came in Puerto Rico. Rory Sabbatini was the biggest winner with five career wins and Jonathan Byrd had four.

It hasn’t exactly been a changing of the guard, because we don’t know yet who is in the new guard. It’s more like anarchy.

We’ll have to await further developments to see who—if anybody—takes control of the PGA Tour. Meanwhile, the last couple of weeks have provided plenty of action and suspense, even with the absence of stars on top of the leaderboard. There’s a different kind of intensity watching players try to win for the first time—lots of nervous tension in the air.

Last week, it was Gary Woodland and Webb Simpson at the Transitions. This week at the Arnold Palmer Invitational it was one-time winner Martin Laird battling with non-winners Spencer Levin and Steve Marino. It wasn’t exactly pretty as they battled a Bay Hill course with firmed-up greens, tough pin positions, and enough wind to make players think (though not by any means a gale). But it was interesting, with enough good moments sprinkled in among the bogeys to make it not a complete bloodbath.

Laird played the first 11 holes in 5-over to go from two ahead to three behind, but birdied 15 and 16 for a one-stroke win. He was able to come out on top because Marino bogeyed 15 and double bogeyed 17 before rallying with a birdie on 18 that kept him alive but left him one back when Laird parred the difficult closing two holes. Levin, in second place entering the day, shot a horrid 41 on the front nine, but recovered with a 35 on the back that got him back to the brink of contention.

Marino was the day’s tragic figure as he had balls bury in greenside bunkers on the 15th and 17th, though ultimately it was taking three putts from the fringe on the 17th that cost him a shot at a playoff. It was the third time this year that the 31-year-old had a chance to join the party by scoring his first victory. At the Sony Open in Hawaii he was in second place entering the final round and waited too late to make his move, three birdies in the last four holes leaving him one behind Wilson. At Pebble Beach, he led entering the final round but shot a 74 and succumbed to the charge of fellow non-winner D.A. Points. Marino would have three second-place finishes in 2011 instead of two, but in trying to hole his approach shot on the 72nd hole at Pebble for the eagle he needed to tie he pulled it onto the beach left of the green and made a triple bogey to fall to T4.

It’s undoubtedly little consolation to Marino that he now has to be considered one of the best players on the PGA Tour without a victory. That’s not exactly a badge of honor, but as long as we’re basing it on current form instead of career futility (i.e., Briny Baird, the leading career money winner without a win in a career that dates back to 1999) it’s not completely a bad thing. It means these players are due.

Marino isn’t quite first on the list. That spot belongs to Rickie Fowler. Though he is only 22 years old, Fowler earns the top non-winner spot because he is ranked 31st in the world and made the Ryder Cup team as a rookie last year. Fowler, by the way, was just five shots back through 54 holes at Bay Hill but shot a 78 in the final round. (Note: I’m not including Robert Karlsson and Charl Schwartzel, established players with European Tour wins who just joined the PGA Tour this year).

Marino’s fourth career runner-up finish in four-plus years on Tour and rise to 54th in the rankings makes him the next most likely player to crash the winner’s circle. He’s narrowly ahead of Jeff Overton, who joined Fowler on the Ryder Cup team last year. Overton is in his sixth year on Tour, also with four runner-ups but with most of his success packed into one season, 2010.

After that it’s hard to pick from among a group of players including Brian Davis, Kevin Na, Ricky Barnes, and Jason Dufner, with Levin and Marc Leishman perhaps moving into that crowd. Simpson and Brendon de Jonge are just behind, with Bryce Molder, Fredrick Jacobson, and Alex Cejka hanging in there among the veterans.

Of course, who would have put Jhonnatan Vegas, D.A. Points, and Gary Woodland on the list at the beginning of the year—and they are the only three players to score their first wins in 2011.

You’ve got to figure that Fowler will win sooner rather than later (right?) Overton will be interesting to watch to see if he can build on 2010 or not. As for Marino, I’ll be rooting for him to break through. My doubts on it happening soon relate not so much to his ability to withstand the pressure, but to whether he’s close to using up his allotment of chances this year.