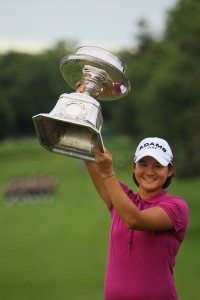 Yani Tseng has won five majors at the age of 22, which is a wonderful accomplishment. It’s the youngest age at which any player, man or woman, has won five majors. But let’s hold off on the comparisons, because most of them are not very relevant.

Let’s especially hold off on comparing her accomplishments to the men. History tells us that it is easier to dominate the LPGA Tour than it is the PGA Tour, and in terms of age we know that women athletes generally peak earlier than men.

If there is a good comparison to be made with Tiger Woods, maybe it’s better to look at the number of years on Tour rather than age. Tseng has won five majors in her first four seasons—the same number that Woods won. True, the younger age at which Tseng started gives her a leg up.

But very often those who start the youngest exit their primes the soonest. And, in any case, it’s still very early. Career performances are not like lines plotted on a graph. Past performance is not always an indication of future results. Remember the predictions from just a few years ago that Woods would break Jack Nicklaus’ major record by 2011 or 2012?

Now we are already hearing about Tseng chasing Patty Berg’s LPGA record of 15 majors. But, even if she eventually gets close, this is not the same thing as Woods chasing Nicklaus. Berg’s record of 15 is historical revisionism—or, really, at its heart, historical guesswork.

There was no such thing as official LPGA major championships until around 1980 when the LPGA decided it would be nice to have them. The U.S. Women’s Open and LPGA Championship were obviously majors, and the LPGA decided to add, dubiously, the Peter Jackson Classic and, rightfully, the Nabisco Dinah Shore. (The Peter Jackson became the du Maurier Classic, which became defunct, which was replaced as a major by, rightfully, the Women’s British Open.)

At the same time, the LPGA decided to go back into the past to create a history of major championships. It was recalled that the Women’s Western Open and the Titleholders Championship used to be big tournaments in their day. So, hey, let’s make them retroactive major championships.

Unfortunately, both tournaments ended after 1966, except for a one-year reprise of the Titleholders in 1972. And here’s the first element that makes historical comparisons of official LPGA major championships dubious. From 1967 to 1982, there 11 years with only two majors and five years with three (the Nabisco Dinah Shore wasn’t added until 1983, though it should have been earlier. Neither it nor the Peter Jackson were made retroactive majors back to their founding in the 1970s).

So, any accounting of career majors is inherently unfair to players of that era. That includes Kathy Whitworth, the winningest player of all time, though her failure to capture the U.S. Women’s Open would have hurt her total even if she had been able to play the full complement of majors. Also affected are Sandra Haynie, Judy Rankin, Donna Caponi, the early years of Pat Bradley, Nancy Lopez, and Amy Alcott, and the later years of Mickey Wright.

The earliest era is even trickier. The LPGA was founded in 1950. Understandably, in counting majors the LPGA credits the U.S. Women’s Open back to its founding in 1946. They also count the Women’s Western and Titleholders back to their founding in 1930 and 1937, respectively.

It could be argued that pre-1945 players are historically handicapped because they played in only two events per year that are now considered majors by the LPGA. But there were only a handful of pros in those days—I don’t mean a handful of top pros, I mean a handful of pros, period. There was no women’s Tour and those 1930s events were won mostly by amateurs.

Berg won five majors before 1946, three from 1946-49, and seven from 1950 on. That’s like a collection of five oranges, three pears, and seven apples, but they are all counted the same in the LPGA record book. The official list of major winners shows the advantage of the early players: Berg 15, Mickey Wright 13, Louis Suggs 11, Babe Zaharias 10, Annika Sorenstam 10, Betsy Rawls 8. Only Sorenstam started her career after the 1950s.

Granted, Berg (born in 1918) was handicapped by the fact that the LPGA Championship didn’t start until 1955. She didn’t win that event, and 14 of her majors are accounted for by seven wins each in the Western and Titleholders. Berg is a sweet lady and was a great player, along with being a pioneer. It’s always difficult to compare players from historical eras, but for women players who came along in the 1930s and 1940s it’s basically impossible.

Berg was certainly a player of historical importance, but she is not the LPGA’s Jack Nicklaus. That would be Wright, with 13 majors, or Sorenstam with 10. (Whitworth is the LPGA’s Sam Snead, with the most career wins but no U.S. Opens. And some would also give a nod to Zaharias, whose early years were dedicated to track and field in a time when there was no women’s Tour.)

Wright and Sorenstam ended their careers early, Wright mostly inactive after the age of 34 due to foot problems and perhaps a lack of desire and Sorenstam retiring at 38 to start a family at a time when she was still very much a force in the game. They do rank high on the majors list, but their status has as much to do with other accomplishments like stringing together sequences of years with eight victories or more per season—and even simply with the way they struck the ball.

They are the gold standard against which Tseng, or any other woman player that comes along, will be measured. And there will be more than one measuring stick; it won’t be as simple as Tiger Woods chasing the number 18. (Comparisons based on majors will become even less meaningful when the LPGA adds a fifth major with the Evian in 2013.)

But, anyway, it’s way to early to know if Tseng will be part of that conversation. Right now, she’s akin to Se Ri Pak or Karrie Webb. Pak won four majors by age 24; she now has five at age 33. Webb collected six majors by age 27; she now has seven at age 36. Neither suffered any significant injuries or went through any major life changes—they are simply evidence that sustaining excellence over a long period of time is really hard.

And even maintaining excellence doesn’t mean you’re going to win a major or two every year. Tom Watson came into his own as a great player in 1977 when he won two majors. He led the money list in 1978 and 1979, but did not win majors. In 1980, he won a major. But he was the same player all along.

Granted, there’s something to be said for rising to the occasion (or, conversely, shrinking from the occasion for those who don’t win majors). But there’s also an element of happening to play well in the right weeks, and an element of whether somebody else has a hot week to steal what could have been your major or has an epic collapse to hand you a major.

Tseng could play just as well overall the next couple of years, yet not add to her major count. So far she has won a total of nine LPGA tournaments, five of them majors. It’s to her credit that she has been at her best in the biggest events, but that ratio is bound to change.

I’m not meaning to be a party pooper here. Tseng’s five majors, and her feat of winning two majors a year in consecutive years, are cause for celebration and congratulations. But it will take time to see if Tseng is merely the next Se Ri Pak or if she’s the next Annika Sorenstam.