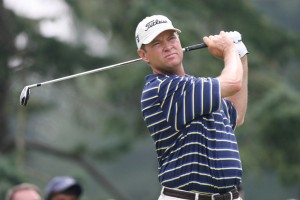 Davis Love III has only one major, but it would be nice if he could count the Players, which he won twice. Photo copyright Icon SMI.

Tim Finchem is jealous. On Wednesday, LPGA Commissioner Mike Whan called a press conference to announce that the Evian Masters would become his Tour’s fifth major.

If only the PGA Tour could do that, the Players Championship would have become a fifth major a long time ago!

Actually, the LPGA is taking its cue from the PGA Tour in its role as overseer of the Champions Tour, which in 2003 designated the Senior British Open as a fifth major for the seniors. But designating majors is the prerogative of lesser Tours. The men’s majors have been set in stone by universal acclimation and can not be changed, or added to, by fiat. The PGA Tour doesn’t even run any of the four majors, let alone have the power to add a new one.

I don’t really have much of a problem with adding a fifth major. The fact that there are four men’s majors are sort of an accident of history.

It started with Bobby Jones and his successful pursuit of the Grand Slam in 1930. Naturally, the four biggest tournaments for an amateur were the U.S. Open, U.S. Amateur, British Open, and British Amateur. But Jones’ effort was really more of a personal quest than a universal pursuit by players of his time to acquire major championships. Even in Jones’ day, he was one of only a handful of amateurs who could compete at the same level as the pros and thus have any thought of winning Opens. And, of course, the pros weren’t eligible for the two amateur championships.

The modern Grand Slam as we know it didn’t solidify until 1960, though the pieces were in place before that. The U.S. Open and PGA Championship were obviously “majors” for American pros, and the Masters took its place alongside them within a few years of its 1934 debut based on press coverage, player sentiment, and the prestige accorded to the winner. While Americans had largely stopped going to the British Open in any numbers, that championship still retained prestige in golf circles, and the top American player was often under pressure from the golf press to go over and play in it.

In 1960, Arnold Palmer won the Masters and U.S. Open, and his chronicler, Pittsburgh sportswriter Bob Drum, cooked up and publicized the idea that Palmer would go for the modern Grand Slam by trying to add the British Open and PGA Championship. (Jones’ version of the Grand Slam became immediately obsolete upon his retirement after the 1930 season.)

Palmer didn’t win the British Open in 1960, but he returned the next year and won it. When the young Jack Nicklaus came along immediately thereafter and also became a regular at the British Open, and other Americans followed suit, the four majors were in place—put there not by any governing body but fully accepted and agreed upon by the players and the golf public.

Nicklaus pounded home the primacy of those four tournaments by focusing so much of his attention on them. And Tiger Woods’ pursuit of Nicklaus’ Holy Grail of 18 majors furthered the process.

For the true greats of the game, it makes sense to use majors as a yardstick over the course of their careers. But for looking at a shorter period of a year or two, or for evaluating players a notch or two below the all-time greats, majors aren’t necessarily the best tool.

True, the majors bring together all of the best players, so if you win a major you have beaten everybody. That’s not true week in and week out on Tour. But there’s also the element of just happening to play well—or not—in the right weeks. In judging results of something as variable as the form of golfers, it’s better to have a large sample size, and four tournaments a year is an awfully small size.

The inadequacy of using majors alone to measure players is shown by the fact that John Daly and Andy North have each won two majors, while Davis Love III has one.

Love is a good example because he won two Players Championships. OK, you may be tired of having the Players pounded down your throat as a fifth major. But it has always attracted all of the world’s top players (a fact which is starting to be in jeopardy), is played on a great course, and is just as hard to win as a major. If we weren’t limited to four majors, Love would get more of his due.

But there are now two problems with using the Players as a fifth major. There’s the fact that the world seems dead set on four men’s majors as an immutable number. (A related issue is that going from four to five messes up historical comparisons.) And there’s also the fact that it’s located in the United States.

When the four majors developed, it made sense that three of them were in the U.S. because Americans were by far the dominant force in golf. That’s no longer the case. The current drought of majors without an American champion (now six) won’t last forever, but in the coming decades there’s little chance they will pile up three or four wins a year in majors. There’s too much international competition out there.

So, even if there were sentiment for a fifth major, it shouldn’t be in the U.S. But what international body would run a fifth major? Perhaps a consortium of the world’s pro Tours could do it. They already run the World Golf Championships, which are a couple of notches below the majors. But, who knows, maybe in a couple of decades the world will see the need for an international major that would rotate to a different part of the world each year, and one of the WGC events could morph into a fifth major.

The LPGA is even more international than the PGA Tour. So it makes sense that in adding a fifth major they are doing so outside the United States—though, considering the balance of power in women’s golf, Asia would make more sense than adding a second major in Europe.

The situation with the Evian is in many ways similar to the start of what was then the Colgate Dinah Shore (now the Kraft Nabisco Championship). In both cases, the LPGA had a sponsor that believed in women’s golf enough to put up prize money that dwarfed other tournaments. So, it makes sense to keep that sponsor happy and also lock them up for a very long-term commitment.

When the Dinah Shore started in 1972, it became the only tournament other than the U.S. Women’s Open to receive network television coverage. By every measure—prize money, television, prestige accorded to the winner—it ranked alongside the Women’s Open as the biggest tournament in the game in the 1970s. It was, essentially, a major in the way it was regarded by the public, the press, and the players.

But it wasn’t quite a major in the same sense as men’s majors. It was hard for some to see a corporately sponsored event (with a celebrity’s name in the title, to boot) in the same light as a major. And you need four parts for a Grand Slam, but there was no viable fourth leg. The Titleholders had once been sort of a women’s equivalent of the Masters, but it ended in the 1960s. So did the Women’s Western Open, a big tournament in its own right though it might have been a stretch as a major.

In 1979, the LPGA, in a period of rapid growth at the time, said if the men have majors, why can’t we? And if the public isn’t determining them, we’ll do it ourselves.

The U.S. Women’s Open and LPGA Championship were obviously majors. For some reason, the LPGA designated the Peter Jackson Classic as its third major and overlooked the tournament that had the feel of a major, the Dinah Shore.

The Peter Jackson (later the du Maurier Classic) was held in Canada, so I suppose it could be said it had the feel of a national open. But it wasn’t called the Canadian Open and it didn’t carry the kind of prestige that cried out for being a major. In the end, it lost its sponsorship after 2000 and was replaced by the Women’s British Open as a more worthy major.

Finally, in 1983, the LPGA belatedly designated the Dinah Shore as a major. But it didn’t retroactively declare previous Dinah Shore winners as major champions, though the tournament’s status had been enhanced by the fact that it had been won by the best players of the time—Mickey Wright (in semi-retirement), Kathy Whitworth, Jane Blalack, Judy Rankin, and Nancy Lopez among them.

This was probably because it hadn’t retroactively declared past Peter Jackson winners as major champions, which would have been silly. But the past Dinah Shore winners actually deserved that retroactive status. When Lopez won the Shore in 1981, she won a tournament that out-stripped that year’s Peter Jackson in prestige, but if you look up her record it will tell you that the only major she won in her career was the LPGA Championship (three times). The LPGA should rectify this oversight and change its records to make the Dinah Shore a major from 1972 to 1982 (but not do the same for the earlier Peter Jackson).

If you’re not stuck on the number four as a matter of principle for majors, the main argument against making the Evian a major is that it throws off historical comparisons. Players of the past didn’t have a chance to play for five majors, but future players will.

But historical comparisons for majors are already a mess for the LPGA. The Titleholders and Women’s Western were retroactively declared majors, so the early players had four chances a year for majors. But in 1968-78 there were only two majors, and in 1967 and 1979-82 there were only three.

Patty Berg leads the LPGA with 15 majors, but with credit for the Titleholders and Women’s Western stretched back to their beginnings in the 1930s that includes eight before the foundation of the LPGA in 1950. And it includes three from the 1930s when there were only a handful of top-class women players. Patty Berg is a great lady and was a great player, but that is like including apples in a count of oranges.

Partly for that reason, but mostly because of the lower profile of women’s golf, Berg’s 15 doesn’t resonate with the public like Nicklaus’ 18. Nor do the historical reputations of Whitworth, Lopez, etc. rest as much on majors as do the greats of men’s golf.

With historical comparisons based on majors less likely to be made in the first place, adding a fifth major isn’t too much of a spoiler.