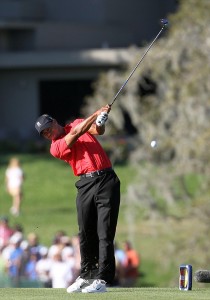 Things are looking up for Tiger Woods coming into Augusta thanks to improved driving. Photo copyright Cliff Welch/Icon SMI.

Tiger Woods may no longer be bothered by “the big miss.” Oh, he’s no doubt still plenty bothered by his former teacher Hank Haney’s book The Big Miss. But he seems to be overcoming the wildness off the tee that the title refers to.

Through the first five tournaments he’s played in this year, Woods ranks 18th on the PGA Tour in hitting fairways. Granted, that’s a small sample size (it’s actually four tournaments, since full stats aren’t kept at the Match Play). He did have some four-tournament stretches like that under Haney from 2004-9, but not many.

So, to be fair, Woods actually was making progress against the “big miss” in his last full year under Haney, 2009, when he ranked 86th in hitting fairways before everything fell apart for a while, starting with a wild drive into a fire hydrant. Overall, though, his average driving accuracy ranking under Haney from 2004-9 was 153rd. Under the tutelage of Butch Harmon from 1997-2003 he averaged 101st.

In a lost, injury-plagued 2011 under Sean Foley, Woods would have ranked 186th if he had played enough rounds to qualify. But a lack of practice time due to Achilles and knee injuries kept him from grooving the swing changes. It looks like he’s got things straightened out now. Not that we can expect Woods to keep up his current pace. It’s virtually impossible for a long hitter to rank near the top in hitting fairways (in 2011, the best driving accuracy ranking among the top 20 in distance was Keegan Bradley at 96th). But as long as he shows significant improvement over recent years in finding fairways, Woods will have a better chance of becoming a big winner again.

Putting is also a key, and there are good signs there, too. Again, it’s early, and there is so much variation from week to week in putting stats that it’s tough to make a big deal out of small sample sizes. But so far in 2011, Woods ranks sixth in strokes gained putting, gaining .727 strokes per round despite his poor showing on Sunday at Pebble Beach.

He has tightened up in scrambling, too. Long renowned as a wizard around the greens, Woods stunningly slipped to 166th and 141st in scrambling the last two years—an overlooked factor in his decline—but is back in the top five where he used to be (fourth, saving par 68.42 percent of the time when he misses the green compared to 54.97 last year).

The lone remaining area where Woods is still struggling so far in 2012 is in his full wedges. He ranks outside the top 100 in both greens in regulation and proximity to the hole in approaches from 75 to 100 and 100 to 125 yards.

That could hurt him at Augusta National’s third hole in the Masters this week, where the tiny plateau green is one of the most difficult targets for a wedge shot in golf. Or if he hits a bad drive and is forced to lay up on a par five. But that could happen less if his driving accuracy holds up, and he might make fewer visits to the trees on the par fours, too.

Woods’s efforts at Augusta since his last victory in 2005 could be titled “the near miss.” He’s had two seconds, a third, two fourths, and two sixths, finishing between two and five strokes behind every year. While Augusta’s tree planting campaign didn’t help him, Woods’s biggest problems have come on the greens, particularly in final rounds—even when, overall, he was still one of the best putters in the game in 2006-9.

As a result, he’s still chasing Jack Nicklaus’s total of six Masters titles, just like he’s chasing Jack’s total of 18 major championships. But if we compare the records of Woods and Nicklaus at the Masters through age 35, they are so similar it’s almost eerie.

That’s identical except one more made cut for Woods and, in the most important category, one more win for Nicklaus. But that difference only came about at age 35 thanks to Jack’s 1975 victory, and he won only one Masters the rest of the way, 11 years later. So there’s still room for Woods to catch Nicklaus.

Speaking of Nicklaus, it will be interesting to see if Woods can trace Jack’s evolution as a driver. Like Woods, Nicklaus overpowered courses—and the opposition—in his younger days. Stats weren’t kept for driving accuracy then, but it’s unlikely Nicklaus was near the top in his early years.

The PGA Tour began keeping stats in various categories of the game in 1980 when Nicklaus was 40 years old. By then he wasn’t the longest hitter, but he was long enough to rank 10th in driving distance (at 269.0 yards, by the way). Whatever power he had lost was more than made up for by a gain in accuracy—Nicklaus ranked 13th that year in hitting fairways. Nicklaus’ combination of rankings of 10th and 13th for a total of 23 in the total driving stat is still by far the best ever in the 32 years stats have been kept.

Woods is no longer in the elite bomber class of Bubba Watson, J.B. Holmes, Alvaro Quiros, Dustin Johnson, Robert Garrigus, et. al. If he’s as wild off the tee as those guys, he’ll be in trouble as he approaches 40. But if he can keep it in the short grass the way he’s done so far this year—and the way Nicklaus did later in his career—he’ll be OK.