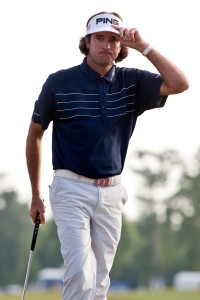 Bubba Watson heads my list of the top U.S. golfers at the moment, but nobody has really taken control. Copyright Icon SMI.

A week ago, Luke Donald moved into the No. 1 position in the official world golf ranking by winning the European Tour’s BMW PGA Championship. At the Memorial Tournament, with less fanfare, Steve Stricker’s victory made him the top-ranked American golfer.

Of course, Stricker needed only to reach No. 4 in the world to earn that distinction, which tells you something about the state of American golf at the moment with Tiger Woods having imploded and Phil Mickelson unable to establish control on a regular basis. There really is no clear-cut top U.S. golfer at the moment.

Stricker entered the Memorial 32nd on the 2011 PGA Tour money list and even after the victory is just ninth. So, his high standing has a lot to do with his performance over the earlier portions of the two-year period that is used for the ranking. I’m OK with that. My view is that you have to prove yourself over a fairly long period to really establish yourself as a top player. If I asked you who is a better player, Mark Wilson or Stricker, you undoubtedly would answer Stricker, even though Wilson has won twice this year and is ahead of Stricker on the money list.

Still, there is enough doubt about who is the best American player right now (actually a better answer might be, “position vacant”) that I thought it would be interesting to use a combination of several measures to try to come up with the best objective answer, based on money earnings, world ranking points, and victories, all over different time spans.

Here are the top 10 U.S. golfers, using those criteria (numbers in parentheses represent player’s ranking among U.S. players in the above categories, in order, with the overall ranking determined by combining all of the categories):

Bubba Watson: Glad to see my system points to the guy I would subjectively pick as the best right now, though it’s a shaky No. 1 because of his lack of consistency. That’s evidenced by his starts in each of his last two tournaments: 76-66 at the Players and 75-69 at the Memorial. Only American with three wins in the last 12 months. Two came in events with weaker-than-average fields, but his Farmers Insurance win was against one of the year’s better fields and he was a runner-up in the PGA Championship.

Steve Stricker: I tend to think of him more for his consistency than as a big winner, but his five wins in the last two years are more than any other U.S. player (and it’s six wins if you extend it back just a couple of weeks). It’s been an impressive career renaissance for the 44-year-old.

Matt Kuchar: Still needs wins to solidify his position among the elite, but his consistency (and the lack of a dominant player) earned him the money title in 2010. He has followed that up nicely with a ranking of sixth so far this year and eight top-10 finishes. But just one win in 2010—at least it was a big one in the playoffs—and none so far this year. Made a strong bid at the Memorial with a final-round 65 for T2.

Nick Watney: Has earned the most world ranking points of any American in 2011 (fourth overall), thanks to a WGC victory and seven top-10s. If he hadn’t melted down as 54-hole leader at last year’s PGA Championship he would rank higher on this list, but he’s showing a lot of game this year.

Phil Mickelson: Disappointing that he hasn’t taken advantage of Woods’ absences and troubles to take his place at the top. Three wins in a two-year span would be good for most, but it’s something of a letdown for Phil, who has been erratic off the tee and on the greens.

Dustin Johnson: As recently as a couple of months ago was in the conversation with the above five players as possibly the top American. Poor putting has hurt him in 2011, but pure talent keeps him in the mix to possibly lead this group over the long haul. Fourth-place finish at the Memorial offers hope going into the three summer majors.

David Toms: Another 44-year-old joins Stricker on the list, thanks to his Colonial victory and Players runner-up. So far in 2011 Toms ranks third on the PGA Tour in hitting fairways, second in hitting greens, and sixth in putting. That will get it done even if you’re a shorter-than-average hitter.

Hunter Mahan: He’s actually been more consistent from week to week in 2011 (seven top-10s) than in 2010 when he won twice. But he needs to be more consistent in his rounds. Mahan is first on Tour in making birdies (4.60 per round), but only 16th in scoring average because of too many bogeys.

Jonathan Byrd: He’s been in three playoffs since last October, with a 2-1 record. Won with an ace in Las Vegas, won again at Kapalua to kick off 2011, and lost at the Wells Fargo.

Mark Wilson: Two wins in a half-season will get you on this list. Based on his record over the years, it’s doubtful that he will stay there but a T7 at the Memorial is a sign he hasn’t disappeared.

Tiger Woods: This is how far Woods has fallen—he’s not even in the conversation as being among the top 10 Americans right now. If it were a matter of only his swing and his psyche it could be argued that a return to something resembling his old form could happen at any time. But his injuries throw a monkey wrench into that argument.

Jim Furyk: Last year’s PGA Tour Player of the Year has been so ineffective in 2011 that he doesn’t even make the list. He’s still eighth in Presidents Cup points thanks to his Tour Championship win last September, keeping alive his hopes of continuing to make every Ryder or Presidents Cup team since 1997.