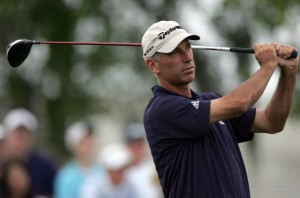 Corey Pavin shot a 69 on Thursday despite giving up 60 yards to some of his competitors off the tee. Copyright Icon SMI.

Corey Pavin has apparently played in his final Northern Trust Open, having said that after 29 starts in the event this would be his last unless he wins. After the first round, that wasn’t entirely out of the realm of possibility. In fact, the 51-year-old Pavin had a chance to take the lead himself as he was 5-under with four holes remaining. Unfortunately, he bogeyed three of those holes for a 2-under 69, two strokes out of a nine-way logjam for the lead. There was little in the way of magic after that, as the 155-pound Californian closed in 71-76-70  to finish tied for 55th.

It would have been a great story if Pavin could have stayed in contention over the weekend. But when you looked at where he was playing his second shots from, that seemed unlikely. A shorter-than-average hitter in his younger days, Pavin is now by far the shortest hitter on the PGA Tour. He averaged 256.7 yards on his tee shots in 2010, which if he had played enough rounds to qualify for the statistical rankings would have been 10 yards shorter than anyone else.

Pavin won the Northern Trust (when it was called the Nissan) in 1994 and 1995, not surprising when you consider that Riviera has always been considered a shotmaker’s course. But he hasn’t even posted a top-10 since then, and with the course extended to 7,325 yards he was working with near zero margin of error.

Let’s compare the distance of Pavin’s second shots on the par-4s in round one to that of J.B. Holmes, one of the longest hitters on the Tour, who was one of the players tied for the lead with a 67. Leaving out the 315-yard 10th hole, here’s what they had for their approach shots:

Here’s how far they had to the green for the second shot on par 5s:

Holmes (who finished in a tie for 12th) was easily able to go for the green with his second shot on all three par 5s; Pavin had no chance to get anywhere close to the green on two of them but was able to go for it on the first hole (his 10th since he started on the back nine). Pavin took advantage of that 503-yard hole with a pitch-in eagle from right of the green after hitting his longest drive of the day from the very elevated tee: 273 yards.

Holmes, by contrast, hit six drives that were 320 yards or longer. For Pavin, it’s like a popgun trying to compete with a cannon. The discrepancy in distance on approach shots listed above would have been even greater except for the four holes where Holmes laid back off the tee—actually a total of five holes since he elected not to go for the green on the 10th, which is drivable but filled with trouble around a green that is a tiny, angled target from the tee.

There were two long par 4s where Pavin left himself longer second shots than the distance of his tee shots, which were poorly struck hooks into the left rough. On the 12th he hit a 231-yard drive and had 250 yards remaining to the hole and on the 2nd his 238-yard drive left him with 241 yards to go. He bogeyed the 12th and made a 21-foot putt to save par on the second.

Pavin took only 15 putts on his first 13 holes, due to good putting, the pitch-in, and the fact that he had only three putts longer than 13 feet: He was either hitting his approaches close for birdies or missing the green and scrambling. Over the course of the last four holes, however, he failed to convert two up-and-downs from greenside rough and three-putted from 89 feet after a 5-wood approach that barely made the green. He finished with just 26 putts, but that was an average putting performance from the distances he putted from.

Pavin played with two young players who were members of the U.S. Ryder Cup team that he captained in Wales last fall and he whipped them both, as Jeff Overton shot a 73 and Rickie Fowler a 74. But Pavin has no illusions of playing the PGA Tour regularly anymore. After sprinkling eight PGA Tour events into his rookie Champions Tour campaign last year, he plans on entering only three tournaments on the big tour in 2011.

He wouldn’t have even played at Riviera except that the Southern California native and UCLA alum was awarded an honorary membership at Bel-Air Country Club in a ceremony earlier in the week. After giving away 30 to 60 yards off the tee to the majority of his competitors on the PGA Tour, Pavin should be glad to return to the Champions Tour. Actually, he’s still 17 yards shorter than average on that tour, but at least the courses aren’t as long.

Holmes makes a 7,300-yard course look small, but he needed to putt better to keep a high position on the leaderboard. He could have held the lead himself after the first round, but he three-putted from 21 feet on the 12th (his third) and missed from 3 feet, 5 inches on the fourth (his 13th).

Here’s how Pavin and Holmes made their way around Riviera on Thursday from the PGA Tour’s ShotLink data (numbers in parentheses indicate yards remaining to the hole).