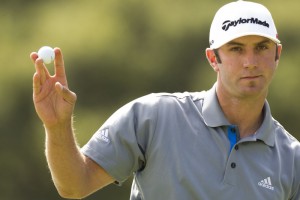 Dustin Johnson has taken a licking but he keeps on ticking. Photo copyright USGA/John Mummert.

Say this about Dustin Johnson: The man is resilient.

Blowing the U.S. Open by shooting an 82 in the final round and the PGA Championship with a Rules violation on the final hole would have been enough to make many players crawl into a hole and not come out until 2011. Instead, he got back into the final pairing of the fourth round at the first FedExCup playoff event, The Barclays—only to shoot a 72 while everyone else was in the 60s, dropping into a tie for ninth.

Three strikes and you’re out? Not for Johnson. He put himself back into the last pairing of the final round yet again at the BMW Championship, and this time he came through with a birdie on the 71st hole for a closing 69 and a one-stroke victory that felt awfully sweet.

Johnson said after the victory that he preferred the word “mishaps” to “failures” for what happened earlier this summer. He also called them “unfortunate situations.”

Mishaps they may have been, especially at the PGA where on the 72nd hole he grounded his club in a bunker that he didn’t know was a bunker. But they were mishaps of truly historic proportions.

At the PGA, he became the first player since Roberto De Vicenzo at the 1968 Masters to lose a major championship in the scoring area after walking off the 72nd green thinking he was in a playoff. At the U.S. Open, his final-round 82 was the worst score for a 54-hole leader in that championship since Fred McLeod shot an 83 all the way back in 1911, blowing past the 81s shot by Retief Goosen in 2005 and Gil Morgan in 1992.

Either loss alone would have been enough to put Johnson in the hall of infamy, but to have both happen within a two-month span was cruel and unusual punishment. It could have potentially crushed the psyche of a more fragile player, but the 26-year-old Johnson is made of sterner stuff.

When he returned to the Tour after the U.S. Open, he said it took him only a day to get over that setback. On Sunday, Johnson said that getting over the PGA “wasn’t very hard at all,” pointing to the fact that he birdied the 16th and 17th holes to take a one-stroke lead as something positive to take out of the experience.

At the BMW, Johnson got an assist from Paul Casey, who bogeyed three straight holes on the back nine. But wouldn’t you say he was due for a break? And Johnson seized the title with a beautiful drive and a sand wedge to tap-in distance for the go-ahead birdie on the 17th hole.

Johnson said he learned a lesson from the Open at Pebble Beach, where he found himself rushing, especially on the third hole where he barely moved two consecutive chip shots and made a triple bogey that wiped out his lead. “Everything starts moving fast in a situation like that, so I really learned to be patient,” he said after the BMW. “I didn’t rush any shots today.”

His lesson from the PGA at Whistling Straits will probably be to read the rules sheet handed out to the players before the tournament. Also the next time he plays in a tournament where bunkers are scattered outside the ropes, to be sure he always checks whether or not he is in a bunker.

Supportive fans have taken to shouting “It wasn’t a bunker!” at Johnson, though I’m not sure it’s really supportive to remind someone of the worst moment of his life.

Johnson earned plenty of fans with his stand-up reaction to the Whistling Straits disaster, where he gave interviews to television and print reporters and accepted the decision with equanimity instead of lashing out at PGA officials. He’s also a fun player to watch because he absolutely crushes the ball off the tee, ranking in a group with Bubba Watson, J.B. Holmes, and Spain’s Alvaro Quiros as the longest hitters in the game.

At age 26, he’s already the most accomplished of that group of bashers. But Johnson’s one fatal tendency is the occasional tee shot that is so wild it is off the charts. There was the one into the jungle on the third hole at Pebble Beach leading to an unplayable lie. There was the one at the fourth hole at Whistling Straits into deep rough next to an adjacent fairway. Those were wild left. He went wide right with a tee shot out of bounds on the 72nd hole of the British Open, costing him a top-10 finish, and with his drastic push that got him in trouble on the 72nd hole at Whistling Straits.

In that regard, Johnson’s finish in the BMW at Cog Hill was very encouraging. On the 17th hole, he set up his birdie with a long, faded drive that cut the dogleg. With a one-stroke lead heading to a very difficult par four 18th hole—the identical situation he faced at Whistling Straits—he found the fairway with a 315-yard bullet and made the necessary par.

With four career victories at the age of 26, Johnson has moved to the head of the class among young players in the game. And he’s turning a summer to forget into a year to remember—especially if he can improve his FedEx standing from second to first at the Tour Championship in two weeks and walk away with the $10 million prize.