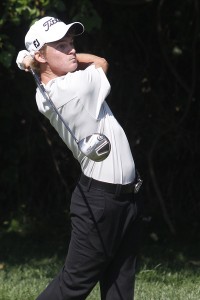 Bud Cauley is on the verge of earning a PGA Tour card without going to Q-School. Photo copyright Icon SMI.

Here’s what we learned about Tiger Woods at the Frys.com Open at CordeValle: very little.

He was rusty in the first round and shot a 73. No surprise there since it had been seven weeks since his last tournament. He rebounded with three rounds of 68 to tie for 30th. No surprise to see flashes of good form for a player who used to be the best in the world. But still not all the way back even with those 3-under 68s in a tournament where the winning score was 17-under.

Alarm bells about Woods’ putting after a first round in which he missed two very short putts and lost 1.26 strokes to the field on the greens proved unfounded as he rebounded to gain a stroke per round on the field over the last three days to finish at a very acceptable +.452 strokes per round for the week. The worst part of his game was driving accuracy. Nothing new there.

Also par for the course: Woods opening the week by saying his measure of success was “getting a W” and ending it sounding satisfied because he’s headed in the right direction. And curtly dismissing the possibility of playing in another Fall Series event, ensuring that he will once again be rusty when he plays in the Australian Open after four weeks off.

While Woods drew the fans and Bryce Molder topped Briny Baird in a tense six-hole playoff between players looking for their first PGA Tour victory, one of the most interesting developments of the week involved Bud Cauley. By finishing in third place, the 21-year-old who bypassed his final college season at Alabama to turn pro this summer moved himself into position to possibly become the first player since Ryan Moore in 2005 to earn a PGA Tour card without going to Q-School.

Cauley played the last four holes in 3-under for a 66 to gain solo third and a check for $340,000. It was a meaningful finish because it vaulted his winnings to $671,150 in the seven events he’s played in, with two top-five and four top-25 finishes. He would rank 114th on the money list if he were eligible to be listed. There are two tournaments remaining and if he finishes the year with more earnings than the 125th man on the list, Cauley would get a Tour card.

He’s out of sponsor exemptions, but his top-10 finish at CordeValle gets him into this week’s McGladrey Classic. Making the cut there should give him sufficient earnings to come away with a card.

He might make it even without any more earnings, but it’s not a lock. Players who don’t earn money in a given tournament at this time of year generally drop anywhere from four to eight places on the money list, so that could leave him in or out. Another way of looking at it is that the winnings of the 125th man on the list moved from $571,000 to $602,392 this past week. If it jumps by about the same amount in the next two weeks, the cut-off would be at about $665,000. That would get Cauley in, but it would depend on the play of others who are currently around the 125 mark or outside it.

It would be better, of course, to wrap it up this week. Failing that, Cauley could try to get into next week’s Disney event through Monday qualifying.

Cauley is built in the mold of Luke Donald at 5-foot-7, 150 pounds. He’s no bomber, but he’s longer than you might expect. In the events he’s played in, he has averaged 32nd in the field in driving distance. But by busting it pretty far for his size, he appears to be losing some accuracy, as he’s averaging 45th in hitting fairways. His strength is hitting greens—he’s been in the top 20 in GIR in five of the six events in which he’s made the cut, and in the top four twice. If you can consistently hit greens on the PGA Tour, you’ll do well, though Cauley’s inability to overpower courses could be a limiting factor.

Cauley is just one of several players turning pro in 2011 who bear watching. Harris English won a Nationwide Tour event as an amateur, and then lost one in a playoff after turning pro last month. Russell Henley also won a Nationwide event as an amateur, and John Peterson has a runner-up Nationwide finish. And coming along right behind them is UCLA sophomore Patrick Cantlay, who resisted the temptation to turn pro after making a splash in PGA Tour events.

It looks like an impressive group of young guns. But you need look only at Frys.com winner Molder for a cautionary tale. Remember when he was in a group of young guns about 10 years ago? Just coming onto the pro scene then were Charles Howell III, Aaron Baddeley, Adam Scott, David Gossett, and Molder, with a precocious Sergio Garcia having already been around for a couple of years. Great things were predicted, but that group hasn’t set the golf world on fire.