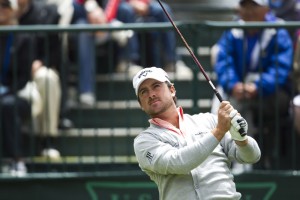 It was yet another good week for the ever more impressive Graeme McDowell. Copyright USGA/Steve Gibbons

Some observations on the Hyundai Tournament of Champions:

Graeme McDowell
I have to admit that I wasn’t overwhelmed by McDowell’s victory at the U.S. Open last summer. I thought he was merely a player with a nice game who took advantage of the struggles of others to win the title. Now I can see that the Northern Irishman’s game is much more than “nice.” Coming off his Ryder Cup heroics, a late-season run on the European Tour, and a victory at Tiger Woods’ Chevron World Challenge, he charged home with an 11-under 62 at Kapalua on Sunday to narrowly miss a playoff.

Does he have the game to threaten to become No. 1 in the world? While he does not overpower courses, I’m beginning to think the answer is yes.

Robert Garrigus
On Friday, Garrigus had a round every bit as solid as McDowell’s final round. For the week, the two of them tied for the lead in greens in regulation with 66 of 72. Garrigus missed a total of only three greens in the first three rounds, but missed the first two on Sunday. But after a bogey at the first lost him a share of the lead, he saved par from a bunker at the second, and began a long climb back toward the lead, regaining a share of it with a birdie on the 18th hole.

Garrigus took advantage of his length (he led the Tour in driving distance in 2010) in the final round by hitting all four par 5s in two for a quartet of two-putt birdies. None was more impressive than on the 663-yard 18th. The finishing hole plays downhill, and on many days is well in range to be reached in two. But it was playing into the wind on Sunday, so this wasn’t one of those days. Nobody else got there in two all day, but after a 377-yard drive, Garrigus crushed a fairway wood from 287 yards out and hit it to 13 feet.

Alas, he missed the eagle putt, then didn’t catch his drive quite as well when playing the same hole in a playoff, came up short in two, and settled for par. He proceeded to give the tournament away by missing a three-foot par putt on the second playoff hole. It wasn’t quite as bad as his triple bogey on the 72nd hole to lose a three-stroke lead (and then losing the playoff) at Memphis last year, but it didn’t enhance his reputation as a closer.

Garrigus did thoroughly enhance his reputation as an engaging guy, not only with his upbeat reaction to defeat but with his interviews and interactions with the fans throughout the week. For that matter, McDowell is another very likeable guy who gives good interview. Golf will be a better place if the two of them remain on leaderboards, and in media centers, throughout the year.

Jonathan Byrd
The winner was almost overshadowed by McDowell and Garrigus, even though Byrd held the lead for most of the day and came out on top. That’s nothing new for the soft-spoken 32-year-old who now has five PGA Tour victories. The first four of those came in low-profile events, and he’s never finished better than 39th on the money list.

While not quite as long a hitter as when he first came out on Tour, Byrd gets it out there pretty well for his relatively slight, 5-foot-9 frame using a Hogan-based swing. He’s never quite broken through on Tour, and had his career slowed by a hip injury, but with the biggest victory of his career under his belt he’s set up to enjoy what could be his biggest year.

He also has two victories in a row, having won at Las Vegas in his last tournament of 2010. The two wins were both in playoffs, but couldn’t have come in more different fashion: making a hole-in-one to win in Vegas and watching Garrigus miss from short range at Kapalua.

Steve Stricker
I hate it when Nick Faldo is right. The reason I hate it is because when he’s right, the Golf Channel (and CBS) commentator is sure to keep making the same point over and over and over again. On Sunday, Faldo said early on that Stricker, who entered the day tied for the lead with Byrd and Garrigus, tends to come up short and right on his putts under pressure.

To his credit, Faldo said this before Stricker missed any putts. To his detriment, Faldo kept hammering us over the head with the point. The last straw was when Stricker came up short again, this time to the left, and Faldo said something like, “Like I’ve been telling you, Steve tends to come up and short and left when things get tight.”

Hyundai Tournament of Champions field
The PGA Tour doesn’t exactly start its season with a bang with a field of about 35 players that doesn’t include all the marquee names. Tiger Woods (this year not qualified) and Phil Mickelson have been taking a pass on this event for years. This time such luminaries as Lee Westwood, Martin Kaymer, Rory McIlroy, and Louis Oosthuizen were no-shows. And, of course, with a field that includes only the previous year’s winners, there are always some good players who don’t win in any given year—and, let’s face it, some mediocre players who do.

That said, the tournament is more in need of tweaking than a major overhaul. One of the PGA Tour’s problems is trying to make too many tournaments a big deal—besides the four majors there are the Players, three WGC events, and four FedExCup playoff events, not to mention invitationals like the Memorial and Bay Hill. Unfortunately, that serves to take away the prestige of other tournaments. So, the Tour doesn’t need to try to turn the season opener into an extravaganza. It’s actually a nice idea to reward the previous year’s winners with a trip to Hawaii to start the season, and it has some resonance as a way to start the season.

There are a couple of things that can be done to make things better. Non-members Westwood, Kaymer, and McIlroy sat out because they didn’t want to use up one of the limited number of events they can play on the PGA Tour. Given the special nature of this event, it would make sense to not count it against their limit. (British Open champ Oosthuizen joined the PGA Tour this year but opted to play a European Tour event in his home country of South Africa instead of Kapalua—and won.) Another idea, particularly with Hyundai taking over as a new sponsor and having some input, would be to make winners of the past two years eligible. In fact, though, the reason for the decline in prestige of this tournament rests mostly at the feet of Woods and Mickelson.

Call-in DQ’s
Camilo Villegas was disqualified for a Rules violation in the first round that wasn’t discovered by officials until after he had signed his scorecard (he flicked away a divot as his ball was rolling back down a hill toward him after a pitch shot came up short). This brought the predictable spate of opinionating about how a viewer should not be allowed to get a player disqualified and how this would not be allowed to happen in other sports, with the underlying theme of how silly it would be for a television viewer in another sport to be able to call in and affect the outcome.

Well, golf isn’t like other sports because it doesn’t have officials on the spot making calls, so the analogy falls apart. In golf, players are responsible for calling penalties on themselves. But, unfortunately, they don’t know the rules all that well, and inadvertent violations occur. Those infractions might be spotted by another player, by a rules official, by a spectator, and, yes, by a television viewer. No matter the source, these need to be checked out.

The viewer who “turned in” Villegas, a man named Dave Andrews, said that he actually was trying to save the player from disqualification by reporting it before Villegas signed his scorecard. But instead of trying to reach officials by phone at the tournament, he tweeted about it. As it turned out, nobody picked up on it in time to catch Villegas before he signed his card.

At GolfObserver.com, Sal Johnson has suggested that the PGA Tour have a Rules official monitor each telecast. This is a good idea—it could even be an official who is at home that week, not one on site. But I would like to see a discussion about penalizing instead of disqualifying players if a violation is found after they have signed their card but before the end of the tournament. (After the tournament, players can be disqualified only if they knew before the competition closed that they had violated a rule.)

This wouldn’t even require rewriting the rules, just a different interpretation. Rule 33-7 states that a penalty of disqualification may be waived, modified, or imposed in exceptional individual cases. The USGA argues, and the PGA Tour to this point agrees, that this type of thing happens often enough that it is not “exceptional.”

It’s seldom publicly stated, but the USGA opposes any modification of the disqualification penalty because it believes that DQ is a serious deterrent against cheating, whereas a lesser penalty would not be. Or, not going quite that far, that players would be encouraged to have a lax attitude about knowing the rules if they knew they couldn’t be DQ’d for a violation.

I’d like to see the penalty modified this way. If a penalty for an inadvertent violation was discovered after a player signed his scorecard but before the end of the competition, the appropriate penalty for the infraction would be assessed—plus an additional two-stroke penalty for signing the incorrect scorecard.