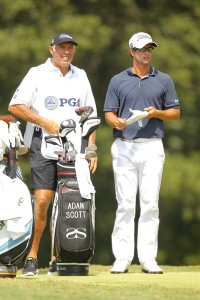 Taking a middle-ground approach to the Steve Williams mess:

Was what Williams said racially offensive?: Of course it was. In some quarters, you’ll hear that since Williams only used the word “black” it was merely factual. These people are not thinking clearly. When you add the word “black” in a comment about an “ass” (or “arse” or “a-hole” or “arse-hole,” whatever it was he said), the “black” is part of the insult. It’s not necessary to bring up the race of the person, nor to distinguish him from any white a-holes you might have known.

Is Williams a racist?: We don’t know, but I think probably not. It’s not so much because he worked for Tiger Woods for 13 years—that was a lucrative gig that even a racist wouldn’t have turned down—but that they formed a bond, were best men at each other’s weddings, etc. He made the comment at a rude and crude caddie affair. He probably got carried away, and just wanted to make his insult more dramatic.

If it came in the context of a rude and crude evening, can it be excused?: It can’t be excused or ignored. On the other hand, the circumstances are extenuating to some extent. It shouldn’t be viewed quite the same as if he had said it in a television or magazine interview.

Is the media blowing it out of proportion as part of an obsession with anything to do with Tiger Woods?: No, it’s not the media, it’s the public. Check out the size of the comments section of stories about Woods compared with other golf stories.

Is the racist angle overshadowing the aspect that Williams is, once again, acting (or at least speaking) like a jerk?: Yes and no. While the race aspect is getting the most play, you have to consider whether this would be such a huge story if so many people didn’t think Williams was a jerk to begin with.

Should Adam Scott fire Williams?: There are a few professions where making racist comments is a firing offense, but caddie is not one of them. In that sense, no, Scott doesn’t have any moral obligation to cut Williams loose. Of course, the player/caddie business relationship is one independent contractor hiring another, so it’s not the same as a company/employee relationship. Caddies are subject to being fired (if you can even call it that) for any reason, or even just on a whim. Scott obviously thinks Williams is a very good caddie, one who can help him perform better. On the other hand, having Williams on the bag could become such a distraction that it could become a negative. I think Scott has some feelings of guilt about getting Williams into the mess in the first place that kept him from pulling the trigger right away. First, about hiring Williams to work in the summer while Woods was hurt, which was apparently the reason Woods fired Williams. Also, Williams reportedly only attended the caddie dinner because Scott encouraged him to.

What should the PGA Tour do?: It’s been reported that the Tour can impose disciplinary action on caddies. While not a firing offense, public comments such as those Williams made could be grounds for a short suspension, maybe one week. Perhaps the Tour will suspend Williams for the Presidents Cup, where this mess could detract from the event (though it could be argued that any publicity is good publicity and that the possibility of Williams caddying in a match involving Woods would create interest).

If the Tour doesn’t take any action, does that reflect badly on golf as still a bastion of racism?: That’s taking it too far. Yes, there was a racially insensitive (at best) comment made in a public place, but considering all the circumstances it wasn’t a major incident—except that the personalities involved made it so. The tricky part is that the Tour doesn’t make public its disciplinary actions—though if there is a suspension, it will probably come to light one way or another.

Am I tired of writing about this?: Yes.

2 Responses to “Thoughts on the Steve Williams Mess”