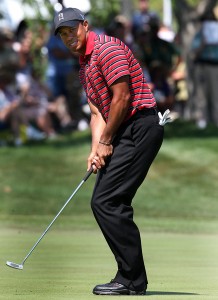 Tiger Woods returned to action at the Players, but maybe he shouldn't have. Copyright Icon SMI.

It was a strange Thursday morning at the Players Championship. The scores were very low at the TPC Sawgrass. But Tiger Woods’ score was very high.

Woods shot a 6-over 42 on the front nine and then withdrew for the second straight year at the Players. In 2010, it was due to a neck injury in the fourth round. This time Woods was coming back from a knee injury he suffered during the Masters four weeks ago. It appears that he came back too soon.

Doug Ferguson of the Associated Press (via Twitter) and Bob Holtzman of ESPN (in a television report) both reported that Woods was walking very slowly during his nine holes, especially up and down hills.

After withdrawing, Woods confirmed that he was having a hard time walking. “The knee acted up and then the Achilles followed after that and then the calf started cramping up. Everything started getting tight, so it’s just a whole chain reaction.”

Here’s the strange thing, though. He drove the ball very well and putted well—and still shot a 42. That’s how bad his irons and his pitching game were. Despite hitting all but two fairways and being able to go for the green in two on both par fives, Woods hit only one green in regulation, that on the par-three third. He needed only 13 putts and made an 18-footer on the fourth hole—for a triple bogey.

It would appear that rust was the biggest factor, though the difficulty walking must have been troublesome. Woods said on Tuesday that he didn’t hit any balls from the Masters until this Monday. He didn’t mention if he tried any short game shots, but it doesn’t look like it from the way he played.

The PGA Tour’s ShotLink system doesn’t tell anything about the lie of the ball or the difficulty of the shot, but his game around the greens was dreadful except for short chips and one nice bunker shot. It’s hard to see how his knee problem could directly have affected that.

On the first hole, he left a pitch 21 feet short. On the par-five second, left of the green in two and just 13 yards from the hole, he failed to reach the green with his pitch. Woods’ disaster hole was the short par-four fourth, where he found the rough with his tee shot, hit his 133-yard second into the water to the left of the green, took a penalty drop, then dumped a pitch shot into the water. On the fifth, he knocked a pitch shot 38 feet past. On the ninth, another par five where he was near the green in two, he dumped his pitch shot into a bunker.

With his irons, Woods was consistent—he missed everything to the left, except for one that went long. Injury or no, it was a shocking performance by the man with 14 major titles to his credit.

Woods likely came back at the Players partly because it’s a big tournament but mostly because he wanted to get ready for the U.S. Open. Now there’s a big question if he will be physically ready for the Open next month—and, even if he is able to play, whether his game will be just as rusty as it was on Thursday.

While Woods was literally limping and figuratively stumbling around TPC Sawgrass, Nick Watney and Lucas Glover—both winners this year—were shooting lights out. Watney finished with a 64 and Glover a 65.

Ben Crane was 4-under through 17 at the time of writing, and also was part of the strangeness. Playing the back nine first, and 3-under through seven holes, he hit his tee shot too far on the island green, par-three 17th. The ball landed on the wooden bulkhead behind the green and bounced all the way over the water behind the green.

It actually was a bad break, not a good one. He now faced a pitch shot from a significantly downhill lie in the rough, over water, to a green with water on the other side—a much tougher shot than he would have had from the drop area. He had no chance to get anywhere close to the flag on the back of the green; in fact, just keeping it on the green was going to be a challenge because there was no way to keep the ball from running after it landed.

Not even aiming at the hole, Crane didn’t quite catch his shot cleanly. It appeared it might find the water, but it barely cleared it—and landed on the bulkhead for a second time! It bounded across the green, but stayed dry, and Crane two-putted from a long distance for a highly unorthodox bogey.

It was a great escape for Crane—and an early exit for Woods.