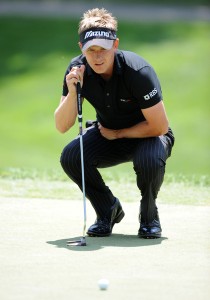 Luke Donald has been the best putter on the PGA Tour over the last couple of years. Copyright Icon SMI.

Golf has been behind other sports in detailed statistical analysis, but it made a big step forward last week when the PGA Tour unveiled its newest stat, called strokes gained-putting. Finally, we can truly know who are the best putters on the Tour instead of trying to guess based on flawed statistics and reputation.

Not to keep you in suspense, here’s what the stat shows based on my compilation of the data from 2004-11 (the Tour went back that far with the stat, using ShotLink data). The best putter overall in that period is Brad Faxon. The best putter in the early years of that range was Ben Crane, in the middle period it was Tiger Woods, and from 2009 on it’s been Luke Donald.

OK, nothing shocking there. Only the excellence of Crane on the greens has gone under the radar. But it’s nice to know that Donald was the No. 1 putter on the Tour in both 2009 and 2010 instead of just guessing.

And it’s interesting to be able to have a reliable gauge of putting as we trace how a player has done through the years. For example, Stewart Cink was one of the best putters in the game from 2004-8, but his decline overall in the last couple of years can be traced to the fact that he’s trending toward mediocrity on the greens. Crane has become a better overall player in recent years as he has greatly improved his ball-striking, but his putting has declined. Had he maintained his touch on the greens, he might have been a world-beater in 2009-10. Vijay Singh has never been a great putter, but in his peak years he managed to be average or a little better on the greens.

More on the best putters further down, and in future posts I’ll be looking at the worst putters and the putting prowess of the game’s top players. And here’s a look at the Wells Fargo Championship, where Lucas Glover won thanks to one of the best putting performances of the year.

First, some explanation about the stat.

It’s really not that complicated. It takes a player’s starting point on the greens and compares how many putts he takes from that distance to the Tour average from that distance. For example, he has a 15-foot putt. The Tour average from 15 feet is 1.790 putts. If he makes the putt, he has “gained” .790 strokes compared to an average performance. If he two-putts, he has “lost”.210 strokes; if he three-putts he has “lost” 1.210. When you add up the totals for a round, a tournament, or a year you can see how many strokes the player has gained or lost compared to an average putting performance over that span.

The traditional putting stats are influenced by how close a player’s ball is to the hole when he starts, which has nothing to do with putting. A player will tend to take fewer putts per round if he misses more greens because he can then chip the ball close. A player will tend to take fewer putts on greens hit in regulation (which the Tour used as its main stat) if he hits his approach shots closer to the hole. The Tour has now wisely made strokes gained its main putting stat and not merely one of the supplementary ShotLink stats that appear deep in www.pgatour.com.

Strokes gained-putting is based on the same principle I came up with in 2004 for an article in Sports Illustrated Golf Plus (I called it putting plus/minus), with a couple of refinements. At that time, I analyzed the ShotLink data from mid-2003 to mid-2004 to reveal that the best putter during that period was…Ben Crane.*

Now, here are the 12 best putters from 2004-11 based on strokes gained-putting. The numbers indicate strokes gained per round (minimum 250 rounds):

Faxon has long been considered one of the game’s best putters, and maybe the best. But he hasn’t been well served in the past decade by the Tour’s use of putts per GIR as its main stat. As his ball-striking, never his strong suit, became even more imprecise, he has ranked between 13th and 73rd in putts per GIR since 2004. (He did lead that stat in 1997, 99, and 2000 when his ball-striking wasn’t as bad and his putting might have been even better.)

Of the game’s top players over the last decade, Woods has been the best putter over that span except for Donald, who has only recently become a true prime-time player. The perception that Woods’s putting has dropped off precipitously in 2010-11 is correct. He ranked second to Faxon overall from 2004-9, but actually was a slightly below average putter in 2010 (-0.033 strokes gained). He’s been better in 2011 (.326), but that’s a small sample size that doesn’t include the Masters (not measured by ShotLink) and in any case is nowhere near what he did when he was at his best. Woods’ position of 12th in 2009-11 is a bit misleading because he putted extremely well in 2009 and has played fewer rounds in 2010 and 2011 so his per-round average hasn’t been pulled down as much as it might have been.

Who knew that Chalmers was so good on the greens? Doesn’t say much for the rest of the game, as he’s been unable to make much of an impact on the Tour.

Baddeley is this generation’s Faxon, though not quite as good with the blade.

Donald has followed up leading the Tour in this stat in 2009 and 2010 with a ranking of 13th so far this year. It would no doubt be higher if stats from the WGC-Accenture Match Play, which Donald won, counted.

Putting has been one of the keys to Matt Kuchar’s rise in the last couple of years, though he has actually improved his game in all areas.

A glance at the players on the lists shows that there’s a lot more to success on the PGA Tour than putting. Ben Hogan would be pleased to know that.

*The strokes gained-putting stat was developed by a couple of college professors, who I’m sure never saw my article. Columbia Business School professor Mark Broadie got the ball rolling with his “strokes gained” concept, which can be applied to areas other than putting. As an example, let’s take a hole where the scoring average is 4.1. If a player hits a long, straight drive to a spot from which the scoring average is 3.9 he has gained 0.2 strokes with that drive. If he hits it in the trees to a spot where the scoring average is 4.5, he has lost 0.4 strokes. Assuming there is enough data to accurately assess the baseline score from various spots on the course, this analysis can be done on every stroke. The Tour is currently working on this to see if stats can be developed on various aspects of the game based on this concept.

The putting analysis was further developed by an MIT team led by Stephen Graves. The clever thing they did was to base it on the number of strokes a player takes from his starting point on the green instead of looking at every putt individually. Thus, they were able to account for how close a player leaves the ball to the hole when he misses the putt. (This is the one thing my stat didn’t reflect. I didn’t have the data to work with that would have enabled me to include this in my analysis, but even if I had I’m not sure I would have thought of it.)

There’s very little that can be said against this stat as an absolutely true measurement of players’ putting ability. The one thing it doesn’t account for is that not all putts from the same distance are created equal. A straight 10-foot putt is easier than one with a big break. Over the course of a season, however, this should even out. In any case, distance is still by far the most important factor in putts, so this is still a good indicator of how well a player putts over a shorter period.

This stat takes into account the fact that some courses may have more difficult greens by basing a player’s strokes gained against that of the field each week. If the field had an average of .030 strokes gained per round and a player had an average of 1.030, he would be credited with 1.000 for the strokes gained stat. This makes it superior to stats such as greens in regulation based on raw numbers, which give a disadvantage to players who play harder schedules (i.e., the ones who qualify for all the majors).

The MIT team’s research paper developing this concept made a further adjustment for strength of field. But in developing the official stat both the Tour and the professors agreed that this would not make a significant difference, so it was not done.

By the way, the Tour has for the last couple of years been using a stat called “total putting,” not as its main putting statistic but as one that can be found in its more detailed stats. The idea is the same, but it’s been somewhat of a blunt instrument since it’s based on a compilation of player’s rank in putting from various ranges, like 3-5 feet, 5-10 feet, etc. Strokes gained-putting, on the other hand, is very precise.

The only real imperfection of the new statistic is that not every round is accounted for. This stat requires ShotLink data on distance to the hole, not available for the major championships (which are not run by the PGA Tour), secondary courses at events held on more than one course, and secondary events held the same week as another event.

That’s a bit unfortunate. Still, all things considered, this is a great leap forward and the best stat the PGA Tour has.

One Response to “Who Are the Best Putters on the PGA Tour? Now We Really Know”