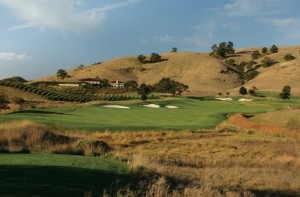 The Frys.com Open moves to CordeValle.

The PGA Tour’s Fall Series flies under the radar. With the FedExCup and Ryder Cup behind us and football on center stage in the sports world, the remaining PGA Tour events don’t receive much attention.

For the die-hard golf fan, though, the Fall Series holds plenty of appeal. There’s the lives-on-the-line aspect of the players near the line of 125th on the money list to see who keeps their exemptions next year and who heads back to Q-School. There’s also a who-gets-into-the-Masters angle. While winners don’t receive an automatic Masters invitation, the top 30 on the money list do. And the winners of the first two Fall Series events, Bill Haas at the Viking Classic and Heath Slocum at the McGladrey Classic, both moved into the top 30. Haas secured a definite spot in the final top 30 by finishing second at the McGladrey, while Slocum still has some work to do at 29th.

This year, the money title, Vardon Trophy, and the Player of the Year voting could be affected by the events of the Fall Series, with Matt Kuchar currently leading the first two races and Jim Furyk with a leg up on Player of the Year but none of it quite assured.

And there’s another bonus in 2010. Two outstanding courses, Sea Island’s Seaside Course in Georgia and CordeValle in California, are hosting PGA Tour events for the first time. Last week, the McGladrey Classic, a new tournament, was held at Sea Island. This week, the Frys.com Open moves from its former Arizona home to CordeValle.

Both are located at high-end resorts. The Seaside Course at Sea Island was designed in 1929 by Charles Alison and Harry Colt, and received an extensive redesign by Tom Fazio in 2000. Golfweek ranks it 17th on its list of the Top 100 Resort Courses in the U.S. CordeValle was designed by Robert Trent Jones Jr., opened in 2000, and is ranked 37th on the Golfweek resort-course list.

The Seaside Course measures only 7,055 yards, but held up against the pros as Slocum won at 14-under. The tournament was boosted by having Sea Island resident Davis Love III as host and fellow residents Kuchar and Zach Johnson in the field just a few days after competing in the Ryder Cup.

The Frys.com Open has its own Ryder Cupper, 21-year-old Rickie Fowler, who gained fans with his comeback from four down in his singles match to halve Edoardo Molinari in Wales. The field also includes notables such as Justin Leonard, J.B. Holmes, Henrik Stenson, Tom Lehman, Stuart Appleby, and, in the “name” category, John Daly and David Duval. Fowler made his breakthrough at this tournament last year, losing in a playoff to Troy Matteson as a newly-minted pro, helping him to earn his PGA Tour card without going to Q-School in another Fall Series sub-plot.

The Frys.com is moving to northern California, close to the San Jose headquarters of sponsor Fry’s Electronics, after spending its first three years in Arizona. With the planned eventual site, The Institute Golf Club at Morgan Hill, still not ready to host a tournament, the organizers were fortunate to land nearby CordeValle in San Martin for the next three years.

CordeValle is located in a pristine setting in the California wine country, and the players’ wives will enjoy the spa at the Rosewood Resort that also features a winery. The golf course is a well-conditioned gem that will force the players to think.

While it has good length at 7,368 yards, CordeValle has a number of par fours that will cause players to think about whether they want to hit a driver and bring fairway bunkers into play or hit a three-wood to a wide part of the fairway. In other cases, long hitters might be able to rip it over fairway bunkers.

“Each shot has lots of value,” says CordeValle director of golf Michael Marion. “It’s not a course to just stand on the tee box and swing away.”

The course is being converted from a par of 72 to 71 for the tournament, and the nines are reversed. The tournament 17th is an interesting hole coming down the stretch, a 365-yard par four where if the tees are moved up or conditions are favorable players might be tempted to try to drive the green. To do so, they must avoid water to the right and steer through an opening between bunkers at the front of the green. That’s followed by a picturesque 18th hole, where the fairway is divided into left and right sections by a stream.

Can another player move into the top 30 this week? Can Fowler claim his first PGA Tour victory? Will veterans Dean Wilson, Briny Baird, and Woody Austin, and rookie Aron Price, currently 122nd through 125th on the money list, be able to keep their places in the top 125? Most of America will be watching football, but it’s worth keeping an eye on golf, too.