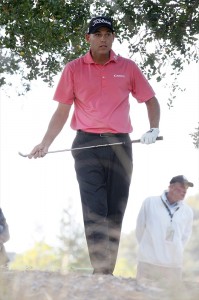 How do you hit only half the greens in regulation for the week and walk away with a victory? You’ve got to have the touch of a magician around the greens.

That was the formula for Bill Haas in the Northern Trust Open at Riviera last weekend. This is the guy who splashed his way to an up-and-down from a water hazard to win the Tour Championship, so maybe we should give him a wizard hat. The funny thing is that Haas is normally not so terrific around the greens or on them. Last year, he ranked 79th in scrambling (making par after missing the green in regulation 58.3 percent of the time) and 84th in putting (gaining .115 strokes per round).

In fact, hitting greens is his strength: He ranked 11th on Tour in greens in regulation in 2011. Not the profile of a guy you expect to scramble his way to victory when he doesn’t have his A game.

Riviera played tough last week due to windy conditions, with a winning score of 7-under, and it was harder to hit the greens than a typical week. But Haas’s total of 36 greens in regulation (7, 10, 11, and 8 in the four rounds) ranked 50th among players making the cut, so he really did make things hard for himself relative to the field.

Did he really hit the ball that poorly or does the GIR stat deceive? He was on the fringe in regulation six times and he hit three greens in one better than regulation (par fives in two). Those are somewhat above the norm, so his ball-striking was somewhat better than his GIR total would appear.

Still, it’s fair to say he hit the ball worse than he usually does. It’s not like he was hitting his irons close on the greens that he did hit—Haas had only one birdie putt of less than five feet other than the three par fives he hit in two. And it’s not like he always missed the green in spots where it was easy to chip the ball close. In fact, he left himself 10 very difficult up-and-downs where he was either more than 25 yards from the hole in the rough or a bunker, pitching over a bunker to the short side, or well back in the fairway after a poor tee shot.

Let’s compare this to Kyle Stanley, who led the field in greens in regulation but finished seven strokes behind in a tie for 24th at even par. Not only did Stanley hit 13 more greens than Haas, with 49, he was inside five feet in regulation 11 times and left himself with very difficult up and downs only twice (though one of them was so bad—hitting the lip on a fairway bunker—that we should double it to effectively make a total of three).

Haas got up and down on 26 of the 36 greens he missed, including an impressive five of 10 on his very difficult chances. But there’s more to it than that. The key to his victory was that he holed out from off the green four times—unheralded because they all happened before the weekend. That means he was only 6-over on the 36 greens he missed—nine strokes better than Stanley’s total despite missing more greens.

Stanley was 15-under on the 49 greens he hit—not all that great considering he was within five feet in regulation 11 times, five-to-10 feet five times, and 10-to-20 feet 13 times. He ranked 58th for the week in putting, losing .483 strokes per round (a total of two strokes for the tournament).

Haas’s up-and-down prowess was fueled equally by chipping and putting. For the week, he gained 2.351 strokes per round on the greens (a rounded-off total of about nine strokes for the tournament). That helped him to be 13-under on the 36 greens he hit, even with fewer short chances than Stanley—four inside five feet, seven from five-to-10 feet, and nine from 10-to-20 feet.

Haas didn’t even lead the field in putting. Keegan Bradley, who along with Phil Mickelson lost to Haas in a playoff, led with 2.378 strokes per round. The difference was that Haas holed those four times from off the green. One of them was essentially just a 10-foot putt from inches off the putting surface in the first round. But the three others came in a vital four-hole stretch during the second round.

Haas was wobbling along at 2-over through 30 holes in a tournament—not even assured of making a cut that eventually came at 3-over. Then he holed out from 12 yards from the intermediate cut for a birdie on the fourth hole (he started on the back nine that day), holed a 16-yard shot from the fairway 12 yards short of the green on the fifth hole, and holed an 8-yard shot from the fairway two yards short of the green on the sixth hole. ShotLink doesn’t say what clubs the player used, and Haas wasn’t brought to the media at four strokes off the lead after the round, but it’s likely the first two were chip-ins and the third a putt from the fringe.

Haas’s up-and-downs on 14 of 17 chances on the weekend, another on the first playoff hole, and his 43-foot putt to win on the second playoff hole ultimately earned him the victory—but he wouldn’t have been in position at all without the second-round hole-outs.

All in all, missing so many greens is an unlikely path to victory. Even a great week with the wedges and putter is likely to be trumped by a player who hits more greens while also wielding a hot putter. Occasionally, though, it will work out. Bill Haas will take it.