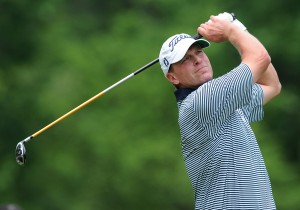 Steve Stricker won last week at the John Deere Classic, can he follow it up at the British Open? Photo copyright Icon SMI.

If you won your last tournament, does that make you more likely to win your next one because you’re hot? Or less likely, because two wins in a year is considered to be very good on the PGA Tour so it’s a tough feat to win two in just two starts?

Those are relevant questions heading into the British Open, because four of the best players in the world come to Royal St. George’s having won their last tournament. Steve Stricker and Luke Donald won last week at the PGA Tour’s John Deere Classic and European Tour’s Scottish Open, respectively. Nick Watney won two weeks ago at the AT&T National and took last week off. And Rory McIlroy hasn’t played since winning the U.S. Open.

There are a couple of other questions involved here, too. Is it better to play the week before a major or not? And was McIlroy wise to take three weeks off after winning at Congressional? But those are more a matter of individual preference.

Recent history is fairly encouraging for these players. Since 2000, eight players have won a major after also winning their last event. True, on four of those occasions the player was Tiger Woods, and none of the current quartet are reminiscent of Tiger in his prime—not even Rory (who has only three career wins). Still, four others have done it, which is a significant number for a period of just over a decade. The list:

It hasn’t happened at the British Open, by the way, since 1994 when Nick Price followed up on his Western Open win.

Only two of those victories came the week before, but that’s accounted for by the fact that many top players skip the week before a major. And the presence of Beem and McDowell on the list shows that you don’t have to be a dominant player to pull off the feat.

So far, so good. But I do find a red flag for Watney and Stricker. They won their last tournaments thanks largely to exceptional putting.

The PGA Tour’s strokes gained stat shows that Watney gained 2.737 strokes per round on the greens in winning the AT&T National—in other words, over the course of the tournament, he scored 11 strokes lower than he would have with average putting from the distances he putted from. That’s the seventh best putting performance by a winner going back to 2004, when ShotLink began.

Watney made 11 of 12 putts in the 6-to-8-foot range, didn’t miss any inside of that, and he also made four putts outside 20 feet, three of them in shooting a 27 on the back nine in the third round at Aronimink.

Unfortunately, it’s very hard to repeat—or even come close to repeating—such an outlier performance on the greens for a second straight tournament. The strokes gained-putting stat shows great variance from week to week for any individual player. Repeating a performance like Watney’s at the AT&T would be like a batter going 4-for-4 two games in a row in baseball.

Stricker was nearly as good at the John Deere, gaining 2.234 strokes on the greens, or nine strokes over the course of the tournament. Realistically, he was better than that because the stat doesn’t count two times he holed with a putter from the fringe—including the 25-footer on the 72nd hole to win the tournament.

The European Tour doesn’t have the strokes gained-putting stat, so we can’t evaluate Donald’s Scottish Open putting performance in detail. The main question with Donald is that he hasn’t been a prolific winner in the past, but he now has three wins in 2011 (two in Europe). Does he have it in him to be a four-win-a-year man? Let’s not put it past him. He might be playing well enough now to pull it off.

Stricker (first), Donald (fourth), and Watney (fifth) all rank in the top five on the PGA Tour in strokes gained-putting for the year. It’s fairly unusual for players who strike the ball as well as they do to also be great putters (Woods in his prime aside), so it’s no wonder they are having great years.

No one would consider McIlroy to be among the best putters in the game, but he’s certainly one of the best ball-strikers, perhaps the best at the moment. After his out-of-this-world performance at the U.S. Open, all eyes will be on him at Royal St. George’s, even more than Donald, who is merely the No. 1-ranked player in the world and coming in off a victory last week.

McIlroy was originally scheduled to play in the French Open, situated nicely two weeks after the U.S. Open and two weeks before the British Open. But after Congressional he decided that he wouldn’t be ready for France after a week-long celebration. And he declined to add the Scottish Open, opting not to play the week before a major. On Tuesday, he said he’s glad he didn’t play there, considering the weather, which reduced the tournament to 54 holes. Instead, he got in a couple days of early practice at Royal St. George’s.

Will McIlroy be sharp after three weeks off? Or was he better off resting rather than going through a hectic period after the U.S. Open?

Interestingly, McIlroy also took three weeks off before this year’s Masters. You can’t say there was any rust there, as he opened with a 65 and led through each of the first three rounds. He then shot a final-round 80, but that can’t be attributed to the layoff. So McIlroy should be good to go—not that it will necessarily translate into a victory. It will take some time to see whether the U.S. Open represented a permanent leap forward or a merely a shining moment.