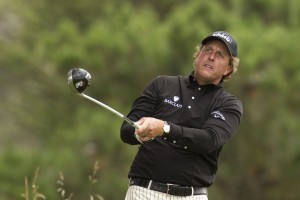 Phil Mickelson is riding high after a 64 to win at Pebble Beach. Photo copyright Icon SMI.

Some surprising facts from the Phil Mickelson-Tiger Woods showdown on Sunday at the AT&T Pebble Beach, where Mickelson claimed the title with a 64 and Woods went the other way with a 75 to finish T15.

Mickelson hit 13 of 14 fairways in the final round. This was after finding just 21 of 41 fairways in the first three rounds and from a man who has ranked no better than 179th in driving accuracy in the last five years. His one miss was a pretty bad one almost into Dustin Johnson territory on the third hole, but he managed to hit the green from there.

Woods missed three putts inside three feet—and blamed himself instead of bumpy greens. In his interview on CBS with Peter Kostis and again in talking to reporters, Woods didn’t utter a word about the greens, instead saying, “I couldn’t get comfortable. I couldn’t get the putter to swing.”

Woods was generous in praise of Mickelson. When asked by reporters about Mickelson’s play, Woods commended Mickelson for hitting the ball flush and for controlling his trajectory and spin on his wedge shots. From pro to pro, that’s higher praise than the typical back-handed compliment about making everything on the greens.

The biggest difference really was putting. Mickelson gained 4.652 strokes on the greens and Woods lost 4.299 strokes compared to a Tour average performance. In other words, Phil turned a 69 into a 64 with his putting and Tiger turned a 71 into a 75. Mickelson made more putts from outside 20 feet (three) than he missed from inside 20 feet (two). Woods missed five putts from inside six feet and made only one putt outside six feet (a 13-footer on the 10th).

But Mickelson’s ball-striking edge wasn’t insignificant. Woods helped himself by holing out from a bunker on the 12th, saving one or two strokes. Taking that into consideration, Mickelson’s two-stroke tee-to-green edge was more like a three-stroke advantage on full shots.

Mickelson picked up a stroke on Woods on six straight holes, starting at the fourth. Mickelson was one behind Tiger with 15 holes remaining before gaining exactly one stroke on each hole with birdie-birdie-eagle on 4-5-6 and three Woods bogeys on 7-8-9.

Slamming the door. Woods figured to cut Mickelson’s lead from five strokes to three when he holed the bunker shot on 12, but Phil sank a 30-foot par putt there and birdied the next with an approach to two feet to go back up by six.

Unpredictable Phil. This is the third year in the last six that Mickelson has opened his season with three poor performances followed by a victory. In 2007, he started T45-T51-cut before winning in Phoenix, in 2009 he went cut-T42-T55 then won in Los Angeles, and this year he opened T49-cut-T26 before Pebble Beach. What will Phil do next? You can never base it on what he did this week.

Play-It-Safe Phil? Mickelson accepted caddie Jim Mackay’s suggestion and hit a 4-iron off the tee on the 18th. Then again, he made a risky play by hitting a driver on the 16th.

Historic Phil. The victory made Mickelson the 10th player in PGA Tour history with 40 victories, tied at that number with Cary Middlecoff. He moved one ahead of Gene Sarazen and Tom Watson and trails only Sam Snead, Jack Nicklaus, Woods, Ben Hogan, Arnold Palmer, Byron Nelson, Billy Casper, and Walter Hagen.

Tiger’s Sunday woes. It appears that Woods has rebuilt a swing that can last for 54 holes but not 72 yet. In his last outing at Abu Dhabi he hit the ball beautifully for three days and then hit only two fairways and six greens in the final round. This time he hit 10 fairways but only nine greens, not to mention his putting disaster. Without an official win since 2009, the greatest pressure player in the history of the game is in the unusual position of learning to play in the Sunday heat again.

What does it mean? It doesn’t mean that Mickelson permanently has Woods’s number. Golf is too changeable, and even Phil said Sunday that Tiger is on the right track. But it was a big feather in Mickelson’s cap. The way he did it, with every aspect of his game clicking, means there’s plenty of gas left in Mickelson’s tank at age 41, about which there was some question after a lackluster 2011. For Woods, it’s the continuation of a trend. He looks very much like a player who is ready to break out with a win soon, but not very much like a player who will dominate the game the way he used to.

Here’s one more thing it means: No matter that they’re not in the top 10 in the world ranking—Mickelson and Woods are still the heavyweights of golf.