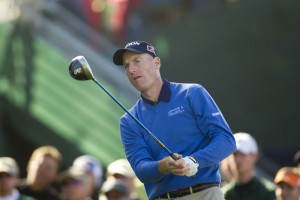 Jim Furyk entered the Tour Championship ranked 157th on the PGA Tour in sand saves, getting it up and down 40 times in 93 chances for a percentage of 43.01.

At East Lake, he was in nine bunkers and got up and down all nine times while winning the Tour Championship by one stroke and claiming the FedExCup and its $10 million bonus. It all came down to a bunker shot on the 72nd hole. A successful sand save would earn him the tournament, the FedExCup, and all that dough. Failure to get up and down would put it all in jeopardy, sending him to a playoff with Luke Donald.

You and I, perhaps, would think, “Man, I’ve gotten it up and down a bunch of times in a row. Maybe that streak is due to end.”

Top pros don’t think that way. “This was probably my best bunker week of my career this week,” Furyk said afterwards. “I had a lot of confidence.”

Furyk, in fact, didn’t know just how good his week was out of the bunkers. “I was probably 80 percent or more,” he said, before being told that he was nine-for-nine. “That’s usually 100 percent, even at Arizona,” said the University of Arizona product.

Furyk said he was protecting against going long and left on his tee shot on the 235-yard, par-three 18th hole. It’s a very difficult up-and-down from over there, as he learned from experience when he made a bogey in 1998 to finish one shot out of a playoff between winner Hal Sutton and Vijay Singh. That may have contributed to his coming up short and right, in the bunker.

“Under the situation, it was a tough bunker shot,” said Furyk. “If you take the situation out, the sand is nice and firm, the ball is sitting up perfect, I had plenty of green to work with. You know, it wasn’t an overly hard shot.”

The situation was almost unprecedented, at least in monetary terms. The first three years of the FedExCup, with its $10 million bonus, first place was not determined on the final hole. This time, a victory for Furyk meant $10 million, but if he finished second he would finish eighth in the FedExCup standings and his bonus money would be $700,000—a difference of $9.3 million. Also, a victory in the tournament would mean $1,350,000, while a runner-up finish was worth $810,000—a difference of $540,000. Total difference between first and second: $9.84 million.

Nobody has ever faced such a “money” bunker shot. Furyk nearly holed it, and watched from well below the surface of the green as it trickled to a stop two feet, five inches from the hole.

“I had kind of the worm cam view,” he said. “I was just saying stop, stop, stop. It kind of appeared like it was a four-footer, like I had some work left.” Imagine Furyk’s relief when he climbed out of the bunker and saw it was close enough to be pretty much “dummy proof,” as he said.

Furyk had been leaking oil coming in, with bogeys on the 16th and 17th holes cutting his three-stroke lead to one. His tee shot on the 18th didn’t help matters. So, he had himself to blame for turning the bunker shot into a pressure cooker, but with the tournament and cup on the line, he responded to the pressure in style.

Reflecting back on bunker shots on the 72nd hole in big tournaments, the last one I can think of that carried such significance was Curtis Strange at the 1988 U.S. Open. The situation was similar in that he had just bogeyed the previous hole, but in his case he needed to get up and down to finish in a tie with Nick Faldo and force a playoff. He got the job done, too, and then won the playoff.

In regular tournaments, it’s hard to top Larry Nelson, who was one stroke behind when he stepped into a greenside bunker on the 72nd hole of the Greater Greensboro Open, holed the shot for a birdie, and then beat Mark Hayes in a playoff. Furyk had a great bunker moment of his own when he holed out for a par on the first playoff hole of the 2001 WGC-Bridgestone Invitational to stay alive against Tiger Woods, but he ended up losing the playoff.

“I didn’t like hearing about that one so much, so maybe people will remember this one a little better,” Furyk said.

I think they will.

Furyk, by the way, finished the week ranked 109th on Tour in sand saves, a rise of 48 places, at 48.04 percent. Here’s a rundown of his nine-for-nine, which was truly a reflection of outstanding bunker play as he did not have to make a putt of more than five-and-half feet for any of his saves: