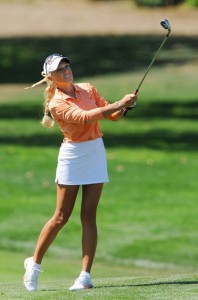 Natalie Gulbis and her confreres may get to major in French

According to news reports last week, officials of the Evian Masters in France were talking to LPGA Commissioner Michael Whan about designating their tournament a major championship. No, the LPGA isn’t losing any majors. They were talking about making it the fifth major.

Apparently, they figure if the Champions Tour can do it, they can, too. Everyone thought four majors was the maximum until the Champions Tour decided to add the Senior British Open as a major in 2003 without eliminating any of the other four (U.S. Senior Open, Senior PGA Championship, Senior Players, The Tradition).

This is one area where it’s nice to be a lesser tour—the majors are what you say they are. Commissioner Tim Finchem of the PGA Tour doesn’t have that power, or the Players Championship would have been a fifth major a long time ago.

The men’s majors aren’t designated, they just are, by mutual consent. The number was initially set at four by Bobby Jones’s ultimately successful pursuit of the Grand Slam (U.S. Open and Amateur and British Open and Amateur). But the professional majors didn’t become established in people’s minds until Arnold Palmer and his sports writer friend Bob Drum invented the modern Grand Slam in 1960 after Palmer won the Masters and U.S. Open and headed overseas in pursuit of the British Open.

American pros had largely stayed away from the British since the late 1930s, but Palmer changed that. When emerging star Jack Nicklaus and other Americans followed Palmer and pursued the Open Championship in ensuing years, the modern four majors were established (the Masters already having achieved de facto major status even before 1960).

The Tour players split from the PGA of America in the late 1960s, and a few years later started their own Players Championship. But the PGA Championship had too much history and momentum for it to be overturned as a major. And the consensus was that four was the right number for majors, so the Players never had a fighting chance to be the fifth major. That leaves the PGA Tour in the unusual position of not being the sponsoring body of any of its majors.

Frankly, I wish people weren’t stuck on the number four, because I think the game would be better off with another major. If we are going to use majors as the main measuring stick for greatness, four per year is an awfully small sample size. The smaller the sample size, the less reliable the data. If we evaluated players over a greater number of tournaments—still limiting it to events that all of the world’s top players competed in—we would get a more accurate representation of how good they are.

As it stands, we are making strong judgments about players by whether they have won one, two, or three (or zero) majors in their careers, when in fact there is a lot of randomness in the results. The randomness comes from whether the players happened to be playing well in those particular weeks, and from whether another player happened to shoot lights out—or, conversely, give the tournament away—in a particular week.

Of such randomness, Hall of Fame judgments are made. But adding the Players Championship would give us more data, and that would be a good thing, especially since it’s reliable data. To win the Players Championship, you have to beat every single top player in the world just like you have to do at the majors. Major totals are a good measuring stick for players like Nicklaus and Tiger Woods, but only for those who have won more than a handful.

When it comes to a single year, it’s even worse. To knock a player down a peg because in an otherwise outstanding year he didn’t win in one of four particular weeks isn’t really fair.

All that said, I’m not sure that I’m in favor of the LPGA Tour adding another major. When the Champions Tour added a fifth major, it at least was adding a tournament that seemed like a natural major, the Senior British Open.

That won’t be the case if the LPGA adds the Evian, or another tournament, as a major. It would feel artificial and the new major would be very much a fifth wheel and have trouble earning acceptance as a legitimate major in the eyes of the golf public—especially since most people instinctively feel that there should be four majors.

And why a second major in Europe? Yes, the LPGA is becoming an international tour, but if you were to reflect that by adding another major outside the United States, the logical place would be Asia. Of course, the Evian isn’t being considered because of its European site, but because it is a well-established, well-run event with a purse that matches the U.S. Women’s Open for the highest on Tour.

Then again, it’s only a couple of years ago that people were writing that players had dubbed the Michelob Ultra Open at Kingsmill the “fifth major.” That tournament ended after 2009, when sponsoring Anheuser-Busch dropped it.

The PGA Tour doesn’t have to worry about sponsors for its majors, but that’s a big issue for the LPGA. In fact, the requirement of sponsorship for the LPGA Championship has cost the organization two events on its schedule.

The LPGA Championship didn’t originally have a sponsor, but when purses rose on the LPGA Tour it became necessary to find one, given that the championship couldn’t command high television rights fees which would have enabled it to support a large purse on its own. Mazda came aboard as a sponsor in 1987, but when it pulled out after 1993 a desperate search began. The McDonald’s Championship was one of the most successful events on the Tour, so the LPGA decided to make that tournament the LPGA Championship—which meant the loss of a top-flight tournament on the schedule.

Then after 2009, McDonald’s dropped out and the LPGA decided to take over ownership of its own championship again. But it couldn’t run it without finding a sponsor, and it couldn’t find a new sponsor. So in 2010, the regular Rochester stop became the LPGA Championship Presented By Wegmans—another net loss of a tournament on the schedule.

The LPGA also faced an issue in 2000 when one of its designated majors, the du Maurier Championship in Canada, went bust. A decision had to be made about what would replace it as a major, and the Women’s British Open was the logical choice, gaining that status in 2001.

The LPGA majors have an odd history. The U.S. Women’s Open and LPGA Championship were always majors in the “everybody knows they are majors” sense. But in 1979, the LPGA decided two wasn’t enough and designated the Peter Jackson Classic as a major.

It was partly because of the purse, which dwarfed all other tournaments. But it was also because of the television exposure. The Women’s Open was the only other televised LPGA event back when the Dinah Shore started in 1972, and the Dinah Shore got better coverage than the Open. Both the money and the TV screamed “this tournament is a big deal” at a time when the LPGA was decidedly not a big deal. In 1970 and 1971, the LPGA was going through doldrums, with the number of tournaments and purses down from previous years (sound familiar?) The Colgate Dinah Shore played a big part in jump-starting the revival of the Tour before the stunning rookie year of Nancy Lopez in 1978 provided another jolt.

The whole world was watching the Dinah Shore in the 1970s at a time when, overall, the LPGA had a smaller niche than it does today. The players were all there, and they probably wanted to win this tournament more than any other except for the Women’s Open—and maybe more than the Open. In the unofficial sense, it was a major. And yet when the LPGA decided to designate majors, it initially didn’t pick the Dinah Shore.

It wasn’t passed over because of corporate sponsorship—Peter Jackson was a cigarette company (the name was later changed to the du Maurier Classic, another brand within the same company). In fact, it was a Canadian law restricting cigarette advertising and sponsorship that brought the tournament to a halt after 2000.

In 1983, the LPGA decided that four majors were better than three, and finally designated the Dinah Shore a major. But it didn’t retroactively declare past winners of the tournament a major, even though it had been won mostly by the top players of the era—Jane Blalock, a semi-retired Mickey Wright, Kathy Whitworth, Sandra Palmer, Judy Rankin, and, in 1981, Nancy Lopez. But if you look at the official LPGA records they will tell you that the only major Lopez won was the LPGA Championship (three times). Ironically, the tournament formerly known as the Dinah Shore, now the Kraft Nabisco Championship, is not as big a deal among the general public as it was in the 1970s.

One reason the LPGA didn’t retroactively declare past Dinah Shores majors was that it hadn’t done so for the Peter Jackson. And, why would it? The Peter Jackson was a run-of-the-mill tournament before it was designated a major. For that matter, it wasn’t all that special a tournament even after it became a major. Lopez even skipped it for a couple of years in the 1980s, and what kind of major is it when the best player in the game doesn’t enter? (She was Player of the Year in 1985, one of the years she didn’t compete.)

But the LPGA did act retroactively in declaring the old Titleholders and Women’s Western Open, which ended in 1966 and 1967, as majors for the players of an earlier era. In fact, it took the Titleholders all the way back to its beginning in 1937 and the Western back to its start in 1930, even though there were only a handful of top players (nearly all amateur) in the 1930s. You’ll find Patty Berg as officially leading the LPGA in majors with 15 but that includes seven before the formation of the LPGA in 1950 and three from before the formation of the first women’s professional association, the WPGA, in 1944.

Should the LPGA go to five majors now? As stated, I think in some ways five is a better number. But there’s no other LPGA tournament out there, including the Evian Masters, with the gravity or appeal of a potential major. We don’t need another Peter Jackson Classic.

7 Responses to “A fifth LPGA major?”