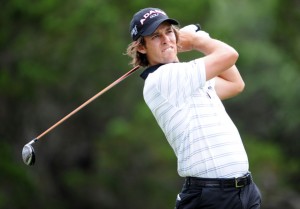 Aaron Baddeley isn't known for his ball-striking, but it was solid at the Northern Trust. Credit Icon SMI.

They finished 1-2 at the Northern Trust Open at Riviera. How did they do it? Baddeley won with superb ball-striking and Singh owed his lofty position to great putting. There might not be an unlikelier occurrence on the PGA Tour all year.

Baddeley ranked 18th last year in total putting, the Tour’s most reliable putting statistic, and has been as high as 3rd during his career. Singh ranked 188th out of 192 players in 2010.

But it was Singh draining putts from everywhere during the four rounds, holing seven putts from 20 feet or longer among 12 that he made from at least 10 feet*. Baddeley, meanwhile, officially made just two putts of 20 feet or longer among six from at least 10 feet, though to be fair we should note that he made three putts from the fringe that raise those numbers to four from 20+ and nine from 10+. That’s still well short of Singh.

The 48-year-old Singh has probably tried every length putter and nearly every putting style imaginable over the course of a long career that has been noted for ball-striking prowess often been subverted by frustrations on the greens. Apparently, there were still a couple of things he hadn’t tried.

Singh recently switched to a new putter and, perhaps more importantly, a new grip. “I tried to get a grip where I feel really comfortable with, and hopefully this is the one. It anchors my left hand pretty nicely, and I don’t have any play with my right,” said Singh.

It may be yet another temporary band-aid in a series of short-lived solutions, but the results were eye-opening. Singh called it “the best putting week I’ve probably had all my career.”

For the week, he led in putts per round with 26.25. That stat holds up to greater scrutiny looking at the length of his putts: An analysis of how he putted from various distances shows that he took seven fewer strokes on the greens than would be expected with an average performance. And that’s even with missing two putts from inside three feet!

Singh might have won the tournament, except that he ranked only 38th in greens in regulation, hitting 43 greens.

Baddeley was one of the early practitioners of the stack-and-tilt swing and had some success in 2006-7 when he scored both of his victories. But even then his ball-striking was shaky, and he went back to his original teacher Dale Lynch in March of 2009. The results really haven’t been that good—until last week.

“It’s definitely been a couple of long years, but it’s been worth every bit,” Baddeley said after a final-round 69 that enabled him to convert the third-round lead into his third career victory. “Step by step, we just sort of put the pieces together, built the foundation. The product today was being able to hit the shots that I needed to hit.”

Baddeley was able to win despite not putting as well as he usually does. He ranked 35th in putts per round for the week, and my analysis of his strokes on the green showed that he was one stroke worse than average from the distances he faced. However, we really should also consider the strokes with the putter from the fringe since those involve putting skill. He made one from five yards in the first round and two key ones during the final round—from seven yards on the seventh hole for a crucial three-stroke swing on Fred Couples, who had taken over the lead, and a big breaker from nine yards on the 13th to overcome a double bogey on the previous hole. Still, even taking his fringe putts into account, he was only a stroke better than average with his putting for the week. (He missed one from two feet, 11 inches on the 12th hole of the final round.)

As with Singh’s putting, we have to maintain a healthy dose of skeptism about Baddeley being able to keep up the ball-striking he displayed at Riviera. But this was a week that showed what an unpredictable game golf is, even on the highest level.

*Rounding to the nearest foot: Singh made three putts that were inches inside those distances.

For our round of the week, we look at neither Singh nor Baddeley but Phil Mickelson. He finished a disappointing tied for 35th in a tournament he has won in two of the last three years. Mickelson actually drove the ball pretty straight during the week, but was let down by his iron play and putting. A second-round 70 was a typical up-and-down Phil the Thrill ride, with only two routine pars all day, none on the first 14 holes (it was also his only good putting round of the week). Here’s how he shot 1-under with five birdies and four bogeys (numbers in parentheses are yards from the hole):