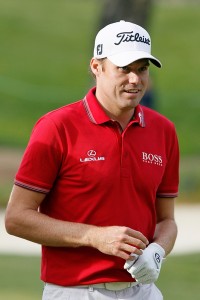 We keep getting reminders of the 2010 PGA Championship, where Martin Kaymer beat Bubba Watson in a playoff that Dustin Johnson missed because of a 72nd-hole penalty. Two weeks ago, Kaymer squared off against Watson in the semifinals of the WGC-Accenture Match Play—and won the rematch, too. This week, the WGC-Cadillac Championship came down to Nick Watney and Dustin Johnson, who were paired together in the final twosome at Whistling Straits last August.

They weren’t playing together this time, as Watney was in the next-to-last twosome and Johnson in the last. A bigger difference was that Watney shot a final-round 67 to win the tournament instead of an 81 to plummet like a stone. And, thankfully, there were no penalties involved.

At Whistling Straits, those four players were all up-and-comers. The fact that they have kept popping up in the seven months since shows that they have arrived.

Kaymer, of course, has really arrived, having reached No. 1 in the world by virtue of adding three European Tour victories (two late in 2010, one in 2011) to his PGA Championship triumph. The resilient Johnson won the BMW Championship as part of the FedExCup playoffs just weeks after the PGA, and Watson won in San Diego earlier this year.

Now Watney has joined them with a post-PGA win of his own—and has not finished outside the top 10 in any of his five starts in 2011. Watney’s Doral victory puts him up there with Watson and Johnson in the conversation about who are the best American players right now.

The No. 1 American spot that has been available since the abdication of Tiger Woods now sits vacant, for all practical purposes. Woods is the top American in the world ranking at No. 5, but he hasn’t won a tournament since November of 2009. Mickelson is right behind him in the ranking, but he hasn’t won since the Masters last April.

If we want to heavily factor in 2011 results for who’s the best American right now we need to look elsewhere. That also knocks out Jim Furyk, who put himself in the picture by earning PGA Player-of-the-Year honors with three wins in 2010 but hasn’t even been a factor in any tournament this year. Nor has Steve Stricker done enough lately.

We can’t entirely discount Mickelson. It’s easy to forget that he finished second in San Diego in his first start this year, a fact that gets lost in his disappointing second half of 2010 and his shaky play in recent weeks, hitting a low point with a final-round 76 at Doral hitting only four (!) greens in regulation. Woods showed positive signs in a final-round 66 at Doral that encouragingly was built of equal parts good ball-striking and good putting. But his tie for 10th was his best finish in an official PGA Tour event since the U.S. Open last June.

The players with the strongest cases are Watson, Johnson, and Matt Kuchar. Kuchar has been a modern-day Tom Kite, winning the 2010 money title thanks to a slew of top-10 finishes despite only one victory. He has continued to be a top-10 machine in 2011, but with no additional wins so far. That tilts the scales slightly toward Watson, with two wins and a major championship runner-up since last June, and Johnson, with two wins, two runs at majors, and a fourth-place money finish in 2010 and a second and a third so far this year. As a bonus, both are fun to watch, Watson with his creative shotmaking married with ridiculously long hitting; and Johnson because you never know what’s going to happen with his blast-away style, a run of birdies or a drive into the boonies.

Now Watney is in the picture. In fact, he’s having a better 2011 than either Watson or Johnson, though since the year is still young we still should factor in 2010 results to some extent. Watney was winless in 2010 and now has three career wins a month short of his 30th birthday.

Watney won with a 67 in the final round, but it wasn’t a tidy 67. It included two bogeys, one on a missed four-footer and another when he took three to get down from the fringe. But it also included some great scrambling in a round when he hit only 10 greens in regulation. Watney visited six bunkers, including consecutive holes (the 5th and 6th) where he hit his tee shot into a fairway bunker and his second into a greenside bunker—and made pars both times.

He was four-for-four at getting up and down from greenside bunkers. On those two front-nine occasions he hit bunker shots within four feet, but on the back nine his bunker saves on the par-3 13th and 15th were thanks to his putting. He holed a 17-footer on the 13th and a 25-footer from the fringe on the 15th. He also got up and down for a birdie on the par-five 10th after his ball settled on a finger of grass within a bunker.

Watney is better known as a good ball-striker, as evidenced by his ranking of 30th in greens in regulation in 2010 and 33rd so far this year. He’s a long hitter who keeps it straight enough to rank 26th in total driving last year and 24th in 2011. But he’s a better putter than he’s given credit for—he was 34th in the PGA Tour’s total putting stat last year.

This year he has stepped up to second in total putting. Even more important is a dramatic improvement in his short game. Watney ranked 146th on Tour in scrambling last year and has been no better than 84th since 2007. But in 2011 he ranks second, saving par 63 out of the 89 times he’s missed the green.

Watney’s final round wasn’t all a scramble. While he hit only 10 greens, eight of his putts for birdies were from 13 feet or less and he made seven of them. He birdied all four par 5s, two of them from the vicinity of the green and two with wedge approaches.

And he clinched the victory on the dangerous 18th hole at Doral with a 316-yard drive into the fairway, a 165-yard approach to just under 13 feet, and a successful birdie putt that gave him a two-stroke cushion on Johnson, who had only one hole remaining. This on a hole that yielded only three birdies all day, a hole where he had driven into the water and made a double bogey on Saturday, a hole where he was 8-over in his 17 career rounds at Doral. In short, the only hole that really deserves the “monster” tag in the course now officially known as the TPC Blue Monster at Doral.

Looking at U.S. players overall, there’s a pretty solid group of nine players at the top, all ranked in the top 18 in the world: Woods, Mickelson, Kuchar, Stricker, Johnson, Furyk, Watney, Watson, and Hunter Mahan. But there’s a big gap after that—there’s only one other American in the top 30, Rickie Fowler at 29th. Nor is there anybody else who deserves to be up there, except maybe Zach Johnson (ranked 33rd).

Two things missing are American depth (what happened to that?) and dominance at the top (the fall of Tiger and Phil). Will any of those top nine emerge in the rest of 2010 to challenge for the top spot in the world? Watney, Watson, or Dustin Johnson could be challenging for it right now if they had seized the 2010 PGA Championship title instead of Kaymer. They didn’t, but the way they’ve followed up since then shows that they might get there yet.