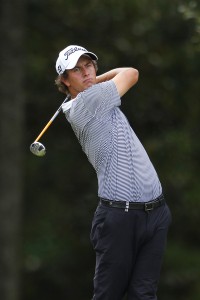 Adam Scott had a quintuple bogey and a quadruple bogey at the Honda. Copyright Icon SMI.

Adam Scott’s career fell off a cliff two years ago, but in 2010 the former phenom got back on track with a victory and reasonable consistency. Now he looks lost again.

So far this year, Scott finished 21st in a 32-player field at the Hyundai Tournament of Champions, missed the cut at the Sony Open in Hawaii, lost in the first round of the WGC-Accenture Match Play, and hit rock bottom by shooting 77-82 this week to badly miss the cut at the Honda Classic.

It was a strange performance at the Honda, in that he didn’t start out badly at all. On a windy day when the leader shot 3-under and even-par was a very good score, Scott was even-par through 14 holes. What’s more, he was playing very solid golf, hitting 12 of 14 greens in regulation.

Then came the par-3 15th. Scott hit his tee shot into the pond to the right of the green. He proceeded to the drop area, from which point he hit a wedge into the same pond. His next shot from the drop area understandably went to the left of the green, and when he failed to get up and down he finished with a quintuple bogey eight.

At the par-3 17th, his tee shot came up short and right, finding another pond, and his shot from the drop area found a bunker. This time he got up and down to save a double bogey, but the damage had been done.

A round where he played good golf on 16 of the holes was ruined by a pair of disasters. The 15th, 16th, and 17th holes are perhaps over-hyped as “the Bear Trap” at the Jack Nicklaus-designed PGA National, but Scott was Exhibit A of the damage those holes can do to a scorecard.

The Bear Trap caught Scott again in the second round. He hit his tee shot into the water again on the 17th, but this time was able to drop next to the green. It didn’t help. After chipping to 11 feet, Scott proceeded to take four putts and make a quadruple bogey seven (he missed his second putt from 2 feet, 11 inches and his third putt from 4 feet, 2 inches). For the two rounds, he was 12-over on the six holes of the Bear Trap.

This time, Scott’s play was not solid on the rest of the course. Starting on the back nine, he shot an 8-over 43 and added a 4-over 39 on the front. He hit only five greens in regulation and hit three balls into the water. He didn’t make a single birdie.

The worst part of Scott’s game is generally his putting. It was indeed substandard this week. Judged by where he putted from, Scott’s 65 putts over two rounds were seven more than he would have taken with a Tour-average performance. But that still would have left him at 152, six strokes over the cut line.

The greater problem was the six shots into the water. Granted, there’s a lot of water at PGA National, and there was a lot of wind. Were those first 14 holes an indication that Scott’s game isn’t that far off, that he just got flummoxed by a couple of bad shots and couldn’t get mentally into the tournament after the quintuple bogey? Or were all those water shots a bad sign that he can’t control his misses by taking danger on one side of the hole out of play?

Another prominent player having an awful start to the season hit five balls into the water in the first two rounds: Camilo Villegas, who shot 79-78. Like Scott, Villegas was a winner in 2010 (he was the defending champion at the Honda) and consistently good performer, missing only two cuts. But so far this year he was disqualified for signing an incorrect scorecard at the TofC, missed the cut at the Sony, tied for 44th in San Diego, withdrew after an opening 78 in Phoenix, lost in the first round at the Match Play, and badly missed the cut at the Honda.

Villegas didn’t have anything worse than a double bogey, but he had five of those in two rounds. One was a three-putt from 2 feet, 1 inch (the second putt was from 3 feet, 1 inch). His putting was six strokes worse than average, but, like Scott, average putting would still have left him far from making the cut. He hit only six greens in the second round and shot an 8-over 78 even with three birdies.

Villegas withdrew from Phoenix because of tightness in his back, so physical problems may have contributed to his rough start. But after the Honda, he’s got a long way to go to get back to where he was a year ago.