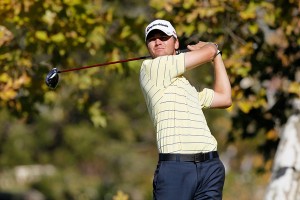 Sean O'Hair won the RBC Canadian Open at 4-under; with normal PGA Tour rough he probably would have been about 12-under. Photo copyright Icon SMI.

There was talk (notably here in Golf.com’s Tour Confidential) that the reason for the extreme rough at the RBC Canadian Open must have been because otherwise the 7,010-yard course would have been torn apart by today’s long-hitting pros.

Well, no, actually Shaughnessy would have held up just fine. The winning score was 4-under par. So, it just doesn’t compute that the course would have been torn apart—say, a winning score somewhere in the 18- to 20-under range (since it’s a par 70, that would mean a total of 260 to 262)—with standard rough.

Based on ShotLink data, I calculated the cost of driving into the primary rough at Shaughnessy as about a half stroke—akin to a pretty tough U.S. Open. ShotLink data shows that for a typical PGA Tour event the cost of the rough is about two-tenths of a stroke.

This means that if the rough at Shaughnessy had been normal instead of extreme, players’ scores would have improved on average by three-tenths of a stroke for each time they drove it into the rough. The fairways were pretty narrow, so players found the fairway only about 57 percent of the time, which means the average player missed 24 fairways. That translates into 7.2 strokes better for the tournament—and actually a little less because some of those missed fairways were in the less punishing intermediate cut.

We also need to add in a factor of the difficulty of greenside rough. Actually, we’ve already accounted for some of it with our cost of rough for fairways missed. That’s based on overall scoring average, so it includes the fact that it was tougher to get up and down when missing the green in the rough. But we still need to account for the times that players ended up in greenside rough on an approach from the fairway. That’s probably only about one-and-a-half times per round or six times per tournament.

PGA Tour stats show that when scrambling from the rough, players get up and down 54 percent of the time. We’ll have to estimate the percentage at Shaughnessy, but let’s say they only managed to be half as good, at 27 percent (I suspect it was better than that). So, for those extra six tries from the greenside rough, scoring would have improved by 1.6 strokes if the rough had been normal.

Adding that to the 7.2 strokes for the cost of driving into the rough, you get an overall difference for the rough of 8.8 strokes compared to a more usual PGA Tour setup. So, instead of 4-under, the winning score with normal rough would have been something like 13-under—and probably more like 11- or 12-under since the leaders were hitting more fairways and greens than the field average.

If fear of a scoring assault on Shaughnessy was the reason for the deep rough (and I’m not sure that it was), it was misguided.