It’s tagged “The Major of the Golf Business” or sometimes “Disneyland for golf nuts.” The annual conclave of the everyone who is anyone in the golf industry and those who want to be someone, is a must-attend however you characterize the week long extravaganza in Orlando. Officially named the PGA Merchandise Show, as usual manufacturers used stars from the PGA Tour and LPGA Tour to bring attention to their exhibits including Bubba Watson, Derek Sprague, Suzann Pettersen, Graeme McDowell, Greg Norman, Kristie Kerr, Annika Sorenstam, Lydia Ko and Lexi Thompson plus other well know insiders such as instructors Martin Hall, Michael Breed and David Leadbetter. 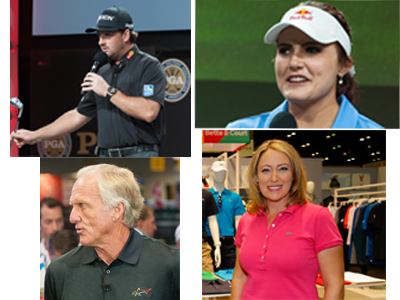 Over the coming months we will report to you the background and lowdown about the newest equipment, accessories and technology on display. However it is significant and though this year did have its share of “latest and greatest,” the primary impression after talking with several dozen industry insiders was optimism for the coming season. That contradicts the often contrary opinion cited in the media and there may be a healthy portion of Pollyanna wishful thinking but it does represent an upbeat look at the business of the game we all love.

According to PGA President Derek Sprague, ““There has been a lot of buzz and sustained crowds conducting business on the Show floor this week. The PGA Show has created an optimistic feel for the golf industry going forward this year.” Comments one might expect from a man in his position but by any measure positive and forward looking.

The general manager at PGA Worldwide Golf Exhibitions (the people actually run the Merchandise Show) Ed Several said there was a healthy increase in attendance at Tuesday’s Outdoor Demo Day with the momentum carried over to the Show as equipment, apparel and accessory manufacturers launched new lines, while the return of live Fashion Shows drew attentive crowds.

A PGA Professional, one of the forty thousand plus at the Show and a long time attendee voiced typical comments. Eric Sandstrum the head professional at Brattleboro Country Club in Vermont said, “The excitement and new products seen at the PGA Show will create a buzz in our golf shop this spring. I come here every year, and it sets the tone and gives us new ideas for the season ahead.”

Among the many presentations were a report of the status of the golf course under construction for the much ballyhooed return of golf to the Olympics in 2016, plans for the KPMG Women’s PGA Championship now being run by the PGA of America and a new web initiative, GolfforHer.com.