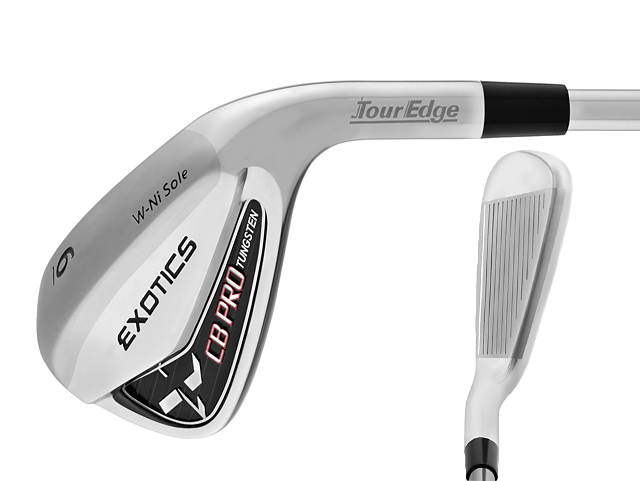 Hybrids and fairway woods from Tour Edge Golf built their reputation as a first class manufacturer and though they make clubs to fill every slot in the bag their irons have always been somewhat under the radar. They plan to remedy that in 2016.

There are three new models under the Exotics brand banner, the EXd, EXi and CB Pro Tungsten. The game-improvement EXds have a variable thickness face with more of it unsupported compared to the previous Exotics E8 model and the undercut cavity has been increased in size—think forgiveness and added distance. The Exi model has a more traditionally shaped head with less offset, a variable thickness face similar to the EXd plus a dual undercut cavity and a sole slot for more face flex at impact.

The model that went through our extensive on-course testing was the Exotics CB Pro Tungsten and according to the company the one with the most technical advancements. The test period was planned to be 10 rounds but after two trips and multiple sessions on the range the number came out closer to 20.

The net effect was having the opportunity to become very familiar with them and in a word the CB Pro Tungstens are solid. Solid sounding and solid hitting.

According to Tour Edge this is the result of two design features. First, each iron from 2-iron (yes, there is a 2-iron available) through the attack wedge is hollow behind the face which provides more flexibility of the thin steel face insert at impact. Plus because the head weight is moved closer to the perimeter there was less twisting on those rare (yeah, right) occasions my swing missed dead center of the face.

Secondly, the sole has a tungsten-nickel alloy weight between 90 and 95 grams based on the iron’s loft…more in the wedges and less in the long irons. With the weight concentrated in the sole achieving a high launch was not a problem, even from the rough, and as those of you who have played out of Florida’s Bermuda rough know, that’s a valuable characteristic for irons.

Trajectory control was very good from long irons to wedges, particularly when a knockdown into the wind was called for and a comment about the grooves on the CB Pro Tungstens is appropriate. During the test rounds playing Titleist Pro V1xs, I can’t remember ever spinning back as many iron shots which says a lot about the quality of the club to ball contact and the grooves.

Pricing is at the low end of the range for irons of this quality and performance: $799.99 for 3-iron through pitching wedge with KBS Tour 90 steel shafts and $100 additional if you want graphite—UST Mamiya Recoil shafts are stock.

Negatives: the hollow construction gives a somewhat thicker topline, a look that took a bit of getting used to and downwind I felt sometimes the ball ballooned but I don’ t have the expertise to place that all on the irons.

Recommendation: If you don’t take a hard look at the Tour Edge Exotics CB Pro Tungsten irons you are missing out. In addition to their performance it’s important to remember comparable competitive eight iron sets is at least $100 higher and sometimes more…a lot more. The value for your money is excellent.