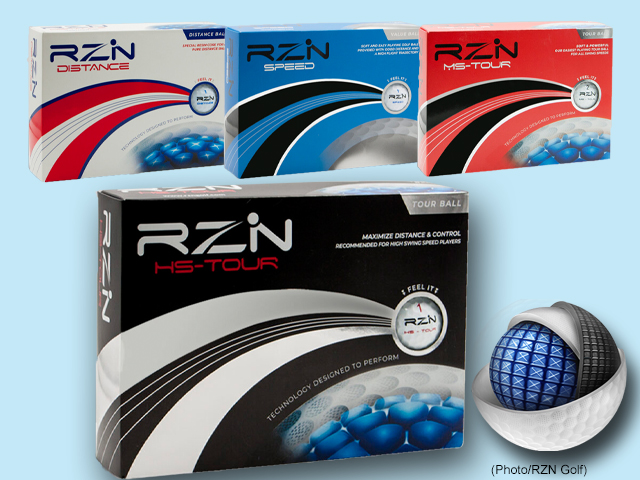 One Liner:
Nike Golf may be gone but the RZN ball is not.

WYNTK:
Feng Tay Enterprises based in Taiwan is a long-time supplier for Nike and in addition to several types of shoes made a portion of Nike’s golf ball line until in 2016 when Nike exited the golf equipment business. They purchased the patents for Nike’s RZN ball technology and their Adtech D&D subsidiary relaunched the RZN brand at the PGA Merchandise Show last January.

There are four ball models—HS-Tour, MS-Tour, Distance and Speed—all have a core formulated from a special resin which the company says is both lighter and faster rebounding that rubber cores plus helps create a higher moment of inertia (MOI) for more stable flight. The inner mantle of the HS-Tour and mantle of the MS-Tour have a textured surface which the company says improves energy transfer.

The dimple pattern of each model includes 13,558 micro-dimples to reduce drag and improve aerodynamics. Sold only over the Internet on the RZN Golf website.

After on-the-course testing by myself and a fellow weekend warrior we agreed the two RZN Tour models were certainly worth a trial by those looking for less expensive alternatives to the Titleist Pro V1 with the RZN MS-Tour and the Pro V1x with the RZN HS-Tour.