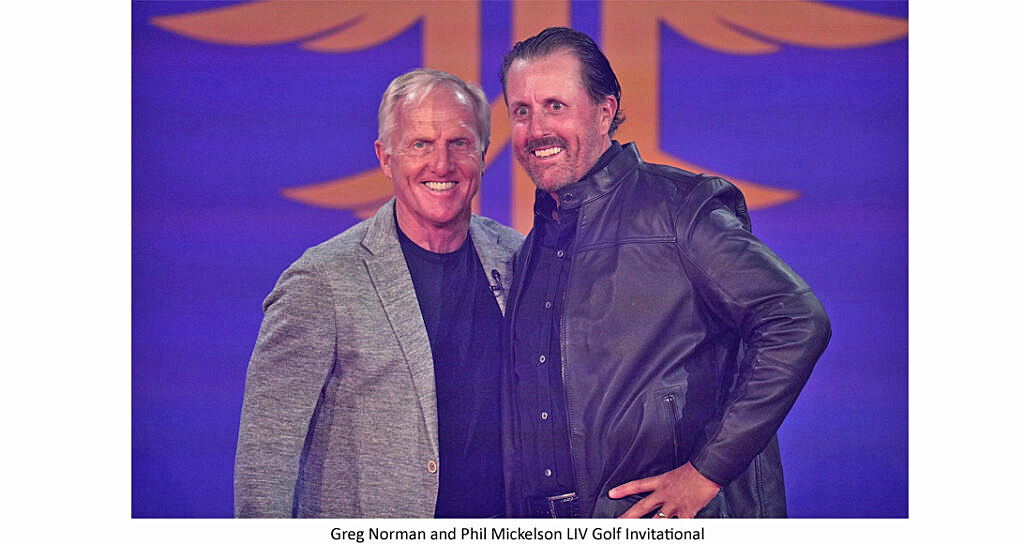 Not since Arnold Palmer and Jack Nicklaus engineered the 1968 split from the PGA of America to start the PGA Tour has the professional game been so wrenched from business as usual. The advent of LIV Golf, the well-financed competitor to the established professional tours, has changed the world of those who are paid-to-play. That’s our top story of 2022 and along with some other interesting happenings the year generated a lot of ink.

PGA Tour vs. LIV Golf
LIV Golf, fronted by Greg Norman and financed by money from the Saudi Arabian royal family lured several top players from the PGA Tour with signing bonuses of $100 million and up plus promises of a limited field 54-hole no-cut eight event series paying prize money to every player regardless of score. The reaction in the usually laidback world of pro golf was as just short of volcanic. PGAT commissioner Jay Monahan withdrew membership status from the players who jumped ship since they now were playing for a competitor and violating their agreement with the Tour. Over the year acrimony and just plain mudslinging have been a stiff price to pay for what seems to many as Norman’s ego-driven revenge for the Tour stomping on his idea of a world tour 30 years ago. Those sticking with the PGAT will receive the benefit of multimillion dollar purse increases which may or may not take some of the sting out of LIV’s millions. Unfortunately, any settlement between the two sides is more likely to be in the courts than on the course.

Woods Hall of Fame
Tiger Woods during his March induction into the World Golf Hall of Fame voiced uncertainty when he would return to the PGA Tour, and as we could have guessed—it was the Masters in April. He finished out of contention in 47th and made his next appearance at the PGA Championship when, visibly limping, he withdrew after a third round 79. The 15-time major winner then withdrew from the U.S. Open and missed the cut at the British Open. While he did not play for the remainder of the year his star power is still undeniable and the soon-to-be-47 Woods draws more attention than any other player by an order of magnitude.  According to Forbes magazine his net worth topped $1 billion thus joining Lebron James and Michael Jordan in that exclusive club.

She’s Baaack!
Lydia Ko, the New Zealand native with the sparkling personality after a spectacular start to her LPGA Tour career all but disappeared from view reasserted herself with three wins in 2022 including the season-ending CME Championship taking home the $2 million first prize. After 14 wins her first four seasons she admittedly struggled and only was able to take the top spot twice in the next five years and 109 starts. That’s all changed now as she is this season’s leading money winner and overtook Nelly Korda as number one in the Rolex World Rankings.

A Damaged Legacy
Phil Mickelson succeeded in shooting himself in the foot multiple times not only by bolting to the LIV series but for some borderline outrageous comments about the PGAT and obvious rationalizations of the LIV–Saudi connection. It’s too bad to have the Saudi-backed LIV Golf series as your legacy to a game that has been so good to you. Mickelson lost sponsorships with KPMG, Callaway and Workday plus was fired as spokesman for the American Express event on the PGA Tour. This year he did not play in The Players, the Masters, or PGA Championship but did in the US Open. It has been speculated Lefty’s gambling debts were perhaps a factor for grabbing the reported $200 million in cash for signing with LIV Golf.

Scheffler POY & McIlroy Number One
Scotty Scheffler won the WGC Match Play Championship for his third win in 42 days and took over the top spot of the World Golf Ranking plus led in prize money for 2021-2022 with $14 million. His fourth win of the season at the Masters was a thrill for all golf fans even those numbed by CBS’s Tiger-centric coverage that featured multiple replays of Woods walking from the 72nd green to the clubhouse. Rory McIlroy overtook Scheffler for in the WGR with victories in the Tour Championship, Canadian Open and CJ Cup which also gave him the FedEx Cup and along the way he took his fourth Vardon Trophy and the DP World Tour’s Race to Dubai. Interestingly the native of Northern Ireland with 23 wins on the PGAT has become an outspoken critic of LIV Golf and Greg Norman while championing the American and European tours.

USGA Roll Back
It’s a safe bet the USGA and R&A, arbiters of the Rules of Golf, are going to adopt a rule stipulating a reduction in golf ball or club performance particularly those played by the elites of our game…touring professionals and top amateurs. For the past several years the USGA has claimed players are hitting the ball too far and this is ruining the game with the only possible solution to be rolling back the distance a ball can be hit. The arguments against roll back are futile since the ruling bodies have already stated regardless of the opinion of others or it would seem, the facts, they are going to proceed. The only question it would seem is whether restrictions will be placed on golf balls or clubs or both. There are any number of comments that might be appropriate but the one this writer has had for many years is this is simply another example how out of touch the two associations are with average golfers.

LPGA Prize Money Increases
Mollie Marcoux Samaan has already made history in just over a year as LPGA commissioner crafting a 33-event 2023 season that will have prize money topping $100 million for the first time, up from $85 million this year. The quality of the play has never been better with venues for next year such as Pebble Beach GL, TPC Harding Park, Shadow Creek and Baltusrol GC reflecting the increasing fan interest. The LPGA is a true world tour with sponsored tournaments in 12 countries and multinational membership.

Women & Golf—A Winning Combination
The burgeoning numbers of women playing golf are apparent even to the casual observer. The National Golf Foundation says the number of women taking up the game has risen by 600,000 in the last two years golfers to a total of approximately 6.2 million. Retailers like PGA Tour Superstore have recognized this growing market segment and are actively promoting instore programs such as group lessons and proactively managing inventory for style and performance.

World Golf Hall of Fame moves to Pinehurst
It was a great sounding idea. Build the World Golf Hall of Fame on Interstate 95 near St. Augustine, Florida, the route millions drive each year seeking fun in the winter sun. There were a lot of reasons attendance didn’t come close to projections and the PGA Tour, the driving force behind the Hall, feels moving it to Pinehurst, N.C. and making it a part of the new USGA testing facility will go a long way to ensuring a viable future.

PGA Show 2022
The January 2022 edition of the PGA Show, “The Major of the Golf Business,” was a shadow of pre-pandemic years as organizers attempted to recover relevancy after the virtual-only show in 2021. Major companies did not exhibit, and the number of attendees fell by 60%. For 2023 there is hope though, a recovery is possible as the largest golf companies such as Callaway, Acushnet, Cobra and Ping have signed up. The Show next January will be the 70th and it has been for decades the primary golf industry meeting not only for nurturing relationships with past customers but finding prospects for future business.