Name a company in the golf industry—equipment, apparel, accessories, etc.—and chances are they will be in Orlando, Fla. next week for the 61st PGA Merchandise Show. What began in 1954 as a way for club professionals from northern clubs covered in snow to buy a few clubs and balls and sweaters for the coming season has become the industry’s global summit.

Run by Reed Expositions in partnership with the PGA of America “the Show,” as it is simply called, expects attendance to be in approximately the same as last year’s 43,000. The Show itself, Wednesday through Friday, Jan. 22-24, with 10 miles of aisles occupies just over 1 million square feet of space in the Orange County Convention Center. It is preceded on the 21st by the world’s largest demo day at the Orange County National Golf Center to allow equipment buyers and members of the media the opportunity to “test drive” new model clubs. One week before opening day 998 exhibitors are listed in the online Show materials though if previous years are followed more companies will be added by the time the crowds arrive on the exhibit floor. 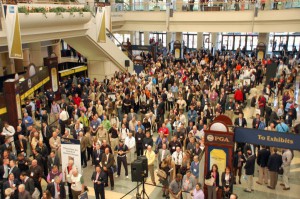 The Show is not open to the public however the Golf Channel will be broadcasting live as part of their “Morning Drive” program plus they have committed to provide other live segments for their news program “Golf Central.” GolfChannel.com will also have regularly updated content and video during the week. PGA Tour SiriusXM radio talk show host Matt Adams will broadcast his morning “Fairways of Life” show all week from Orlando and have live interviews on the floor.

New clubs and the equipment makers take up over half the Show’s space including the 50-station Equipment Testing Center (a.k.a. indoor driving range) built at one end of the Convention Center. The largest booths can’t really be properly called booths but are multimedia, multilevel promotional spaces designed to both show off the exhibitor’s products plus enhance visibility and image in the industry.

The big four club makers by far use the most display space with the largest golf company, TaylorMade-adidas Golf, building a “clubhouse” for Show attendees a

cross the width of the Convention Center. In addition to its own driving range and restaurant, it will showcase all four of the TMaG brands, TaylorMade, Adams, adidas and Ashworth.

And there’s not just equipment but golf services, accessories and anything and everything associated with golf and golfers on display with golf apparel taking up roughly 25 percent of the Show’s display space.

Continuing education for attending PGA Professionals and Apprentices is a big part of the annual Show with conferences and classes (26 at this writing) on three core subjects of instruction, leadership and player development. In addition at Demo Day there will be a series of “teaching the teachers” workshops with presentations by top teaching professionals including Mike Malaska, Suzy Whaley and David Leadbetter.

Golf industry insiders from around the world attend the PGA Merchandise Show and there is no doubt it is the global platform used by industry leaders, the top manufacturers, PGA Professionals and golf organizations to grow the business, participation and interest in golf.