You want to get better—right?

And you know that means lots of practice—right?

Plus you know charting rounds will help find the weaknesses that rate additional attention—right?

But aside from the desire, what are you doing to improve? Take a basic example…how far does your driver go? Bet you don’t know hole by hole or even on average to within five yards…or maybe ten yards. Or, what’s the carry of your five iron…your nine iron? How many putts did you have in the last round or what is your GIR?

Well, you get the point. To improve your score you must know what you do well and what needs added attention, instruction and practice.

And that’s where Game Golf comes in.

t particularly tech-savvy nor do I want to be, plus I’m not interested in some device if it gets in my way physically or mentally. Game Golf fits those criteria in a nice, positive way.

It’s simple to use, after downloading the software to your computer and creating an account, make sure the belt unit is charged and you’re ready to go.

I will admit at first I sometimes didn’t remember to tap the butt of the club (there are buttons you screw into the grips) on the belt unit before each shot but more on that later. However, once it became part of my pre-shot routine I did it without thinking.

Tapping the button on the end of each club marks the spot where you’re hitting and since each button has a different code the belt unit can record, “He’s hitting a five iron.”

When you get to where the ball landed, select the next club, tap the button on the belt unit and hit the shot. As I said—simple.

After the round plug the belt unit into your computer with the supplied USB cable and the software downloads your shots and calculates all the distances and stats. It even lets you add shots so if you forgot to tap before you hit, say your drive, you can add it. GPS based Game Golf ($249) is ready when you switch it on so there no searching for the course you’re playing and it even knows if you start on the back nine or skip a hole.

Since improvement involves knowing what needs improving, by using this system you have all the information 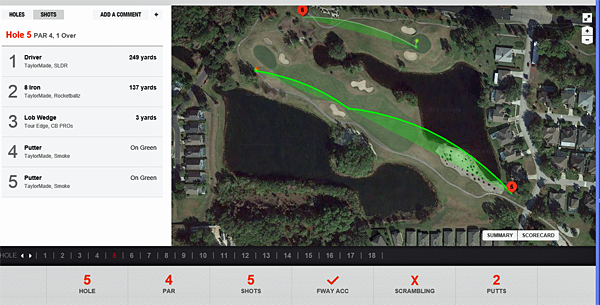 about each round, the individual shots and your averages. Suppose after a few rounds your drives average 210-yards (which by the way isn’t bad for a recreational player) but they are hardly ever in the fairway. Or your putts per round are somewhere north of 32. You can plainly see opportunities to improve.

It didn’t take ten rounds for me to become used to Game Golf. After only two or three I saw while my fairways in regulation number was good and I was hitting 13 or so greens when I did miss my scrambling percentage was not good…in fact it was the worst part of my game. I had thought my putting was or even my mid-irons were but it was the pitches and chips so I have been spending lots of time practice around the green and am beginning to see it pay off.

Could all of this data be written done in a notebook during the round? Sure, and the statistics could be calculated too, but I challenge you figure out the exact yardage you hit your drive on the twelfth hole without some kind of laser or GPS device and Game Golf is the most painless way I know of to do it. And for a sugar topping, the USGA allows Game Golf to be used in competition.

If you want to know your game better and to improve Game Golf is an excellent way to get the data you need.