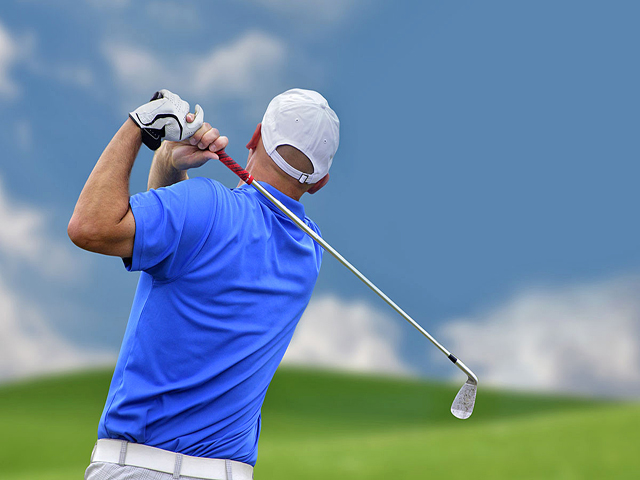 Played golf the other day with a good friend who brought along a gentleman I had never met. After the usual exchange of pleasant inanities my friend mentioned I wrote about golf and the new guy said without any prompting, “Well, I can’t see all this new equipment. Why they just don’t go back to persimmon drivers and a wound ball like the old Titleist Professional.”

After a few more minutes exposing his opinions he came up with the often heard, “The guys on Tour hit it too far. Takes all the fun out of the game and they have to make the courses longer.”

Then with more than a little triumph in his voice he hit me with his clincher. “I’d be just as happy to play 500-yard shorter courses and put skill back in the game,” as though that proved he was a purist and above questioning by those in disagreement.

Clearly, he felt folks with the opposite opinion were somehow lacking in the proper spirit of the game and certainly didn’t have the best interests of golf and golfers at heart.

Having learned a long time ago when two people are on opposite sides of an issue and one bases their opinion on emotion, pointing out facts is both unwise and unproductive. It most often ends up with a harangue by one or the other which can only mean hurt feelings and usually rising tempers.

Since my fragile ego won’t stand a lot of bruising, I opted to shift the conversation to a less controversial topic like politics but not before pointing out his approach lacked even a basic grounding in the facts and ignored some simple truths. My intuitive sense spoke clearly though with the most obvious clue being he looked at me like I 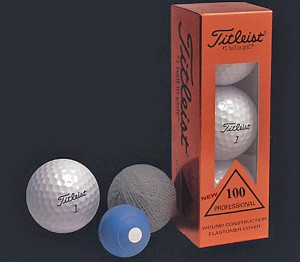 Don’t get me wrong my new friend is not a bad guy but is typical of those in favor of “rolling back the ball” or bifurcating the Rules of Golf or limiting equipment further or in some other way restricting players’ performance. They have a skewed view of the game’s reality in 2018 and little understanding of its current state. Some even advocate putting things back as they were in the 1960s or 1970s or 1980s.

The two uncomfortable truths I pointed out to him but ignored by those wanting further equipment restrictions:

-Though driving distance on the PGA Tour, the best players in the world, has gone up in the last 20 years the scoring average has stayed the same. It’s worth noting that in 1998 the large headed drivers with graphite shafts were all the vogue but a solid core urethane cover ball, such as Titleist’s Pro V1, was not on the market.

-The second uncomfortable truth is the driving distance of recreational players has actually gone down in recent years. Data collected by Arccos, the real time swing app, shows the average drive in 2018 is 217.1 yards down from 220.6 in 2015. 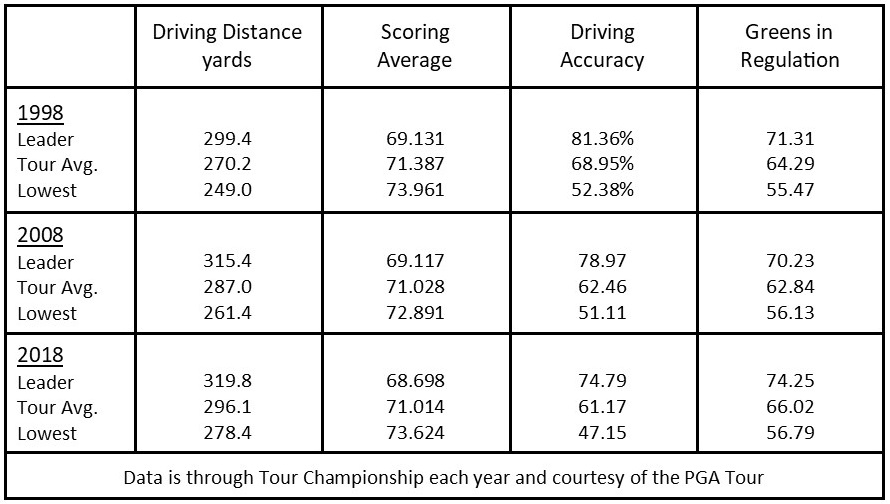 This doesn’t sound to me like there’s a problem other than trying to figure how to add some bonus yards to my own drives when I tee it up this afternoon.

The table also reveals Tour players today are significantly less accurate off the tee and marginally better able to hit greens in regulation, neither of which are calls to man the barricades to repel the heathens.

But, that’s exactly what those with the purist viewpoint would have us do feeling the facts be damned and in effect saying because it’s my opinion it must be right. As David Dusek pointed out in a recent article on Golfweek.com, though long drivers have an advantage over shorter hitters on Tour “it does not appear that the longest hitters in professional golf are getting a more significant edge over their competition.” [emphasis added]

In other words, hitting long is good but we all know that’s always been the case.

Other than my new friend I have never come across a single weekend golfer who wants to hit it shorter and join the purists that believe this frustrating, agonizing, difficult game should be harder. 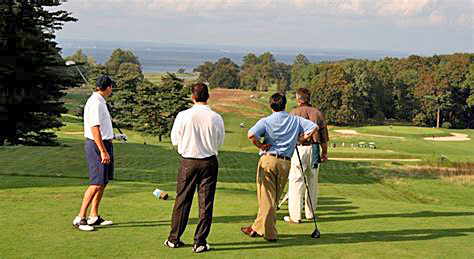 Fans attending PGA Tour tournaments want to see Dustin Johnson and Cameron Champ hit it 300 yards or as Hank Haney puts it so well comparing it to baseball, “They don’t go to a game hoping to see some good bunt singles, they want to see home runs.”

Rex Hoggard on GolfChannel.com quoted comments from Tour journeyman Chris Kirk (4 career wins, 2018 average driving distance 289.8-yards) who said, “The driver and the ball don’t go any further than they did eight years ago. That’s the thing that everybody is missing. Guys are making it go further. People wanting to change the rule and change the ball and change the stuff, it doesn’t matter.”

And then Kirk said in what might be considered a profound closing remark, “Every professional sport, it doesn’t matter, guys continue to get better, that’s just the way it goes. And I don’t see why everyone has such an issue with that.”

Logically of course no one should have a problem because today’s professionals generate the swing speed to hit the prodigious drives we love. The purists’ argument is not logical but somehow in their own minds places them on a higher plane with visions of a kilted piper through the mists. They also ignore the fact golf’s history is filled with one technological improvement after another and indeed it could be argued a major component of the soul of the game is the struggle players go through to take advantage of each new advancement in balls and clubs.

Meanwhile realists and equipment makers become the bad guys bent on ruining the game in the name of profit while pulling the wool over the eyes of the consumer struggling to get rid of his slice.

Now if we can just get USGA CEO and executive director Mike Davis to back off on his goal to “roll back the ball” before his completes his time in office, I can go back and work on getting my driver to go an extra 20-yards.