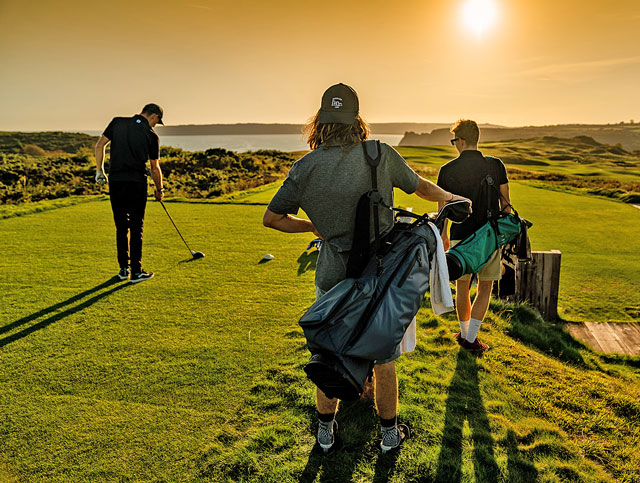 Acushnet Holdings Corp. (GOLF: NYSE) has two franchise brands, Titleist and FootJoy, that dominate in their respective market segments, golf balls and golf shoes. In the ball business Acushnet’s Pro V1 and Pro V1x are the industry standard played by roughly two-thirds of professionals on the PGA Tour and probably an even higher portion of elite amateurs.

But (you know there’s always a “but”) evidently among the prime demographic target millennial golfers, described as young, occasional players, the brand is perceived as not “cool.” Never one to back away from a challenge, Acushnet is aiming at these millennials with a new ball brand called Union Green and building an image around it nothing like the traditional somewhat staid aura of Pro V1 nor the “It’s All About Distance” of their lower cost Pinnacle.

For the first time Acushnet has opted to create a “lifestyle” brand, whatever you take that to mean, and to sell Union Green balls at prices substantially less than the flagship Pro V1s. And in perhaps an even larger departure from business-as-usual Union Green is sold over the Internet directly to consumers, the business model used successfully by competitors Snell Golf and Vice Golf, albeit less so by a few others.

Acushnet is targeting a different player demographic, specifically as stated on the Union Green website, ” We’re not the golfers you see on tour. We’re different. The ones playing local, taking mulligans, over celebrating and always going for it. Club Championships, rule books, 18 holes every time – that’s not our game. We’re here for golf that fits our life. For fellowship. For the love of the fairway. We’re united by the game.”

OK, so at least some of the appeal to younger people not spending time on the range nor grinding over a three-footer is Union Green’s inclusiveness while at the same time certainly chiding and perhaps even mocking the traditional culture with which golf is most often associated.

Referring again to the website, “Union Green is for people who head to the first tee just as they are and love to play the game on their own terms. They play for fun, to escape the routine, and find the golf course as the perfect place to connect with the people who share their passion.”

Sounds like a good idea especially if to someone marketing a 3-layer ball with “green-gabbling control” and “pin-dropping accuracy” selling for $27.99 per dozen such as Union Green’s Pindrop. Then there’s also the 2-layer Teebird, billed as providing “Astonishing Long Distance” which retails for $19.99 per dozen. Free shipping is available with orders of $100 or more.

It will be interesting to watch as Union Green grows since great brands have a lot to live up to and Acushnet/Titleist is probably the most respected brand in golf equipment. Not that they are the best in every category nor that they have always done everything right. For example, only two years ago the Titleist driver then being promoted was known as “short and spinney” which isn’t a great recommendation for any driver but since overcome with development of the TS2 and TS3 models.

A couple of points come to mind.

Is Union Green a me-too tactic due to pressure from direct-to-consumer marketers even though Acushnet has such large a slice of a market–around 50% of the U.S. ball business)?

Another consideration is Acushnet has been vocal over the years in its support of the guys and gals in golf’s trenches, the 28,000 PGA Professionals who run the courses we play. Will Union Green undercut the relationship Acushnet has worked to build with golf shops for sales of their balls, clubs and shoes?

Could the same question be asked about the big box stores such as Dick’s Sporting Goods and PGA Tour Superstore that sell Acushnet’s products?

Is Union Green the indication of a downturn or a reaffirmation of Acushnet business acumen?

All are reasonable questions and it would seem if anyone can make Union Green into a viable ball brand Acushnet can even though they are targeting a small somewhat ill-defined market slice of players looking for a social experience not birdies.