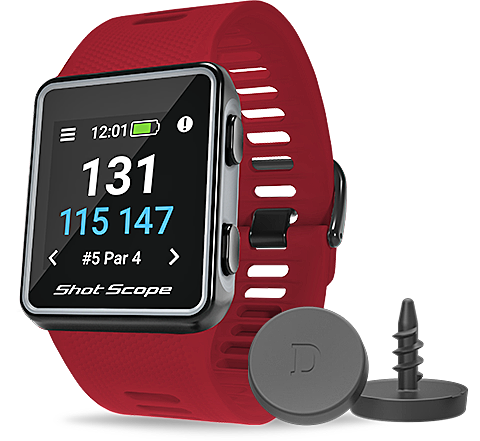 One Liner:
Shot Scope replaces the V2 model with the V3 that combines GPS and artificial intelligence performance tracking in an everyday wearable watch.

WYNTK:
There are lots of golf GPS watches on the market plus several performance tracking devices so Shot Scope knew they had to have something special in the new V3 model that would be both an improvement on the V2 and beat the competition.

To get a charged V3 ready for the first use download the app, register for an account, and screw the tags into the holes in the grip ends of your clubs. The V3 watch must be worn on the lead wrist and after selecting the course, you are ready to tee it up. The V3 can be set to provide just distances using the GPS feature or to track only shot data for later analysis or what is the most useful mode, a combination of the two.

There are several nice features built in to the programming such as allowing you to mark pin location on the green after you putt out, changing automatically to the next hole and a screen showing yardage to the front and to carry bunkers or water.

Post round data may be edited for example if you forgot to mark a pin location and then all your round’s data is uploaded so tendencies, club distances and approach shots plus what Shot Scope says are over 100 statistics may be viewed. We didn’t count how many are available, but it is a lot since data is kept for not only your round but each hole and each individual club.

After using the V3 the standout features for us begin with its size since it is significantly smaller than the old V2, so it looks better…not as clunky. The screen has a color display which a worthwhile enhancement but the fact the screen is easily to read even in direct sunlight is a positive winner. We compared front of green distances shown by the V3 GPS to what we got using a laser range finder and the yardage shown a cart-mounted GPS screen and all three were in close agreement.

Finally if you are one of those who never hit a shot way off line this may seem like a small thing but we really liked the dynamic yardage readout so after a pull hook tee shot to the next fairway the distance to what is now the front, middle and back of the green is accurate.

There is no question the Shot Scope V3 has a practical combination for use during a round of GPS and performance tracking both great helps to improve game management and at a competitive price.