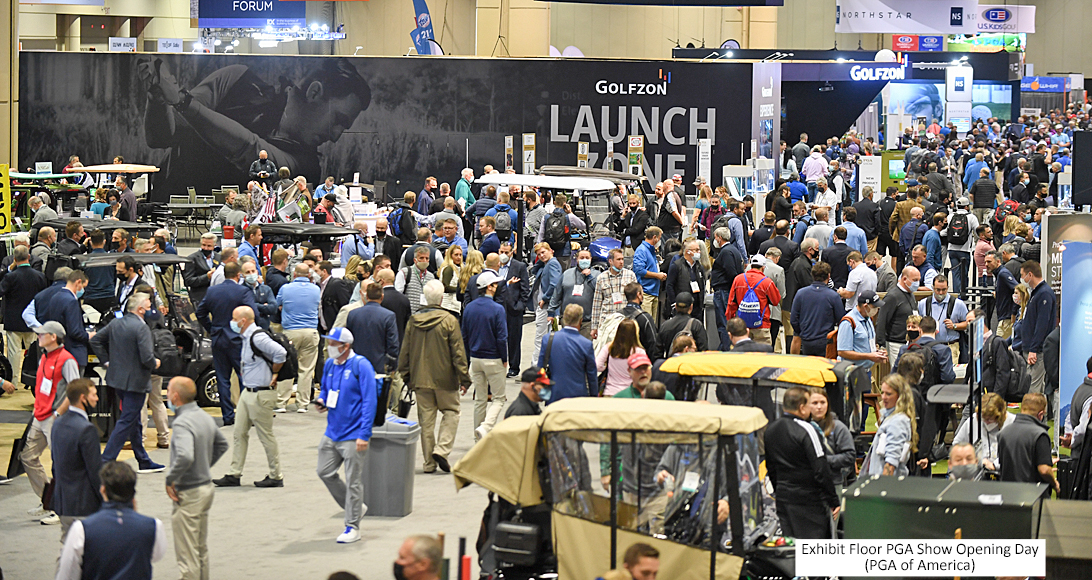 The 69th PGA Show was held January 25 through the 28th in Orlando’s Orange County Convention Center (OCCC) with most attendees voicing the opinion, “It’s great to be back.”

They were referring to the hiatus in 2021 when the Show, due to the pandemic, was held virtually, a dissatisfactory format to many and not worth repeating. The PGA Show is the primary annual gathering of the golf industry with its roots going back to 1954 in a Dunedin, Fla. parking lot where a few golf companies displayed products from car trunks. Over the years it has grown dramatically becoming “The Major of the Golf Business” with some 40,000 PGA Professionals, industry members and media attending the 2020 edition held as it has been for several years in the cavernous million square feet of the OCCC.

The Show serves several purposes for the PGA of America including continuing education sessions for its members and at the same time providing equipment, apparel, gear and golf service companies ready exposure to club Professionals and retail buyers. Many apparel and service companies use the Show to write orders for the coming season as do smaller or boutique club makers, but the larger equipment companies do not since most of their clubs and balls are preordered.

Major Networking
Not to be overlooked though is the other major reason industry members continue to attend year after year and that is the opportunity to meet-and-greet old and new friends plus as a networking event the Show is a must for those wishing to assess the state of the industry.

The Covid crisis however changed the old ways of thinking.

Last year’s Show proved to be less than enthusiastically received with several industry veterans telling me the virtual meeting format was unsatisfactory after attempting to sit through sessions staring at their computer screens. The PGA said frankly they expected the 2022 Show to be less well attended than the last one onsite in 2020 but long-time observers we talked with were surprised by this year’s dramatically smaller size.

Comments about companies staying away due to the unknowns around the progress of the pandemic miss the point. These decisions are made often months in advance and generally are not subject to the latest headlines on the evening news about infection rates and other data.

Some numbers
*Figures are not available at this writing, but a reasonable guesstimate is one-half the number of attendees—in the range of 20,000
*According to the Show’s website there were 578 exhibitors compared with roughly 1,000 in recent years
*Demo Day often has had 100 participating companies and this year 40 were on hand
*Of the 12 largest equipment companies only Bridgestone exhibited and two of the largest apparel companies, Nike and Adidas, chose not to have displays.

Some are of the opinion the 2022 Show was the final gasp of a dying event, one that has lost its viability and relevance. We don’t agree though this year’s Show was a good example change is needed and the PGA has said as much. For instance, registration is one service that needs serious help with hundreds waiting in line the first day to be processed for a badge. The net effect was frustration by those doing the registering and those wanting to register. The bigger question though for attendees and exhibitors is how the expense of travel and loss of time can be justified.

Continuing education courses run by the PGA for the benefit of members, there were 36 on the schedule this year, are already being run at the local section level both virtually and in person. Expanding the local and regional schedules can potentially remove a major reason for club professionals to take a midwinter break in Orlando.

Return on Investment
Golf marketers especially the club and ball companies who in the past have occupied huge amounts of Show floorspace in light of the experience of the 2021 virtual Show have reassessed their budgets. This isn’t inside knowledge just an appraisal of the 11 largest manufacturers deciding to not spend the millions of dollars for a booth and their personnel spending a week doing something that may not provide an acceptable return on investment.

Often particularly equipment company executives have proudly talked about “supporting the PGA of America and club Professionals” by coming to the Show but the truth is different. The old saying “getting a bang for your buck” applies and though the PGA of America has indicated the no-shows will return in 2023 we are not certain that will be the case.

An optimistic guess is most will but not make as large an investment of time and money. They will be doing an even more critical assessment of the potential return.

This leaves networking as perhaps the major reason for anyone in the industry to attend. Most of those who did attend, me included, felt this year was a good but not a great opportunity for substantive conversations. However, it was obvious after the non-networking virtual 2021 Show how schmoozing, meet-and-greet and acquaintance renewal were reinforced as vital communication factors.

Upon consideration the only conclusion is the PGA Show is in transition and though there will be a Show in 2023 you can bank on the fact it will be different and while the number of exhibitors and industry members attending will not hit the pre-pandemic levels many if not most will be back.