At the 2012 PGA Merchandise Show the SwingProfile app won “Best Overall Product” but frankly my judgment was a “wait-and-see” for two reasons. Did it really work or were the results in the demonstrations atypical and could it survive in one of the most competitive segments – swing analyzers – of the golf business?

A year later the answer to both questions is yes. 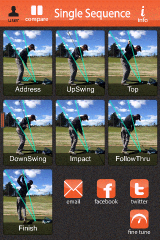 At the 2013 PGA Show there was consistently a line in the SwingProfile booth as Dr. Zeke Chan, inventor and company CEO, demonstrated the uniqueness of his software to teaching professionals, most of whom already were using systems of cameras, computers and screens costing thousands of dollars. Simply put, even these sophisticated and knowledgeable people were amazed at this iPhone/iPad app.

Downloading the SwingProfile app costs $29.99 for the iPhone and $59.99 for the iPad and since it uses the iPhone/iPad live video function it requires no external sensor. The secret to how it works is Dr. Chan’s software which uses the live video to capture the golfer’s movement and then instantly extracts just the swing sequence…in essence “point and shoot” is all the user has to do.

Analysis is done frame by frame so in replay the swing can be shown the same way and since the software captures only the swing movement, not the surroundings, there is no editing. A swing plane line is automatically drawn and there is easy synchronization of two different swings, irrespective of tempo, and matching of key positions.

Swings can be archived for sharing with friends or sent to a teaching professional between lessons and to record progress.