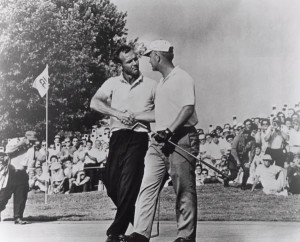 The exact moment was the conclusion of the 1962 United States Open which had been contested over the Oakmont course outside Pittsburgh. Arnold Palmer, “The King” was defeated by someone nicknamed “Ohio Fats.” Golf had changed.

Palmer, given his sobriquet by adoring fans and enthusiastic journalists, was the dominant figure in golf. He had style and swagger, good looks and personality and he was a winner. Often he took the trophy by charging from behind, which of course was thrilling to watch for everyone…except the second place finisher.

Palmer won the Open in 1960 with just such a final round charge but now two years later and on a golf course an hour’s drive from his hometown he was defeated by Jack Nicklaus after a 90 hole battle. Nicklaus, not yet the “Golden Bear,” didn’t interact with fans like Palmer, had a college-boy lack of concern about his appearance and was, what at the time was charitably called, “husky.”

He was a rookie, a college star but still a professional novice with the audacity not only to win the U.S. Open as his first professional victory but to do it beating everyone’s favorite, Palmer.

Nicklaus of course went on to fashion an unmatched career (73 wins on the PGA Tour plus 18 majors) recently added his current take of the events back then.

“At that time in 1962, I was a 22-year-old kid with blinders on, focusing on the task at hand which was winning my first professional tournament and our national championship. Fifty years later, it was nice to take the blinders off and think about all the elements that made for such a meaningful week in my life.”

In celebration of this seminal event the USGA, with financing from Nicklaus-endorsed Royal Bank of Scotland, has produced a one-hour documentary to air on NBC prior to final round coverage of this years championship at Olympic Club on June 17. Entitled “1962 U.S. Open: Jack’s First Major” it is narrated by Peter Coyote and features both archival film and interviews with some who played in the tournament such as Gary Player, Deane Beman, Dow Finsterwald and Billy Maxwell.