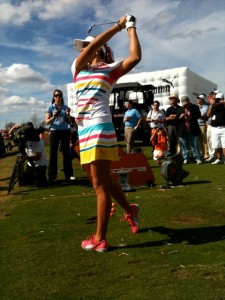 Orlando, Fla. — The message resonating from last week’s 2012 PGA Merchandise Show could not have been clearer: the golf industry must do far more to attract and retain the business of women or continue to suffer the financial consequences.

With the theme of this year’s PGA of America exposition the Golf 2.0 initiative aimed at boosting participation, the game’s luminaries — from the iconic Jack Nicklaus to the LPGA Tour’s youngest and brightest new star Lexi Thompson — preached the need to make golf more accessible and fun for women.

“We’ve lost 23 percent of the women in the game [and] 36 percent of the kids in the game since 2006,” Nicklaus said during a Golf 2.0 panel to kick off the 59th annual summit at which more than 40,000 retailers, industry leaders, and PGA pros gathered to boost the economics of golf. “That’s not a good stat.”

“Women [consumers] spend about $4.6 billion, they influence $15 billion dollars,” Orender, a consultant leading the charge to grow women’s affiliation with the sport, said during a “Consumer Revolution in Golf, Women” panel. “Are you paying attention to me yet?”

It’s not exactly rocket science, speaker after speaker averred, to provide women with multiple tee areas on decent courses, friendly customer service, clean rest rooms, and healthy selections of gear and attire in pro shops. Indeed, if it meant offering golfers the option of playing shorter tracks, fewer holes, or enlarging the size of the cups, Golf World Hall of Famer Nicklaus was all for ways to make golf “easier, more fun, and less expensive.”

The 18-time major champion even took part recently in a non-traditional, one-day event at his Bears Club in Jupiter, Fla. After he and his wife Barbara joined some 20 other husband-wife and father-daughter teams for a 12-hole, best-ball tourney that included putting to holes almost twice the size of the standard 4-1/4 inches, Nicklaus pronounced himself pleased with the response to the experiment.

“Even the guys…all said…, ‘we ought to do this at least once a month, this would be a great event for us to have here, bring the people together and have fun, no pressure on them,’” he said. “It was fun. I enjoyed it and had a good time with it. I think it’s something that we need to do.”

Perennial top golf instructor Suzy Whaley, sitting in on one of many assemblies dedicated to spreading the gospel that women hold the purse strings and the power to lift the golf industry from its financial doldrums, echoed the Golden Bear.

“Women like very much for you to give them small steps that are successful,” said Whaley, who plies her trade at Connecticut’s TPC River Highlands and gained national renown in 2003 when she became the first woman in 58 years to qualify for a PGA Tour event. “It’s not always about technique….People don’t have the time to practice perfection but they have a great amount of time to have fun.”

While men comprised the majority of show-goers cruising the 10 miles of aisles featuring snazzy new gear and gadgets from some 1,000 suppliers, LPGA Tour players were everywhere, shaking hands, signing autographs, and winning new fans for women’s golf. Taking turns smacking 300-yard tee shots with her new Cobra-Puma AMP driver, making the media rounds, and filming “get out and play” promos for the PGA, Thompson made sure to make time to pose for photos and glad-hand her growing legion of followers.

Fresh from a tie for third in a men’s minor league tourney earlier in the week, Thompson held court Wednesday at Cobra-Puma’s annual Demo Day party on the spacious, sun-splashed practice range at Orange County National Golf Center. Men and women, boys and girls — all wanted a moment with the 16-year-old prodigy, and the one-time tour winner was more than happy to oblige.

“I’m having a blast out there [on the LPGA Tour],” Thompson, who noted she may enter as many as 25 events this year — up from some 20 she originally planned to play — told us. “It’s been my dream to just play against the best in the world on the LPGA so I’m just following my dreams and doing what I love to do.”

Lexi’s mother concurred. “She’s loving this,” Judy Thompson said as her daughter smashed shot after shot on the jam-packed driving range. “She loves being around her fans.”

When the exhibition moved indoors the next day, Thompson followed, popping up all over the convention center floor in fashion shows and meet-and-greets. Just chip shots away were several of her LPGA mates, including world No. 10 Brittany Lincicome, who said she had top-ranked Yani Tseng in her sights as she set sky-high objectives for her upcoming season.

“I never thought I would reach my goals in 2011 and I went above and beyond anything I thought I was going to do,” said Lincicome, who earned two tour wins last year. “So I have to set some [targets] that are way out of this world of thinking that I could possibly reach.” Her 2012 aims include becoming No. 1 in the world and winning three titles and a major.

The show served as the backdrop for the naming of Meg Mallon as next year’s Solheim Cup captain and Lincicome expressed her enthusiasm for playing for the four-time major champ.

“She’s a wonderful lady and she’s going to do a fantastic job,” said Lincicome, a three-time Solheim Cupper who added that she hoped to qualify for the team that will play their European counterparts at Colorado Golf Club in August 2013. “The Solheim Cup is always at the top of my list of events I would love to be a part of.”

An hour after speaking with us, Lincicome — currently one point behind leader Stacy Lewis (who called the new skipper her “mentor” after the Mallon announcement) in Solheim Cup eligibility — was still on the floor, pumping hands and greeting fans.

Friday was Paula Creamer Day, as the 2010 U.S. Women’s Open winner did her thing at the enormous TaylorMade showroom and avidly sat through several Q&A sessions during which she dished about the 2013 Solheim Cup (Mallon is “a true American ambassador [and] to play under her is going to be very exciting”), superstitions (the “Pink Panther” always bounces her driver twice in the bag before hitting it), and objectives for 2012.

Thompson’s emergence “really helps the tour” and Tseng’s dominating 2011 “raised the bar,” which meant Creamer had work to do to “try and keep up with” the world’s best. “It shows how women’s golf is growing,” she said. “The level of play right now is very high.”

With so much attention on the distaff side of golf during the show, advocates like long-time women’s-rights activist Arthur Little were heartened but guarded about the progress being made to pitch golf to women. The story Little and his wife Jann Leeming have been pitching for years — about the need for the game’s movers and shakers to recognize the economic power that women wield — may finally be reaching the ears of decision-makers who know they must make drastic changes to survive.

“The bad news for the golf industry is the good news for us,” said Little, who, with Leeming overhauled Maine’s Province Lakes Golf Course to make it one of the women-friendliest courses in the country. The time is now for women to “demand that golf courses do the right thing,” which, he said, is as straightforward as it gets.

“It’s basically so simple,” Little said. “All the choices that men have — for tees, in the pro shop, with food — women ought to have.”