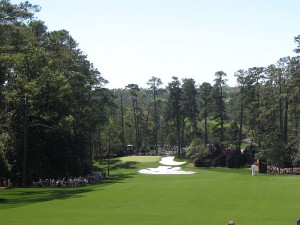 Open-minded golf fans hopeful that Augusta National Golf Club’s 79-year-old “no women need apply” policy may soon go the way of the mashy niblick might not want to hold their breath. The calendar reads 2012 outside the gates of Augusta National, but to the green-jacketed Masters of the Masters Universe, “Gone With the Wind” may as well be the feature presentation down the road at the Masters 7 Cinemas.

Hello, friends. It’s that time of year in Georgia, when the azaleas pop, the dogwoods flower, and the lush fairways and greens of the most revered plot of land in all of golf produce oohs and aahs from even casual viewers tuning in for a glimpse of Tiger Woods smacking a stinger or Phil Mickelson finessing a shot for the ages.

It’s also time for the perennial hand-wringing about the male-only practice of the exclusive club that hosts an annual tradition unlike any other. This year, however, there’s a new twist to the Green Jackets’ discriminatory arrangement: one of three Masters sponsors, and the company that provides the technological infrastructure for the event, has a new chief executive and she’s a woman. That fact has sparked hope, false though it may turn out to be, among those who believe it’s well past time for ANGC to admit women to the hallowed halls of Butler Cabin.

Augusta National has strolled down this Magnolia Lane many times before, most notoriously in 2002, when Martha Burk led a failed attempt to shame television sponsors into ditching the Masters. When they refused to do so, then-chair Hootie Johnson instead eschewed TV spots and famously sneered that no one would force his club to admit female members “at the point of a bayonet.”

This year, the argument came back around just in time for what many believe could be one of the most dramatic Masters in years. With 14-time major champ Woods back in the winner’s circle after more than two years, U.S. Open champ Rory McIlroy looking to put last year’s Augusta debacle behind him, and a star-heavy field of the game’s best primed for the PGA Tour’s first major of the season, the golf world has Georgia on its mind.

Many watchers have expressed optimism that a change could be in the air this year. They base their faith on the notion that, because the club’s powers-that-be have, in the past, extended membership to IBM CEOs, surely they would not break tradition by excluding Virginia Rometty, who took the reins at Big Blue on January 1. Except that the other pesky little tradition of barring women from joining the 300-member old boys club will likely triumph unless Rometty were to take up the cause as her own.

And that, according to some world-weary observers who’ve long fought for women’s rights, was unlikely to occur.

“While this should be a moment of reflection, and I would hope that [Billy Payne, current ANGC chair] would do something, I don’t see that he necessarily will,” Marcia Chambers told us Thursday. Chambers’ “Ladies Need Not Apply” essay for the May/June issue 2002 issue of Golf for Women Magazine helped spark Burk’s protest campaign a decade ago. “Nor do I think, given the draw of Augusta [and the Masters], that IBM would necessarily push for change.”

Chambers contended that, during the Burk-led challenge, IBM and other global companies proudly touted their own anti-discrimination credentials. “Apparently, however, they parked their diversity goals at Augusta’s clubhouse doors,” said Chambers, who recited corporate America’s mantra about the Masters being “one of the most preeminent golf events in the world, rich with history, watched by a diverse worldwide audience….

“There’s a different set of values when it comes to Augusta,” she noted, adding that the tour’s refusal to take a stand on the issue would likely bolster any demurral by Rometty.

“Given the importance of the Masters Tournament relative to the exposure that IBM gets through [its sponsorship], there may be an inclination for Rometty not to make waves,” said Little, a venture capitalist for 30 years before turning his attention — as an affiliate member of the Golf Course Superintendents Association of America and long-time co-owner with his wife Jann Leeming of one of the country’s female-friendliest courses — to making golf more attractive to women.

Jon Last’s efforts as founder and president of Sports and Leisure Research Group have demonstrated the positive impact that female-friendly approaches have on golf. But the Masters is the Masters, and Last believes Rometty’s new position changed nothing within the confines of Augusta National.

“The only ‘issue’ that Rometty’s appointment creates here, is strictly one that the media wishes to advance,” Last told us in an e-mail. As a corporation with “fiduciary responsibility to its shareholders,” IBM would shy away from any public airing of such a controversial question.

Jon Littman, who knows Augusta better than most, thanks to exhaustive research for his hilarious 2005 Playboy essay, “Crashing the Masters,” was a bit more upbeat about the prospects of inclusion at Bobby Jones’ club. At the very least, Littman believes, with IBM’s stock soaring under the new executive’s leadership, Rometty’s ascension to power presented a dilemma for those in charge of membership at ANGC.

“Apparently she is a great CEO and the company is booming, which poses quite a quandary for the powers-that-be at Augusta,” said Littman. “This woman heads one of the greatest corporations in the world, [which provides] the technological backbone behind this tournament.

“I think they’re in a pickle,” said Littman, who suggested that Payne and his cohorts “get their heads out of the sand trap and realize it’s 2012” — exactly 40 years since the passage of Title IX, the portion of the Education Amendments of 1972 that theoretically provided more opportunities for women.

“I don’t think a major entity like the Masters, and Augusta, can afford to be tainted with even the suggestion of sexism in 2012,” Littman said. “To snub the CEO of one of the biggest technology companies in the world would be a huge mistake.”

Of course, it would be a snub only if Rometty were to make an issue of it, and we — like many others — don’t expect that to happen. Augusta National, for its part, keeps such matters in-house, and an IBM spokesperson offered us a blanket “no comment on this matter.”

The subject of if or when Augusta National will admit women members will, no doubt, roil on again next April, but the appointment of Rometty — reportedly an occasional golfer — would seem to offer the old boys at ANGC a dignified way to back into the 21st century. Still, Little pointed out that they’ve passed on similar chances before — particularly when Condoleezza Rice was President George W. Bush’s Secretary of State.

“She’s a staunch Republican…, an African-American woman, and an extraordinary individual,” Little said of the 57-year-old Rice, who has served in a leadership role with the USGA and is reportedly an avid golfer. “That was a golden opportunity there.”

To Little, the time has come and gone for Augusta National to admit women members, but he held out no great hope that the discriminatory policy would change in the foreseeable future.

“My view,” Little said, “is that [Rometty] will politely take herself out of the running in whatever way she can so as not to create controversy.”