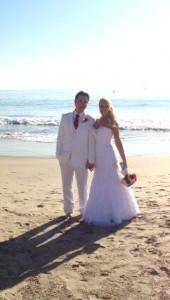 Natalie Gulbis, in a beach ceremony befitting the native Californian’s love of the ocean, married former Yale quarterback Josh Rodarmel on Monday and shared the happy “Mr. & Mrs.” news with fans via Twitter and Instagram.

‘Tis the season, as Gulbis, the winner of the 2007 Evian Masters, made it official shortly after another popular LPGA star, Paula Creamer, proclaimed her engagement to Air Force pilot Derek Heath to her nearly 154,000 Twitter followers. Meanwhile, Cristie Kerr took to Twitter as well to announce that she and husband Erik Stevens had a baby via surrogacy. 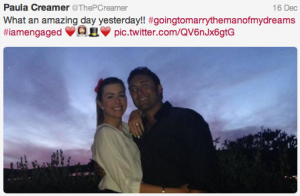 Gulbis became engaged to Rodarmel shortly after recovering from malaria, which she contracted at the first contest of the season in Thailand. Rodarmel was a co-owner of the company that made the Power Balance wristband.

The 33-year-old Heath popped the question to Creamer while the duo was sky-diving, according to FoxSports.com. The fathers of both, who reportedly flew together in the Navy, apparently introduced the two in March at the Kia Classic, where Creamer finished T17.

Kerr went social with her welcome news earlier this month that Mason Kerr Stevens was born on December 8.

”FYI he is our baby. 100%,” @CKGolferChick typed on Twitter. ”I am not physically able to carry our children due to a medical condition. I wish I could.”

Congratulations and the happiest of holidays to all!