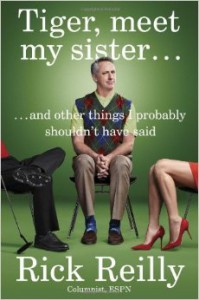 ESPN’s Reilly takes down Tiger Woods, among others, in his new book

Tiger Woods, we imagine, will not be sorry to learn that Rick Reilly is moving to Italy to focus on NFL features, because the ESPN sportswriter really has a bug up his butt about the 14-time major champion.

“Tiger, to me, is the exact opposite of [failed professional football player and openly Christian Tim] Tebow; you admire the game but not the man,” Reilly said on Monday during an appearance on Baltimore’s 105.7 The Fan to pitch his new book, “Tiger, Meet My Sister…And Other Things I Probably Shouldn’t Have Said,” which hit stores on May 13. “Tebow, you admire the man but not the game.”

The book is a compilation of a bunch of Reilly’s favorite columns, and anyone familiar with his ESPN.com and ESPN The Magazine work knows that the author is probably not at the top of Woods’ Christmas card list. Reilly, who is retiring from the column-writing business, will type his final ESPN.com piece on June 9, the same day the National Sportscasters and Sportswriters will induct him into the organization’s Hall of Fame.

“Tiger doesn’t have manners,” Reilly said on Monday by phone to the guys at The Fan. “He swears. He doesn’t tip. He doesn’t pick up the check. Every joke is dirty. But [he’s] a fabulous player…who I think will still win majors.”

Reilly, who has never shied away from taking down any of his subjects, even threw Woods’ father Earl under the bus in his rant about the evils of Tiger.

“When you’re around [Woods], its always amazing [that] Earl didn’t teach him any manners,” Reilly said. “It was just, come in, win the tournament, act like a boor, and leave.”

Mickelson, on the other hand, is as generous as Tiger is penurious, according to Reilly.

“I’ve seen Phil leave a $100 tip after a 50-cent glass or lemonade at a little kid’s stand,” claimed Reilly, who observed that when Mickelson won his first of three Masters in 2004, Lefty tipped each of the clubhouse guys $2,500. “Whereas Tiger, you should get a court order to open his wallet.”

Like the Woods-Tebow contrast, Peyton Manning is the anti-Tiger to Reilly, who noted that after the 2012 shootings in Aurora, Colo., the newly signed Denver Bronco QB telephoned families to offer his support.

“He’s sort of the opposite of Tiger,” said Reilly. “He’s got that old-world charm and that is a guy who was raised right.”

Reilly is also no fan of Woods’ pal and Ryder/Presidents Cup motivator/hanger-on, Michael Jordan. Though “the greatest athlete I’ve ever covered,” the former Chicago Bull was one of the least gracious competitors Reilly has ever had the displeasure to know.

Still, Jordan gets higher marks from Reilly than Woods, because — despite an inelegant, “scorched earth” Hall of Fame induction speech, in which he bad-mouthed everyone from his famed UNC coach Dean Smith to an unheralded high school teammate — Jordan at least gave good interview.

Tiger blows us [reporters] off all the time,” Reilly complained. “Jack Nicklaus always stood and answered every question.”